A large number of esports tournaments use a group format that’s not used outside of the space. We’ll take a look at the format commonly known as GSL-style groups, how it works, where it came from and how many events use it.

How does the GSL-style format work?

The GSL-style format takes a significant amount of influence from double elimination brackets. Essentially, the first two games are played as normal, with the winning team going to the winners’ bracket and the losing team to the losers’ bracket.

Teams competing in a GSL-style group have three attempts to qualify out of the group. Pick up two wins, and you progress in the tournament. Lose twice, and you suffer elimination.

While we used a bracket to illustrate the structure, traditionally GSL-style groups are displayed in a table, similar to round robin groups. In a four team group it’s relatively simple to understand which teams have qualified and which have been eliminated, with the split being directly down the middle. 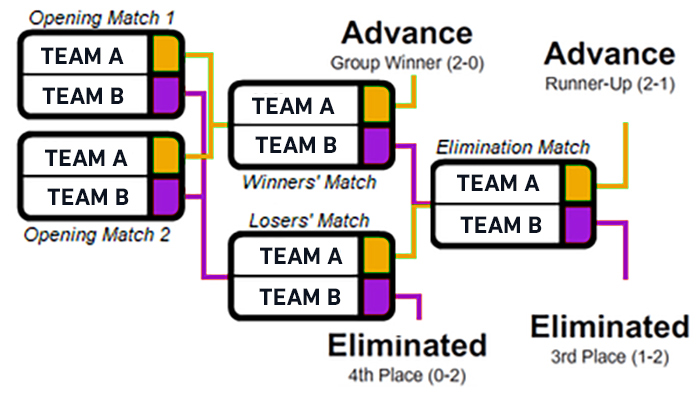 The format is incredibly versatile and can be utilised within tournaments that use any form of series format, from best of ones all the way to the potential for best of sevens. It can also be modified to allow for a variety of competition, one example being through putting three teams forward and dropping a match in the group stage of an event, or by simply doubling the amount of teams taking part. Another alternative is to use it exclusively for seeding purposes, thus placing the teams into different parts of an upcoming bracket.

Naturally, there are limitations to the format. A major one is that due to the nature of groups, the most teams you will play is three. When groups are used at major tournaments, and you’re attempting to seed the playoff bracket, you can end up with a number of unexpected results. Add the fact that you only need two wins to go through, or two losses to go out, and a poor start in the morning can see your tournament potentially cut short.

A format like Swiss, for example, plays a significantly larger amount of matches. Each team takes part in a minimum of three, and a maximum of five, and every team has a chance of playing against one another. This resorts in a larger pool of matches and, theoretically, allows for a much more precise seeding going into the tournament playoffs.

What are the origins of the GSL-style format?

The GSL-style format, also known as the dual tournament format, has its origins in StarCraft. While its name comes from the tournament that popularised it, the Global StarCraft II League, it was first used nearly a decade before that tournament series began.

The GSL-style format can also be modified to allow for a variety of competition.

The format’s first notable use was in the qualification stages of the 2002 SKY Ongamenet Starleague. It was used as an alternative to the round robin, to both cut down on the amount of matches played to speed up the tournament and to make sure that the use of tiebreakers weren’t required.

It was used occasionally in the original StarCraft before SCII was released, and was popularised through the tournament that shares its name in 2010. It only started to be ported to other games, a few years later, in 2012, after the release of a HLTV.org article discussing tournament formats. It took over a year for the first CS:GO event to utilise the format during DreamHack Bucharest 2013. From then on it became the format used at the first CS:GO Major, DreamHack Winter 2013.

What tournaments is the GSL-style format used in?

The GSL-style format is used in a number of esports events. Unsurprisingly, it is still a regular feature in the StarCraft II circuit, being utilised in a number of GSL tournaments, including Code S and the World Championship Series (WCS) circuits, and was seen at the world finals at Blizzcon in 2019.

Teams competing in a GSL-style group have three attempts to qualify out of the group. Pick up two wins, and you progress in the tournament. Lose twice, and you suffer elimination.

Outside of StarCraft, the format receives a lot of attention in CS:GO. Excluding the BLAST Premier Spring Series, the three of the first four offline events of the 2020 season all featured a form of the GSL format. In 2019, six of the nineteen offline S-tier tournament finals that took place used a pure version of the format, with another eight using a variation on the format.

The events that didn't use the GSL-style format either kept traditional with round-robins and went straight into a playoff bracket, or took on the Swiss-system, as has been seen at every CS:GO Major since the start of 2017.

Besides the two main users of the format, a number of other titles use it: events that take place in the original StarCraft, Rainbow Six: Siege for a number of events, including its annual Six Invitational, and Dota 2 for a number of events in its Major and Minor calendar. League of Legends is the one main title where the GSL-style format doesn't see much use, with all of the major tournaments utilising round-robin group stages instead.

The perfect system for esports tournaments doesn't exist. Each event requires a different structure that leans off the way the tournament has been designed. The GSL-style format has become a mainstay of competitions in a number of esports titles, proving to be a very effective way of progressing a tournament.