One of the esports industry’s current growth hotspots is found in China. Regularly challenging, and beating, the likes of North America and Europe in terms of competitors, sponsorship and viewers, it’s worth knowing what’s popular in the country.

Brief history of esports in China

As with most countries, you can track the history of esports in China back to the mid 1990’s, when access to the Internet became more widespread. Assisted by the growth of PC gaming cafes, similar to South Korea’s PC bangs, esports started to gain an early foothold with the likes of Command & Conquer and Quake II from 1996 onwards.

As in South Korea, it was StarCraft 2’s release in 1998 that helped establish esports competitions in the country. In fact, South Korea and China had fairly similar trajectories in esports growth in the early-to-mid-2000s, recognising esports as a sporting discipline in 2003. In 2019, the Chinese government officially recognised “professional gamer” as a job title.

As with most of the world, it was League of Legends’ entrance to esports in 2009 that acted as a true catalyst for growth for esports in the nation. The game’s top division in China, the League of Legends Pro League (LPL), is currently the third most popular professional sport in the country, behind basketball and soccer, according to the game developer.

From the teams and selling out stadia for the LPL, to the sizeable player base, LoL is arguably the most popular game in China

China was also the first major League of Legends (LoL) region to open itself to franchising: after the 2017 spring season the league signed permanent deals with twelve teams. Since then, the LPL has steadily increased team numbers once a year, with the league currently holding 17 teams. Since that change, Chinese teams lifted the LoL World Championship title two years in a row, 2018 and 2019.

China also has a major influence in the esports sector on the business side. Riot Games, publisher of LoL, is wholly owned by Shenzen-based media conglomerate Tencent. Activision Blizzard, publishers of StarCraft 2 and Overwatch, are partially owned by Tencent, and use NetEase to publish those games in China. E-commerce Company Alibaba owns and operates the Olympics-style WESG tournament, that offers some of the largest prize pools in esports.

Why esports is popular in China

Esports reached a level of success in China for a multitude of reasons. A major contributor to this is how PC games themselves are popular. Between 2000 and 2015 video games consoles were banned in the country. While such devices took a large portion of the gaming market in the western hemisphere and Japan, in China it sent potential gamers to PC, mobile and web platforms instead.

Part of China’s esports growth is down to how many people simply play video games. It is estimated that around 70% of China’s online population, 560 million people, play video games. Considering games like LoL are the most popular in the country, it’s not difficult to convert that player base into viewers.

In 2016, the Chinese government recognised the country’s global competitiveness in the industry and put a renewed push behind esports. This vote of confidence brought a whole host of investment into Chinese-based esports teams, leading up to the franchised LPL, and allowed a wide range of supporting content.

The two most popular esports in China are in the Multiplayer online battle arena (MOBA) genre. LoL is, arguably, the most popular esport in China. From the LPL, to the sizeable player base, to regularly selling out stadia for their top level league.

Chinese teams won the two last LoL World Championships, Invictus Gaming breaking South Korea’s hold of the title in 2018 and FunPlus Phoenix taking the trophy last season. The country is set to hold the 2020 World Championships, with the grand final set to be held at the Shanghai Stadium in the country’s largest city. 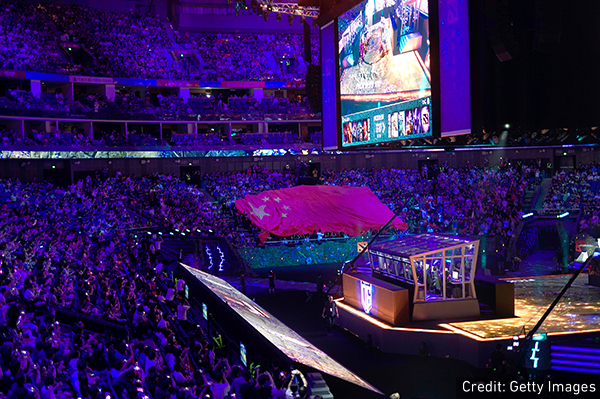 Dota 2 is also a significantly popular game in the country. In The International, the biggest competition for Dota 2, Chinese teams have won the title on three occasions, more than any other single country. The Mercedes-Benz Arena in Shanghai held the ninth edition of the competition, the first time outside of the Western hemisphere, selling out the 18,000 capacity stadium.

After LoL and Dota 2, the remainder of the field is packed much more closely together. Collectible card games like Hearthstone take notable mentions, as do Autobattlers like Riot Games’ Team Fight Tactics. RTS titles like StarCraft 2 also hold a firm place in the country’s esports scene, even if the game has a smaller share than it once had.

In terms of FPS titles it’s a mixed bunch. In Overwatch, four of the five teams in the Overwatch League’s Pacific East division are based out of China. The country contributes 15 of the league’s 200 players, the third highest contributing nation after South Korea and the USA.

Traditional FPS titles, like CS:GO, aren’t as popular in China. In CS:GO’s case, the game wasn’t officially launched in the territory until Valve partnered with Perfect World to launch a Chinese Steam client in 2017. Until then, it was Crossfire that had essentially all of the market. The game, developed in South Korea and had a large Asian following having launched in 2007, is incredibly similar to the original CounterStrike title in the franchise.

Mobile esports are also a popular niche found in the country. Titles like Arena of Valor, also known as Honor of Kings or Kings of Glory, Clash Royale and even PUBG’s mobile offering have seen significant growth since 2018. All of those games have top level esports scenes. Arena of Valor, for example, has the King Pro League (KPL) in China. The KPL has a format reminiscent of traditional sports and the Overwatch League, featuring home and away matches at individual team venues.