In this special edition of the Pinnacle Power Rankings we recap one of the most unique years in CS:GO history.

Similar to other power ranking approaches, Pinnacle's will be centred upon the same selection of performance metrics month-to-month. However three key qualities separate our rankings and those already offered by other community entities. There will be no distinction made between the prestige of tournaments, nor their prize pools. The rankings will only include performances at tournaments and leagues, including qualifiers, with a minimum prize pool of $50,000. However, there will not be any measure of bonus points for placing higher at those tournaments, as it will be naturally embedded in the rankings for successive positive results.

Scandinavia once again tops the annual list of this long running FPS game. Barring SK's year of dominance, either a Swedish or Danish team has topped the list.

The Pinnacle rankings will also contain weighting based on closing Money Lines. All teams, within the sample tournaments, will be placed on a scale to measure how they have performed in comparison to their pricing. While it will not account for covering particular spreads, either series or map, round discrepancy and map win rates are of course covered.

Another distinction from our power rankings and others will be the time frame. Due to the entries being once a month, and the frequent turnover within the scene during that length of time, teams that did not play during the month will not be included. While sites like HLTV will factor decay into their ranks, ours will intentionally not do so to avoid incorrect assumptions of a change in level based on distant results.

Finally there will be no 'eye-test' applied to the ranks. While it may not seem right to find teams of a lesser pedigree above the well-established 'Top 5', the goal is to assess performance over a one month period alone. These entries are solely meant for contextual betting analysis, however there will be a feature looking ahead to the upcoming tournaments.

In this special edition of the Pinnacle Power Rankings we recap one of the most unique years in CS:GO history.

For the final seven months of 2020, through the first-ever “online era”, the Pinnacle Power Rankings covered the best performing teams at the most prestigious tournaments on a month-to-month basis. There were 88 teams assessed playing a minimum of four maps, amounting to over 1100 matches in total.

However, we never accounted for the results beyond those individual samples. Additionally, there was a period before the COVID shutdown, when we were able to witness a bit of offline action. Those results heavily impacted several of the teams on this list.

For example, charity event Gamers Without Borders 2020 was not included in these rankings. In fact, it was the only tournament which fell into the necessary prize pool category but was omitted. This was due to the event having added two new maps not otherwise witnessed in professional play in 2020, and the map format only required 13 rounds for a win, instead of the standard 16.

It’s not only events which were omitted from the list. Gambit held the best kill/death ratio, however their sample over the tournaments assessed was too small to be considered. It should be noted they also only played three teams on our list: Natus Vincere; Astralis; and Complexity - only picking up a win against the latter.  Perhaps in 2021 we will get to witness this CIS organization return to power!

So, looking back over our monthly Power Rankings, the best CS:GO teams in 2020 were: 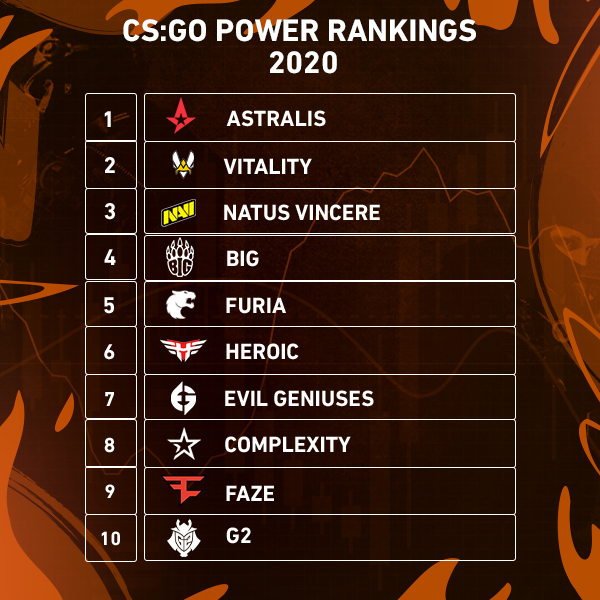 Scandinavia once again tops the annual list of this long running FPS game. Across CS:GO’s lifetime, only the Brazilians, SK Gaming were able to pull the world number one title from this northern region’s grasp (back in 2016 and 2017). However, in each year before or after it has been a Swedish or Danish team to own this distinction.

Though they finished at the top on our, and several other, rankings, 2020 still had its own set of challenges for Astralis. As we rounded out of the spring, and the early part of the online circuit, there was a torrent of rumours and media speculation as to the inner conflict happening in the organisation. The rumours were somewhat supported when the Danes became the first organization in CS:GO history to add a permanent sixth man to their active roster.

There were 88 teams assessed playing a minimum of four maps, amounting to over 1100 matches in total.

Additionally, Astralis were mocked within the community when members of their team were said to be needing time off, due to being unable to cope with the intensity of the top tier schedule, as well as their official practice. Their form fell significantly during this period, when they had three new players rotate in. It was the only time of the year we could catch them consistently priced below 50%.

All in all, Astralis played 191 maps this past year, and faced the toughest level of opponents in 65% of those matches. Despite this, they held the best map (68%) and match record (70%) of those that had competed against a similar level of team over a respectable sample size. More impressively, they held a 59% win rate on all six maps they played - 58% on the CT-side and 51% from the attacking T-side.

Astralis were able to sustain a positive conversion rate in 10 out of their 12 halves played, despite playing with nine different player compositions. However, one side of one map stood apart - CT Inferno. Across all levels of competition, their Counter-Terrorist hold dropped in 2020 between 2-5%. This represents a significant shift in the meta. Astralis converted nearly 63% of their rounds on the defence, while the next closest team on our list, FURIA, trailed behind by around 9%.

You might be thinking “so what, it is only one side of one map?”, solet us reflect on the significance of both the statistics and the map. The most played map of all time is Mirage, which very clearly became the Danes’ permanently banned map through the entirety of the year. The runner up is Inferno. Since 2019, however, Inferno has no longer played second fiddle to Mirage, and has been the most popular map to be chosen in competition for the past two years. While this does not apply to all tournaments and all levels of competition, it has consistently been at or near the top.

Knowing now that Astralis’ best map, at a 77% win rate, is one of the most commonly played maps is surely intimidating for all levels of opposition. The Danes were not perfect on it, dropping it nine different times to six different teams, however not one team held a winning record against them. Fnatic and Vitality, with 2-2 and 1-1 records respectively, are the closest two squads. The other significant edge to this map is the frequency with which it is the decider. The Danes also punished teams in this scenario, running up an 80% win rate when it was played as the third map.

In terms of profitability, Astralis provided there also. Though they had the shortest average price facing the field, meaning they were the best of the best, bettors would have still made over 10.5 points of profit backing the Danes on the Money Line blindly in 2020. If one were to have skipped the matches with Jakob "JUGi" Hansen and Marco "Snappi" Pfeiffer - when the team were going through their biggest losing streak in nearly three years, dropping six out of seven matches, and their price was the most enticing it’s been in recent memory, we are looking at almost doubling that return. If one was to back the Danes in only best-of-three and best-of-five matches, even better. Hindsight is a beautiful thing, isn’t it?

We are not entirely sure what the 2021 circuit will hold. However, the tournament organizers, teams, and fans performed beautifully this past year, so we can be sure the next calendar year will be full of plenty of top tier CS:GO action.