While you may know your Inferno’s from your Dust2’s in the CS:GO map pool, knowing the names of each part of the map may not be in your wheelhouse. Read on to get a better understanding of where exactly these places are that casters and players talk about.

In CS:GO, effective communication must be quick and concise. You want your teammates to be able to react to what’s happened immediately, so any delays caused by names can be detrimental to your chances of winning. Some callout names might be shared between maps, while some may only be used for one specific place.

Thus, callouts were developed to refer to places in each map to help facilitate communication. A lot of these names may be different in various countries, regions or languages, as they tended to be created by the various communities that have existed in CounterStrike. So if you’re a veteran player of CS:GO and these don’t look right to you, it could simply be down to where you’re from.

A number of callouts on maps are named after pro players. Sometimes this can be down to these places being known as their “iconic” spot. The best known example is on Cache, a map not currently in the map pool. On the B-site, the corner between the “quad” area and the squeaky door is known as NBK, after Nathan "NBK-" Schmitt. This is due to the fact that for a considerable amount of time, he’d be positioned there and more often than not pick up a number of kills in one round. 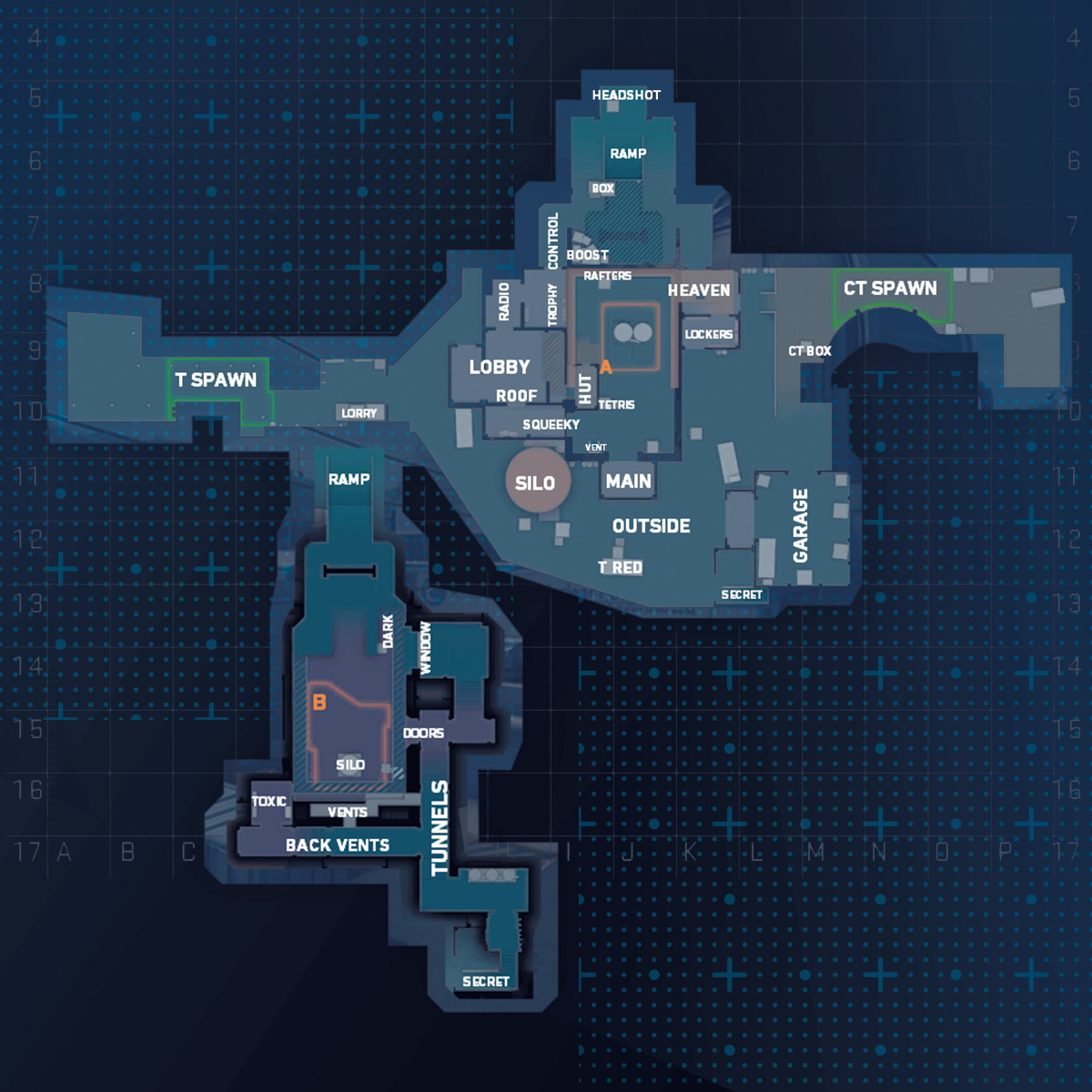 Nuke is one of two maps that exists on multiple levels. While on a lot of maps you can trust your hearing and understand where people are based on hearing, Nuke is more difficult as footsteps from below or above you can occasionally mislead you on their position. As such, getting callouts from teammates on the relevant bombsites is especially important. 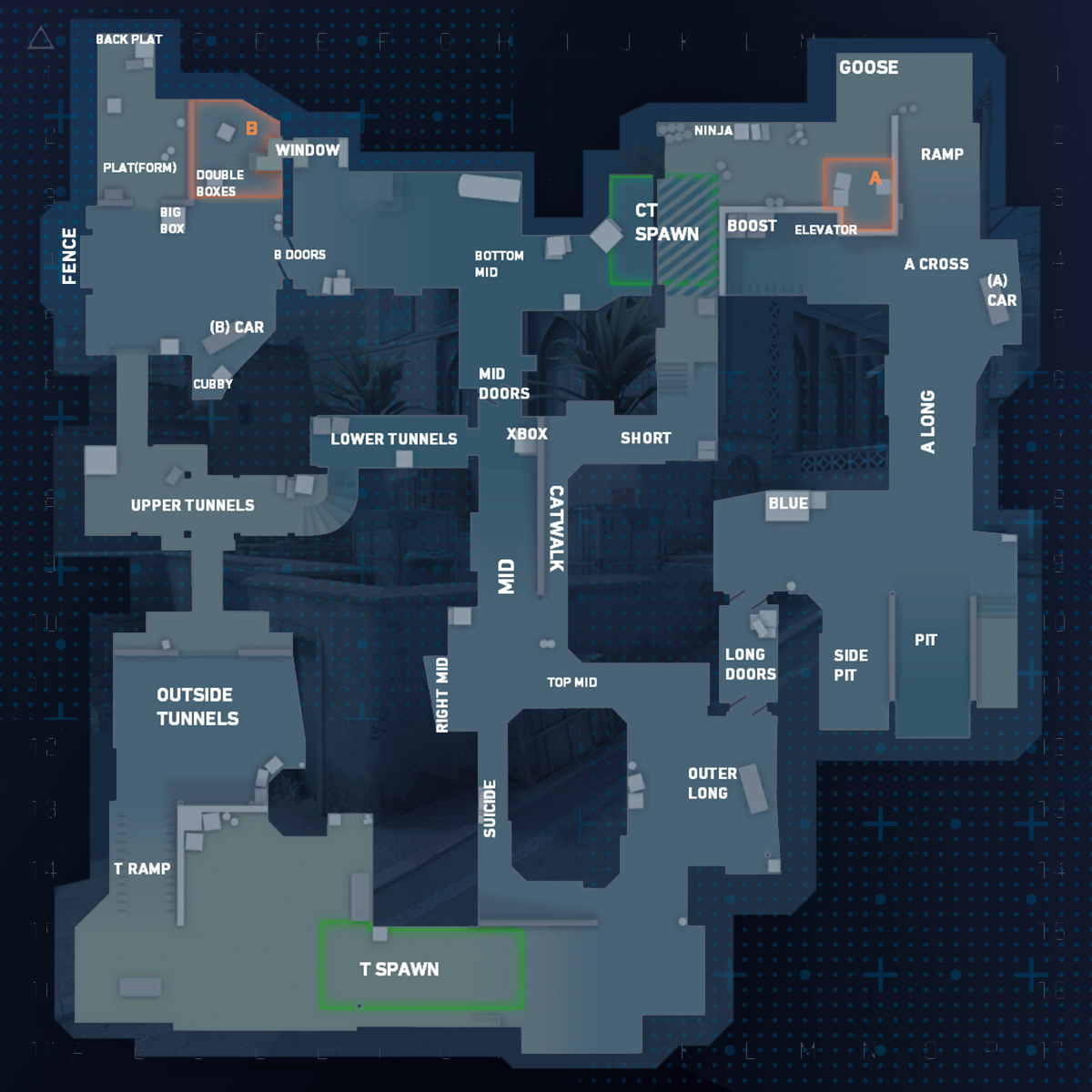 Dust2 is the classic CounterStrike map, having been used in a competitive setting since the 1.6 edition of the game series. It is the most balanced map in the pool, with the round win rate hovering around 50% for both T and CT sides. The layout is simple, with two main routes to each bombsite flanking a “mid” area. 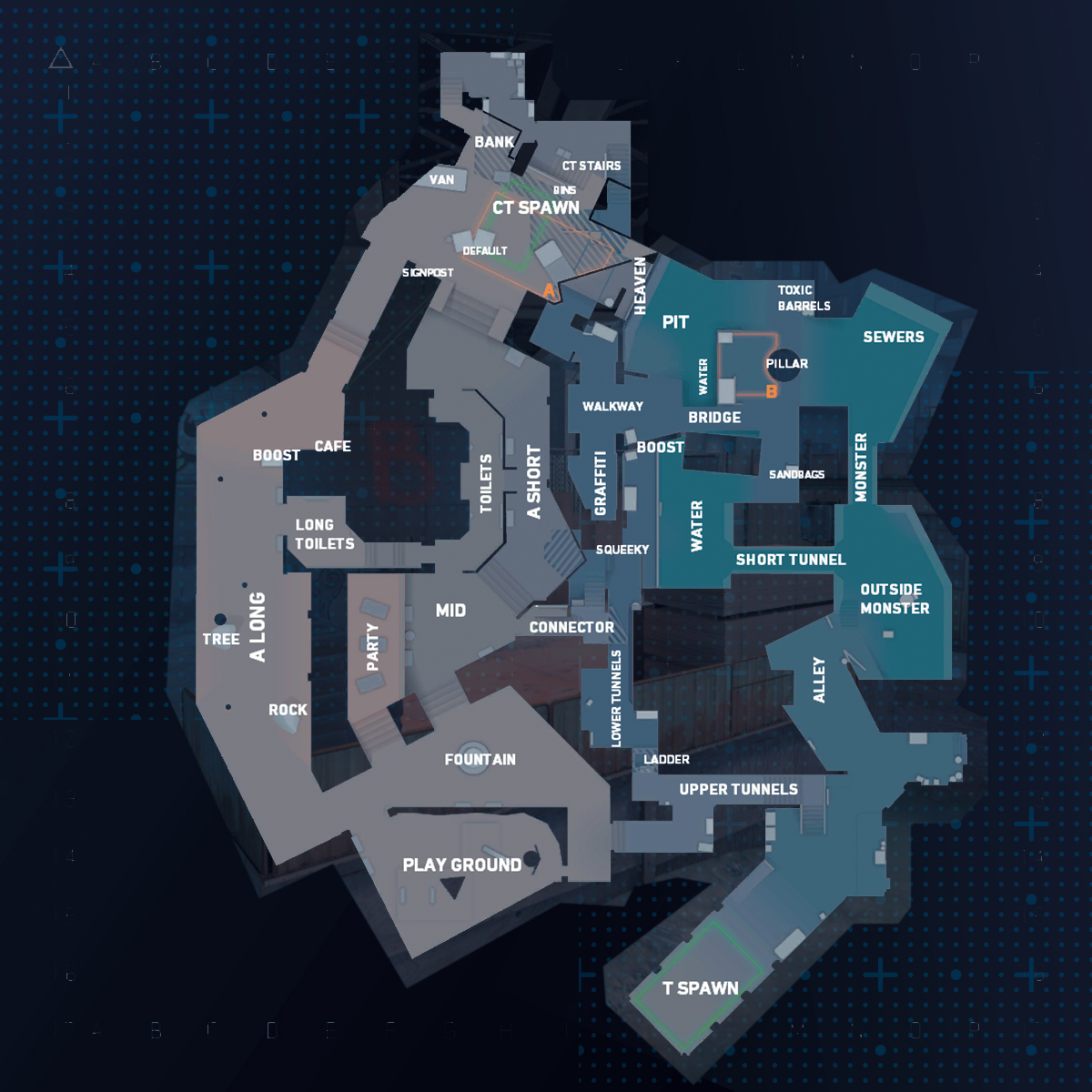 Overpass joins the ranks of Nuke and Vertigo with its verticality. The map is unique in that the CT-spawn sits directly on the A-bombsite, and has incredibly fast rotates to the B-bombsite. While it lacks a traditional “mid” area, it features the two different methods of reaching bombsites as in the traditional styled maps, with a connector area that allows access between the two sites before the site itself. 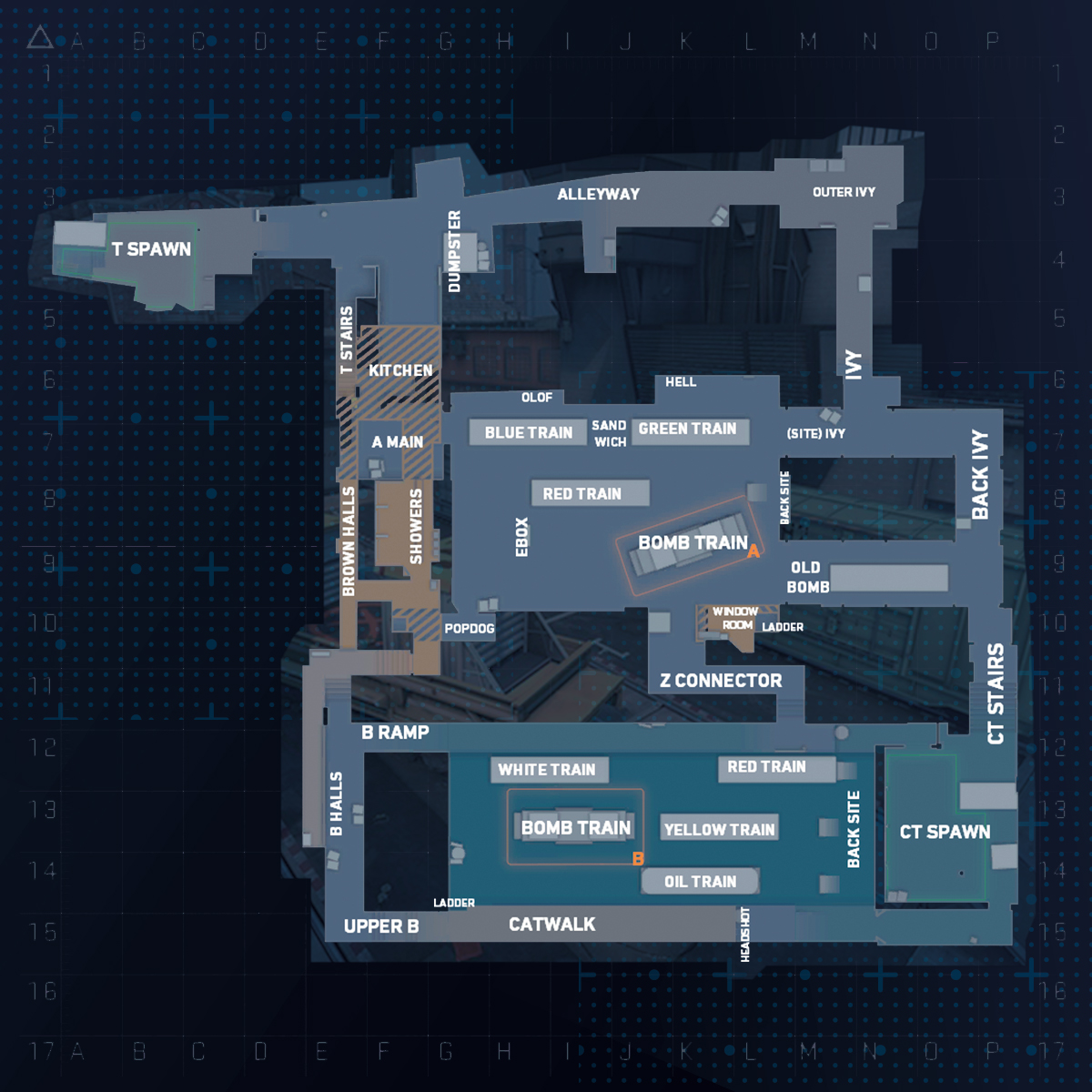 Train is another classic map, with a near-equal amount of history in the game franchise as Dust2. The map is considerably different from its original form, none more obvious than one of the trains being known as “old bomb.” Due to its location in a train yard, the amount of trains in the map mean most are referred to by their colour or purpose.

The position “Olof” on the map is named after Olof "olofmeister" Kajbjer. This was mostly due to the fact the Swedish player regularly used this position to great effect, with a clear angle towards Ivy. It tends to be a difficult position to clear out, due to it being in a corner and nestled behind the Blue train. 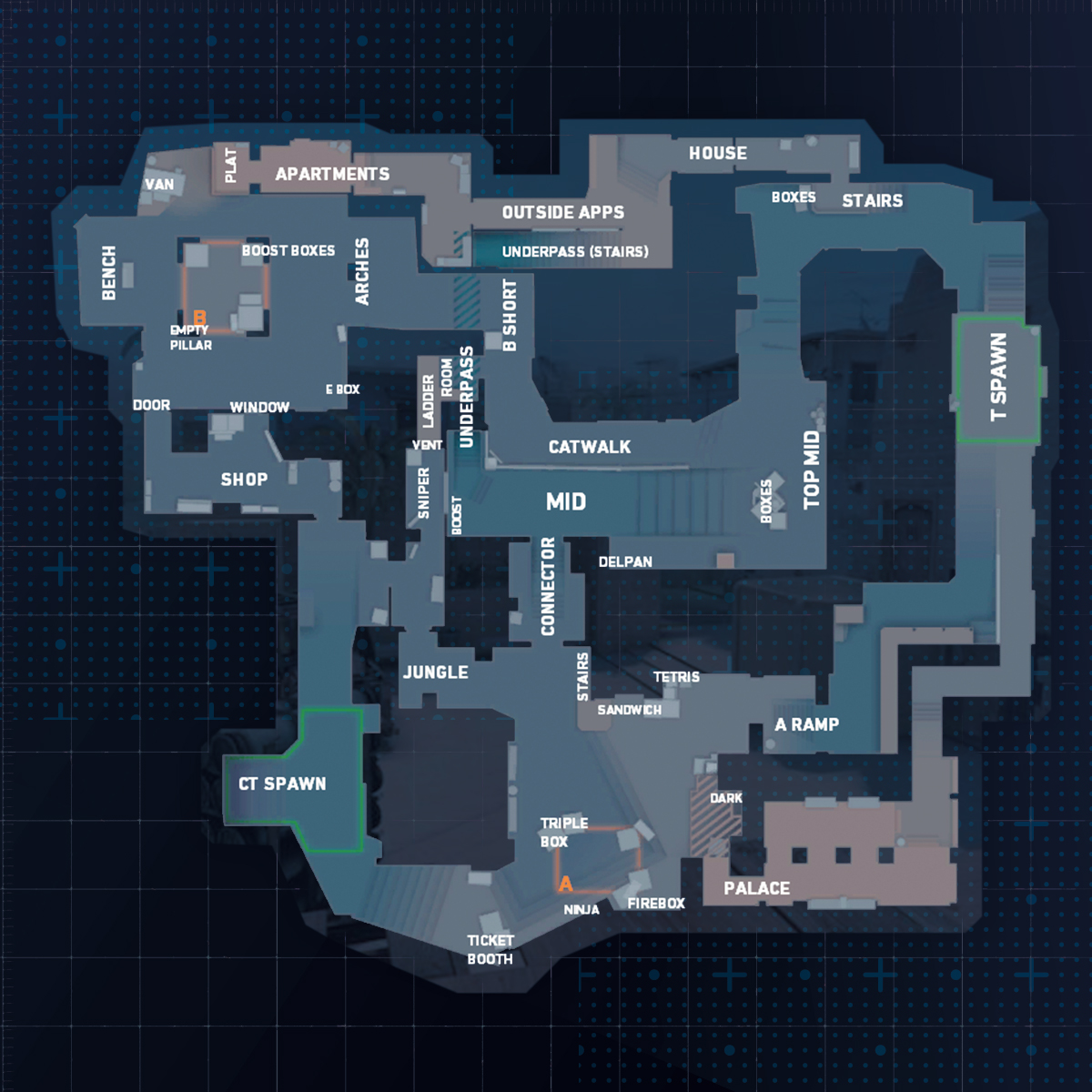 Mirage is the only map which has been constantly active in the map pool since CS:GO began. As such, it has had no major changes and looks near identical to how it did since 2012. The layout is structured similarly to Dust2, with T-side access to the bombsites dictated by two main routes. A lot of times, the map is dictated by control of the mid area.

On mid, there’s a position about halfway up on the left known as “Delpan” from where you’re able to peak Short and Window with a substantial bit of cover. Named after Marcus "Delpan" Larsson, and alternatively known as Chair, it was named as such due to the Swedish player’s affinity for positioning himself there when the early days of the map’s introduction back in v1.6. 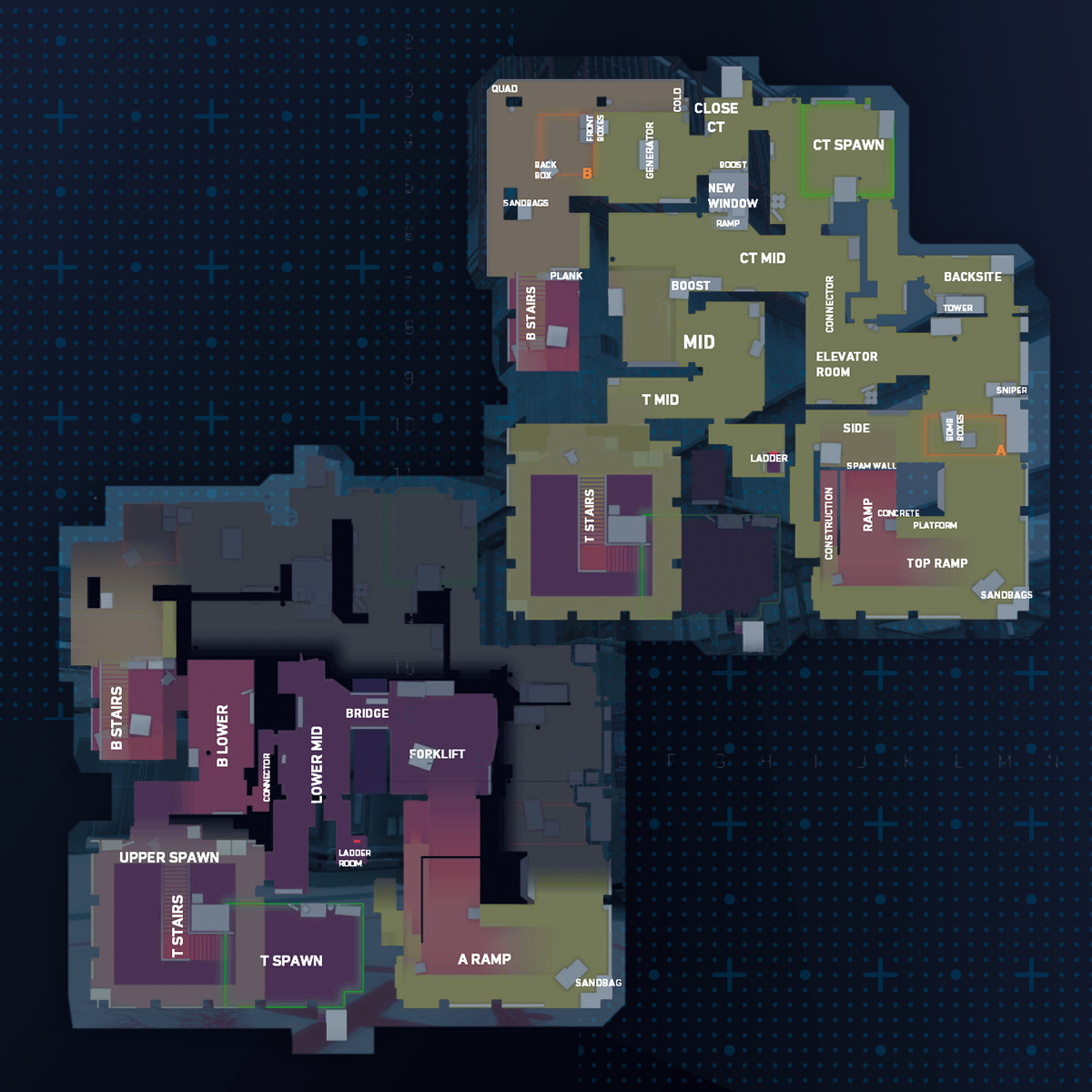 Vertigo is the newest map in the map pool, and the most radically different due to its verticality. While it can be compared to Nuke in having two levels, it lacks the traditional parts most other CS:GO maps have. The majority of the movement happens underground, and bombsites only really have one main route of access each.

The area on the B-bombsite named “Cold” is named after Marcelo "coldzera" David. Unlike the others, it’s not named after him thanks to his good performance there. From there, there is a jump you can do to close CT, andin a show match coldzera famously failed to make that jump. The first time any player had fallen at that position in any notable LAN event. 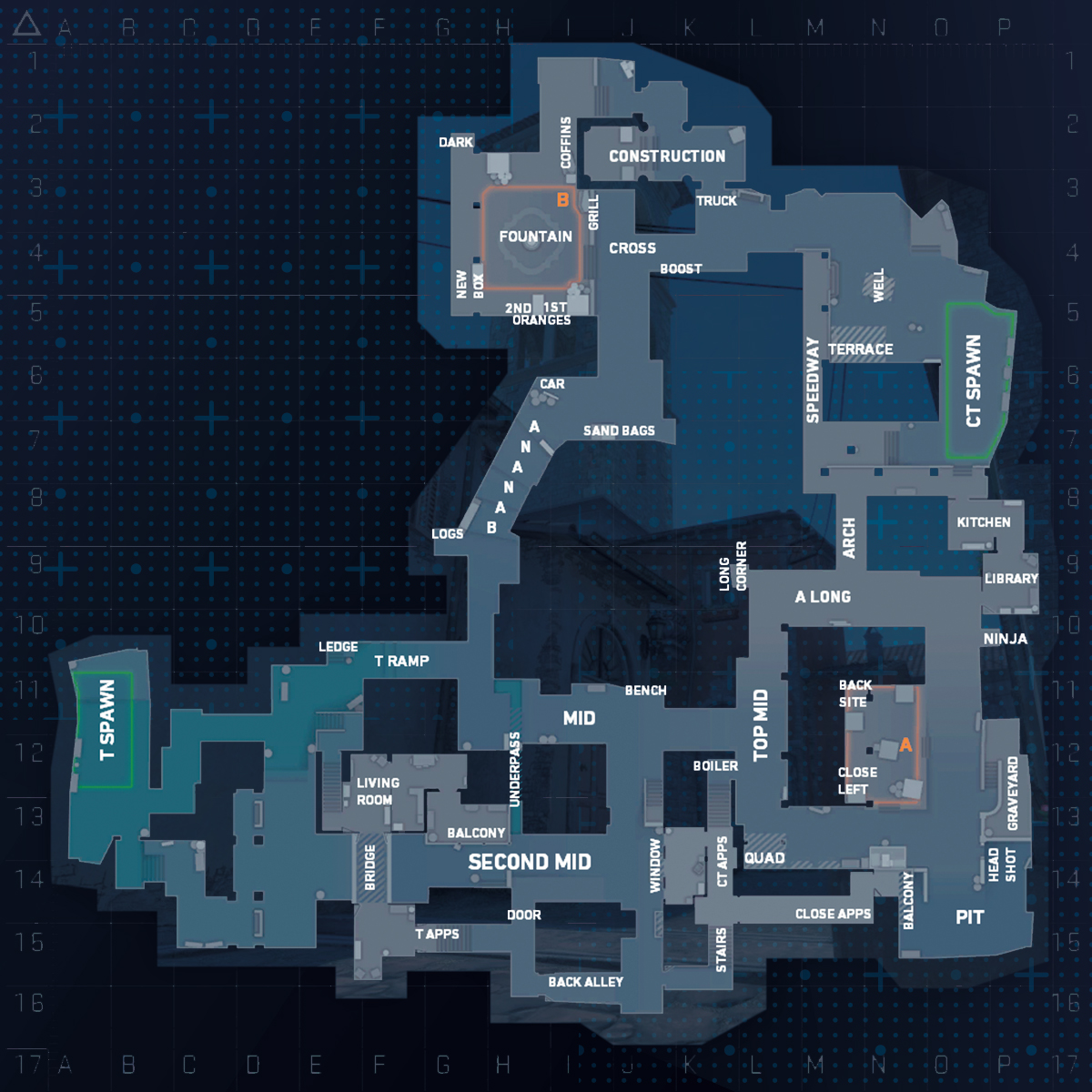 Inferno is another classic in the map pool, which has become known for always producing close and exciting matchups in tournaments in recent years. The map features two “mid” areas, from which each offer different access ways to the A-bomb site. The map is probably most well-known for its route to B, with the iconic Banana area being known for a number of close matchups and new and innovative tactical displays.