Playing on the Counter Terrorist team has always appeared to be advantageous in CS:GO. After a set of updates by CS:GO developer Valve throughout 2017 however, this looks set to change with the balance of power shifting. While many thought that the shift toward equilibrium was a trend, the statistics from the start of this year look like it might have headed back the other way.

In Counter-Strike: Global Offensive (CS:GO) teams play one half (15 rounds) as a terrorist (T) and one half as Counter-Terrorist (CT). If you’re on the T-side, you’re the attacking side. Your objectives are to plant the bomb on one of two bombsites and defend it. If you’re the CT-side, you’re on the defence with the objective of protecting the bombsite. Failing that, the CT-side can still win by defusing a planted bomb. Both teams can win a round through eliminating the opposing team.

Being able to accurately assess the probability of a comeback occurring is essential when trying to find an edge. This may not be as simple as you may think, with a number of factors affecting such an opportunity. There are constant changes coming to CS:GO which affect the gameplay, alongside the inherent biases towards certain sides in each map. However, finding the data and looking for any potential patterns can be simpler than most would think.

During the start of 2019, the momentum that saw the game balance out between the CT and T-sides was halted. What was once a closing gap was substantially widened as the CT-side has been so far, on LAN, up over 2% to what the gap was last year. The trend from the past years has seen the balance of the two sides smoothly come towards the centre, between 0.1% - 0.5% a year, but this year has so far been substantially different. 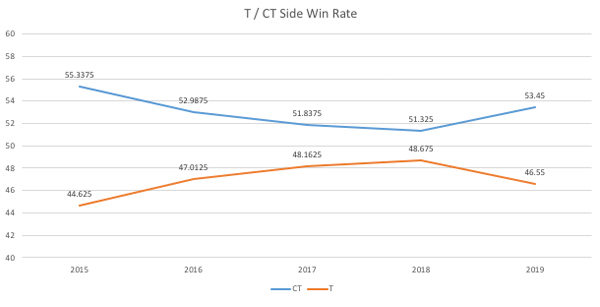 The reasoning behind this is that a number of changes have occurred to the game. These changes can easily be boiled down to three categories: Gameplay, Weapons, and Maps. Each of these three key parts are important, and changes to these impact the game in a different way.

The impact of guns in CS:GO

We begin in the weapons department, and in that we start with the AUG. Before recent changes to its cost were introduced by Valve, the weapon was seen as unviable. This came down to its history as an ineffective weapon, and changes to the gun’s attributes went unnoticed by the professional and semi-professional players as they decided to stick with the M4 range of weapons.

This eventually changed when on 9 October 2018, Valve introduced an update that slashed the price of the AUG by $150. Whilst this sounds like a minor change, that adjustment meant that the cost was only $50 more than that of the M4A4 and M4A1-S, and allowed players to able to pick up the weapon and invest in extra utility.

Whilst players were initially wary of using the newly cheapened gun for quite some time, by 2019, the AUG became a compulsory buy for the CT-side. This has been one of the driving reasons for seeing an increase in CT-side wins in 2019.

What was once a closing gap was substantially widened as the CT-side has been so far up over 2% to what the gap was last year.

The AUG is effectively the superior gun to the M4-range. In short distances, the AUG’s higher armour penetration means you need to fire less bullets into your opponent to kill them, and against an enemy with a helmet, a headshot is a kill. At long range, the scope and large magazine makes it a powerful weapon to hold angles against an oncoming attack.

Valve have since reverted the cost for the AUG back to its original price tag of $3300, but with the competitive players getting a taste for the gun, a number would most likely stick to the weapon now as they have seen the benefits over the alternatives. In the same update, Valve improved the often forgotten M4A1-S, seeing the silenced weapon able to hold more bullets (25 in a magazine from 20) than previously.

How do patches effect gameplay?

A few years had passed with notable changes to the game, save for the exception of round time and the length of the C4 timer, and then Valve introduced a fairly drastic change to the game in March of 2019. This change involved amendments to the loss bonus counter. Where previously it would reset upon a round win, the loss bonus money would decrease by one level instead. This, according to Valve, was aimed at “reducing a negative feedback loop following streaks of losses.”

Whilst this does affect teams on both sides, this particular change to the economy gave a small helping hand to the CT-side. This is because the weaponry and utility on the CT side costs more than the T side. For example, the M4A4 and the AK-47 are comparable weapons. Of the two, the M4A4 is $350 more expensive than the AK-47.

Additionally, the Incendiary Grenade on the CT-side costs $200 more than the T-side’s Molotov, and then there’s the $400 Defuse kit with which there is no direct comparison on the T-side. Before, the CT-side would need to either win a number of successive rounds without suffering economic damage, or eco more rounds to return to a full buy situation.

This was the second time Valve altered the economy in CS:GO. In October 2018, Valve added a change that meant the losing team of a pistol round would move straight to the second tier of the loss bonus. For a CT-side, this extra $500 proved vital. No longer did a team need to wait until the fourth round of a match for a full buy - they could just buy up on the third round, or take a force buy in the second round for an early comeback.

A further change came on 14 May 2019. The new loss bonus system was changed to have the loss bonus counter cap after it hits the maximum loss bonus, and reduce by one each time a team secures a win. Previously, it was able to increment continuously which could’ve potentially seen a peculiar situation where two teams sit on maximum loss bonus for a number of rounds.

This is the one change that, in my opinion, has had the least effect on the balance of a CS:GO match was Cache being replaced by Vertigo. When you compare the introduction of Vertigo to the entirety of 2018, it would appear to account for the small increase in CT-round wins. However, when you compare the win rate on Cache from 2018 to the start of 2019, you can see that the 48.2% CT win rate rises up to 50.7%. Similar statistical changes can be seen in other maps like Mirage. This is likely due to the above two changes, from the weaponry to the economic changes in the gameplay. 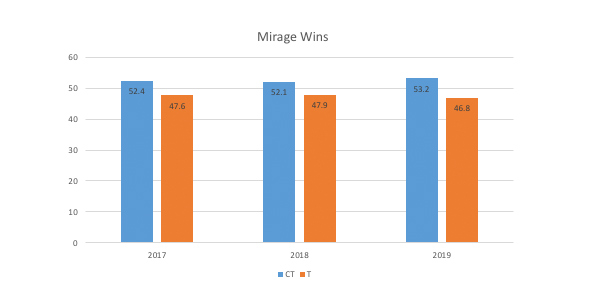 Valve are well known for making a number of changes to CS:GO without much forewarning, which is known to cause surprise amongst the players and teams. CS:GO isn’t static, and receives  constant updates evolving the game and providing opportunities to change the meta. The basics will more than likely remain the same, which will leave only advanced game mechanics as something to be updated.

Valve are continuously looking to improve and make alterations to CS:GO, and whilst every update isn’t seen as necessary by teams and players, it allows for players to create new strategies that can benefit from these updates. It would be beneficial to keep an eye on the CS:GO developer website, and what changes the community, teams and players reacts to in order to know who will be on top by the end of the year.