Playing on the counter-terrorist side in CS:GO has always been seen as an advantage. Multiple updates have changed CS:GO extensively, leading many to believe CS:GO is becoming more terrorist sided. Is this actually the case? Why is it important for bettors to analyse the T side bias in CS:GO? Read on to find out.

In Counter-Strike: Global Offensive (CS:GO) teams play one half (15 rounds) as a terrorist (T) and one half as a counter-terrorist (CT). Players must eliminate the enemy, plant the bomb (T side objective) or defuse the bomb (CT side objective) in order to win a round. The first side to reach 16 rounds wins.

In live CS:GO betting, being able to accurately assess the probability of a comeback occurring is essential when trying to find an edge. With drastic changes altering CS:GO, quantifying this has become more difficult. Presuming rumours to be accurate without analysing the data is a common mistake bettors make. However, sourcing data and looking for any potential patterns is a lot easier than many people think.

By comparing the average amount of round wins on the T side throughout the CS:GO map pool during 2012 – 2018, we should be able to see if the rumoured phenomenon occurs. The data for three maps (Cobblestone, Overpass and Cache) begins after the others as they were added later. Plotted below are the results: 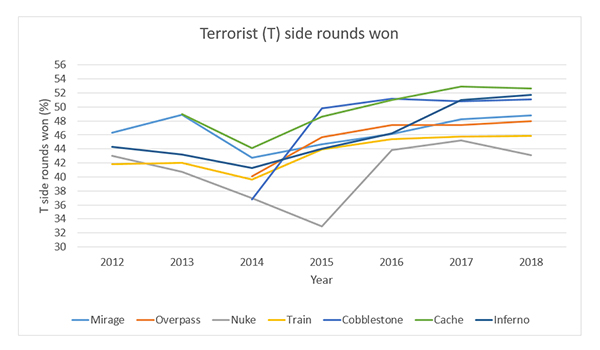 Data for Dust2 was removed as it was only added back into the map pool in April 2018 – the T side always averaged around 50% of rounds won during the time it was played. From glancing quickly at the graph, it appears to show a steady increase of rounds won by the T side throughout most of the maps.

Practising the T side has become a priority for most teams due to its perceived level of difficulty and importance being higher than that of the CT side.

Four of the seven maps remain CT biased, with Cache being the only map to have a small decrease in T rounds won. This is attributed to its decrease in popularity at a professional level – it was the most played map in 2015 but the fifth in 2018.

Establishing there is an increase in the rounds won by the attacking team is part of the analysis and we must analyse why this happened. Only when you understand why this increase happened can you spot similar traits in the future when they occur. This ensures bettors can react quickly and potentially get an edge over the bookmaker.

How have game updates made CS:GO more T sided?

Despite Valve neglecting CS:GO for extended periods, significant updates have played a role in altering the game. Having up-to-date information on all gameplay changes is essential to be successful at betting. Following the correct CS:GO Twitter accounts is one of the best places to find accurate data that can be the difference between winning and losing a bet.

On December 8, 2015, Valve released an update for CS:GO that altered the round length from 1:45 to 1:55. It might seem small, but this ten-second increase had a massive impact. For example, on Inferno, it stopped the CT side blocking off choke points for a significant period of a round.

The round length increase enabled the T side to wait for the utility to expire before attacking a bombsite, increasing the chances of success. It’s no surprise that between 2015 and 2016 we saw an increase of 2.2% in T side rounds won on Inferno.

How map updates altered the balance of CS:GO?

An essential factor to consider when betting on CS:GO is the maps. Using statistical data from past versions in your assessments is a mistake due to the significant changes made to the map pool. Some updates require weeks of matches before their effects become apparent, so keeping an eye on maps over a period is essential.

An update for Inferno released in October 2016 changed the design and gameplay. One of the significant changes was the removal of the skybox near the B bombsite part of the map.

The open skybox in previous versions allowed CT players to throw smoke grenades from the other side of the map to the bottom of Banana. Using three smoke grenades, coupled with incendiary grenades would block off the attacking team for over a minute.

Blocking the skybox denied the CT side from taking advantage of this, enabling the T side to gain map control quicker and easier, increasing the number of T rounds won. Attacking teams won 45.4% of T side rounds before the update, which rose to 51.8 in the six months after, a clear indication of how significant this change was.

How does weaponry changes impact CS:GO?

When betting on CS:GO, an essential element is understanding the equipment and weaponry a team has and how it can influence the result of a match. Superior equipment presents teams with an advantage, increasing the probability of success in a round. Changes to the accuracy, the rate of fire and magazine capacity (amongst other things) of weaponry will alter a team’s chances of success.

The round length increase enabled the T side to wait for the utility to expire before attacking a bombsite, increasing the chances of success.

On the CT side, there are two main rifles a player can pick from – the M4A1-s and the M4A4. An update in September 2015 focused on nerfing the M4A1-s - a silenced gun that has lower recoil but less ammo.

The update reduced the rate of fire of the M4A1-s, weakening it in close quarter fights against the T side AK-47’s. Criticism by professional players was fierce, with olofmeister (from FaZe) stating on his Twitch stream he had no idea how to use the M4A4 and wanted the update reversed.

To analyse the impact of this update further, we can analyse the round wins for the T side in the months before and after the update was released to look for patterns forming. Plotted below is a graph demonstrating the results: 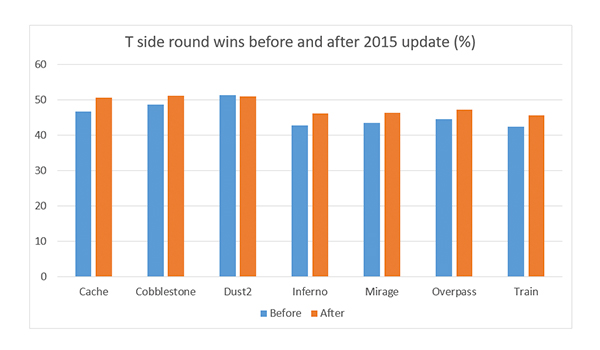 From looking at the graph, it's apparent how significant an impact this nerf had. Cache saw an increase in T side round wins of 4%; Inferno’s was 3.3, Mirage 2.9, Overpass 2.8, Cobblestone 2.5 and Train 3.3. Dust2 had a slight decrease, but the map is famous for being balanced.

A factor overlooked by bettors and fans alike is the length of time CS:GO has been out. Six years is ample time to learn the ins and outs of the game, master the basics and develop an understanding of subtle aspects that can bring a players game to the next level.

Practising the T side has become a priority for most teams due to its perceived level of difficulty and importance being higher than that of the CT side. A solid T half can give a team a mental edge going into the later stages of a match. More time allocated to this part of the game increases the amount of T sides won.

CS:GO isn’t static, Valve is famous for making big and bold decisions. The direction of the game can shift on a whim. Being up-to-date on the current meta and analysing yourself how updates are altering the game is one of the best ways to stay ahead of the curve and make informed decisions about your CS:GO bets.

Maybe say that updates like his might happen again soon? If you can be aware of that there is potential to take advantage.

Want to learn more about betting on eSports or upcoming events? Go back to our eSports betting hub.