Get in touch
Before ESL One New York 2019, ESL announced their CS:GO tournament plan for 2020. This mostly encompasses the ambitious project of the ESL Pro Tour, where ESL and DreamHack interconnect their tournaments at various levels.

What is the ESL Pro Tour?

The ESL Pro Tour is the new name for ESL and DreamHack’s tournament circuit. It combines all of the two tournament organisers’ events into one calendar, seeing at least 20 events over a year contribute to the tiered system with over $5,000,000 in prize money on offer.

Each tournament sits in either the Masters or Challenger tier, with each tier offering a different amount of points to where teams place. Those points go into the Pro Tour ranking over the year, where the top 16 rated teams head to the Masters Championships. While points are valid for an entire year, they’re only worth 100% until the closest Masters Championship, where after they’re worth 50% to the following one.

What is the ESL Pro Tour structure?

At the bottom of the ESL Pro Tour system are the ESL National Championships. These tournaments offer no ranking points, instead potentially offering spots to either the ESEA MDL league or a relevant DreamHack Open competition.

The structure operates in two routes, the Pro League route and the Open Circuit route. Each operates slightly differently in terms of timescale and tournament access. 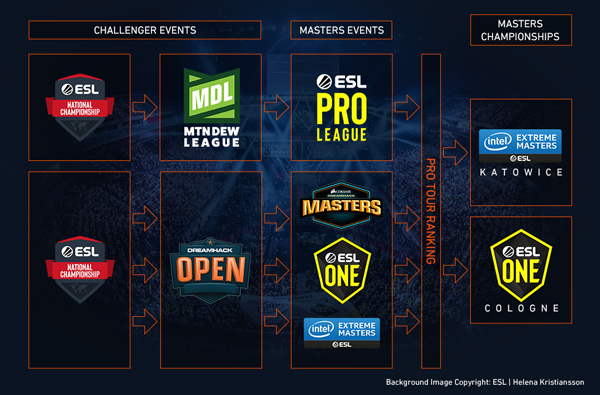 The Pro League route will continue to operate as-is: closed-off, with teams moving up and down through the promotion and relegation systems between the National Championships, the ESEA league system and the ESL Pro League throughout seasons. MDL and Pro League offer points towards the rankings depending on where the teams finish and in the respective point tiers.

The Open Circuit route is, as the name suggests, the more open option. With DreamHack Open tournaments sat at the bottom of the ladder, qualification into them will occur as normal, with invites and regional qualifiers. Points for DreamHack Open will remain static, ranging from 100 for the winners to 20 for those that finish in 5th-6th.

Access to the Masters-level tournaments will be split between invites based on the ESL Pro Tour world ranking or wildcards, winners of a recent DreamHack Open event and qualifiers from various international regions. Points for Masters tournaments depend on how many teams take part, with 1000 points on offer for the champions of a 16-team event, and 800 on offer for just 8-team events.

The Masters Championships are the twice-yearly landmark tournaments of the ESL Pro Tour. These take the form of ESL’s two most popular events, IEM Katowice and ESL One Cologne. Each Masters Championship will feature 16 teams, with the top eight ESL Pro Tour ranked teams receiving direct invites to the tournament, while the remaining eight teams are determined by qualifiers.

The qualifiers will be another 16-team tournament, with eight of the teams directly selected those from 9-16th in the rankings. The other eight teams will be wildcards, selected based on the world ranking, the region of origin, and two from the Challenger circuit.

The first ESL Pro Tour Masters Championship will be IEM Katowice 2020, where $500,000 will be on offer. The winners of DreamHack Masters Malmo, IEM Beijing and ESL Pro League Season 10 will qualify directly to IEM Katowice 2020.

From ESL One Cologne 2020, all Masters Championships will offer $1,000,000 in prize money alongside the highest points on offer from the ESL Pro Tour, with 1800 points for the winner.

What about the Majors?

With the Majors already present in the CS:GO circuit, they exist outside of the structure of the ESL Pro Tour. However, results at the Major will count towards the ESL Pro Tour rankings, rated at the Masters Championship points level.

Full information on the ESL Pro Tour can be found on their website, with full point details and a list of upcoming tournaments, and you can bet on ESL Pro Tour events here on Pinnacle. The next ESL Pro Tour event will be IEM Beijing, set to take place November 7-10.