BET on ROCKET LEAGUE WITH PINNACLE

What are the RLCS changes?

Previously, the RLCS was a league system for the four regions that featured a World Championship event twice a year. In total, throughout the different leagues and the finals itself, over $1,000,000 of prizes were given out per season.

There are two big changes in the upcoming RLCS season, dubbed RLCS X. The first, is that there will no longer be two seasons ever year. Instead, there will be one season that lasts the length of a year, sectioned off into three “splits”. 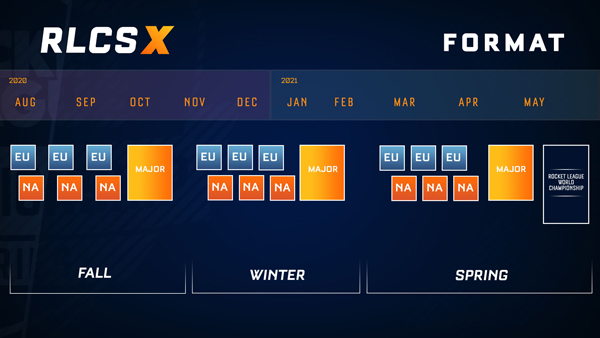 The second big change is that the league format has been completely abolished. Instead, for North America and Europe, each split will feature a circuit of events. In total, there will be three events per region, which all lead up to an international Major at the end of the split. In total, this will mean that each season will see 18 regional events and three Majors and one World Championship.

Each split of the season will feature different formats, with the upcoming Fall Split featuring tournaments of 32 teams, Winter holding 24 teams and the Spring Split will feature 20 team tournament formats. For Fall, these tournaments will all be online, with the 32 competing teams being split into two 16 team Swiss groups. The top eight teams from both of those Swiss groups will head to another 16 team Swiss group, before the top eight move to a single elimination bracket to determine a winner.

Teams earn points for every tournament they appear in, with these points going towards qualification for each Major as well as the end of season World Championship. In total, 16 teams will be invited to the World Championship, up from the previous total of 12. The distribution will see six teams come from each of North America and Europe, the game’s two strongest regions, and two from each of Oceania and South America.

Currently, the circuits for Oceania and South America are yet to be announced. The developer Psyonix have stated that they intend to work with local tournament organisers in the regions in order to launch their own, unique circuits for World Championship qualification.

Prize pools for each event will also be raised across the board. Each regional event will have $100,000 on offer, $250,000 will be handed out at each seasonal Major, and $1,000,000 will be on the line at the World Championship. In total, Psyonix have announced that across all regions more than $4,500,000 of prizes will be offered out by the end of the season.

What happens to the current RLCS and RLRS teams?

With the league format completely dissolved, the ten RLCS teams and six RLRS rosters that had expected a tournament to compete in suddenly lacked their previous format. However, their progress and the places they had earned were not in vain, as they have been rewarded with earlier entry into the upcoming regional events.

For the teams that would have competed in the next RLCS season, they have received a guaranteed automatic invite to every regional event in the Fall Split. For the teams that were expected to compete in the RLRS, they will all be automatically seeded into the third day of each open qualifier, giving them a stronger chance of reaching each event.

Also, the 16 teams that were expected to compete in the next RLCS and RLRS seasons will be invited to a new tournament circuit. Named “The Grid”, it will be a 16-team online competition that will offer $10,000 in prizes for every week of the split. At the end of the split, 10 of the 16 teams will retain their places in The Grid, with the final six slots going to a re-qualification system.

The Grid will be used to help determine seeding for each of the regional events, as well as providing the highest finishing team a guaranteed place at the end of split Major. The Grid, however, won’t be used to determine teams that will compete at the World Championship, meaning placements at the regional events and Majors will still be important.

When will RLCS X begin?

RLCS X will start with the Fall Split, which officially commences with Europe’s first regional event on 1st August, with North America following on 15th August. Qualifiers for the events will start before then, with registration for the open qualifiers of both regions closing on 24th July.

The Fall Split is set to culminate with the Fall Major, currently scheduled for the end of October. More information on RLCS X and the new format can be found on Psyonix’s website.