ESL is back in New York once again, returning to the Barclays Arena where ESL One New York 2017 was held. Continuing the trend from last year, six teams have been invited back and two teams have earned their spot through qualifiers.

Liquid are the current favourites in the ESL One: New York 2018 odds with Na’Vi and FaZe close behind. Below is a list of the outright odds for the tournament:

Learn more about each of the favourites

As seen in the odds listed above, the favourites are priced closely. As the strong majority of these teams have performed at the FACEIT Major, it would be beneficial to take a look at our recap of the FACEIT Major to help inform your betting for this event.

Team Liquid (priced at 3.28* to win ESL One: New York)have proven that if you invest in your players, then they will perform. They’ve proved to be top contenders with their recent successes at ELEAGUE and at the FACEIT Major, going as far as to destroy the group stages and not drop a single map. Their only obstacle as of their last four events has been Astralis who have defeated them four times in a row.

Na'Vi is another team that bettors can get behind (odds of 3.91* to win the event show how popular they are). It’s been a successful year for Na’Vi, prior to the Major, they were on a war path, winning ESL One: Cologne 2018, CS:GO Asia and StarSeries. Their list of perks doesn’t stop there, in the last three months they have had successful matches on Train (88%), Mirage (80%) and Overpass (72%) which are considered some of the most played CS:GO maps in the pool currently.

FaZe have proven in the past that they have what it takes to win major competitions - they did so convincingly at IEM Sydney, where they ran away with the majority of the maps played, winning 13 out of the 17 played where they had a 100% win rate on Cache, Dust2 and Overpass. FaZe are priced at 4.89* to win ESL One: New York and should be ready for what every other team currently has on offer.

mousesports (8.30*) are strong outsiders in this competition. They have experienced their fair shares of ups and down, winning V4 Future Sports Festival in March, but as of the last three months, they seem to be more so down. They are currently below 50% in the overall W/L ratio, chrisJ and Snax have also reached sub 1 K/D as well. mouse will be interesting to watch to see if they can pull themselves out of the rut they’ve been in.

Analysing others in the ESL One: New York odds

It’s difficult to gauge how G2 (8.80*) would have done in previous competitions as they've been in pretty difficult groups against teams such as FaZe, MIBR and Astralis in the past. Last year was G2’s year, with various competitive wins, but this year, they’ve had some roaster changes, SmithZz, Ex6TenZ and NiaK has joined as the coach.

Fnatic (10.76*) is another team where this competition could go either way. Recent months haven’t been kind to Fnatic, losing to Na’Vi, FaZe and mouse all recently and without much bounce back either. Looking deeper into 2018 as a whole, we can also see that Fnatic have reached a 0.99K/D ratio. All of this on top of the recent departure of flusha would suggest that Fnatic are in deep water.

NRG much like Liquid, are all about growing their players. NRG had recent success at Intel Extreme Master XIII – Shanghai, defeating Tyloo. They are a big outsider at 20.54* but they have been fairly successful this year alone, they’ve done the Pro Leagues, StarSeries and came 3rd / 4th at the Championship series. Looking into their stats, we can see that out of the 161 maps played, they’ve won 110 and lost 51 which is impressive for any team on any skill level.

The biggest outsiders in the ESL One: New York odds are Gambit (25.42*). They haven’t had much success since Zeus and Kane left back in 2017. However, they were successful at the ROG Masters defeating TyLoo for first place. Since then, the last time they made top eight was at DreamHack Masters Marseille, finishing 3rd – 4th place.

Group A and B overview and who to watch. 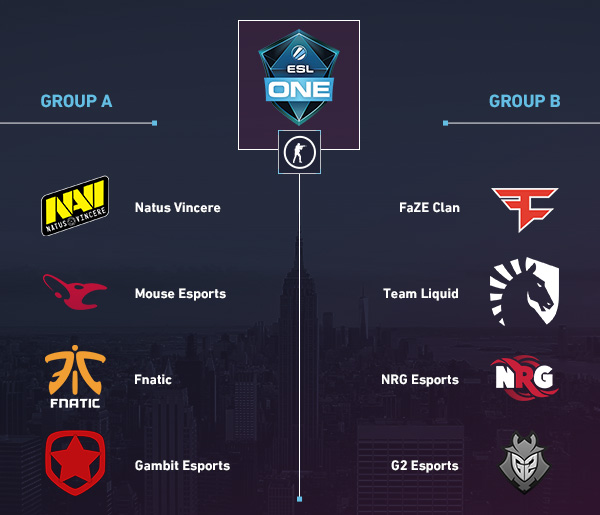 Team performance is key and at the tougher end of the spectrum, we have Liquid, Na’Vi, and Faze - all very good teams and all are capable of doing well regardless of the situation. These three teams all share a common factor: that they’ve all lost to Astralis during the final stages of the Major. The good news for these teams though is that Astralis isn't in New York. The bad news? None of the teams have played against each other during the Bo3.

mousesports and G2 are the teams with the most to gain in terms of personal success. They have proven in the past they can be successful and they can play CS well. However, they haven’t proved to be as consistent as the top three. Not to say they can’t do well, but they need to not let match loses put them on tilt.

Fnatic are going to be the biggest outsiders to watch and have shown us in the past that they can dominate. In the last six months, they beat Liquid and FaZe at Katowice 2018 but that was before the departure of Golden and Lekr0. Fnatic does have a difficult group, Na'Vi is going to be their biggest competitor but the most interesting match to watch will be between Fnatic and mouse.

NRG and Gambit are two teams that are trying to establish their selves in these groups. As mentioned previously, NRG is certainly a “build over time” team and it is apparent that both teams are trying to keep up with the bigger teams. Gambit will be using opportunities like this to put into action what they have done behind the scenes, and prove that they can put the work in and come up with legitimate tactics.