Are you starting to make your journey towards the top of VALORANT? In such a case, it’s probably best to understand the game’s ranking system, in order to figure out how where your skill level is at that moment to continue improving.

First of all, if you’re truly starting from the beginning with VALORANT, then you’ll need to grasp some more of the basics first. Check out our articles on the in-game roles you’ll take up as a player, and also how VALORANT's economy works.

What are the VALORANT Ranks

All in all, there are eight ranks in VALORANT’s competitive mode. These range from the bottom of the pile Iron all the way up to the top level of Radiant, for those players who are the best of the best. Your rank is the outward display of your Match Making Rating, or MMR, a hidden score that pools a large number of factors to more precisely state how good you are at the game.

In each rank between Iron and Immortal, there are also three sub-ranks to more precisely indicate where your skill level is compared to the remainder of the player base. Radiant, however, does not have any sub-ranks, and instead exists on its own. In total this means there are 22 levels for players to progress through.

VALORANT’s ranking system works similarly to both CS:GO and League of Legends’ ranking systems. In terms of the structure, it is more similar to LoL as you work your way up different levels of different ranks. However in number between the lowest and top ranks, and with the top rank being by itself, is more akin to CS:GO. 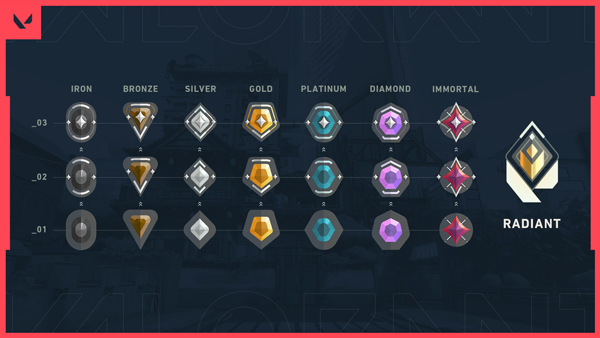 So you’ve started playing the game, and are looking to pick up your rank to compare with your friends, and potentially brag about being the highest amongst your group. However, it’s not as simple as just jumping in, playing a game and being told you’re Silver 2, for example.

Having completed the tutorials that take place once you open the game for the first time, you need to start playing some matches in VALORANT’s unranked mode, 20 in total. Doing these provides the matchmaking system some sense of your actual playing ability, so that you can jump into the ranked section without feeling like you’re one player up against five superstars.

Unlike a lot of competitive FPS games VALORANT puts a lot of focus into how decisively you win or lose games for your rank.

Plus, it allows you a chance to get to know the game slightly more. Meaning you can start with an understanding of VALORANT’s nuances and gunplay to make sure you’re not hamstrung by having played so many games without having a full understanding of the abilities characters have, or having not yet realised the weapons have spray patterns. For those of you that took part in the beta, the games you played then do count towards this 20 game quota.

Once you’ve completed your 20 unranked games, you’re given access to the game’s ranked mode. You then need to play five ranked games in order to be placed into a rank. These games will contain a mix of players without ranks, and those who have recently finished their placement matches. This will allow the system to determine if you’re better or worse than these opponents to ensure accuracy.

Your placement matches will be predominantly focused on your own personal performance, alongside if your team wins or loses the games that you play.

Playing with your rank

Now you have your rank, it’s time to play some matches of VALORANT, confident in the fact that the game has determined the skill level of yourself and of those around you whom you play with.

First up, the rules of your ranks. While slim, there is still a chance of losing some elo despite winning a game, and also gaining some even if you lose. So if you’re wallowing at the bottom of the scoreboard, hardly ever assisting your teammates during the game, you’re in danger of losing your rank.

There are eight ranks in VALORANT. These range from the bottom of the pile Iron all the way up to the top level of Radiant.

Next up, your rank is increased, or decreased, by a number of factors. Unlike a lot of competitive FPS games, and a contrast from the placement matches, VALORANT puts a lot of focus into how decisively you win or lose games. For those of you who like to brag about having a high Kill/Death/Assist ratio, you’ll find it much harder to rank up. Be an active teammate and consistently contribute to wins and you’ll soon rise to the top.

With VALORANT having a focus on being a team-game, there is no solo queue in the ranked matchmaking. This means there is a chance that if you line up as an individual player without any teammates, you’ll come up against a full five-stack. However, if this does happen, you’ll receive a bonus to your rank progress to make sure you’re not necessarily hampered by coming up against those who are experienced teammates.

Is the Operator actually OP?

What is the meta in VALORANT?

The maps in VALORANT explained