As a Tactical First-Person Shooter, VALORANT presents a variety of new maps for bettors to understand and analyse. In this article we go over the maps in VALORANT and highlight some of the key points of each map and frequently asked questions about the maps in VALORANT.

What are the VALORANT maps called?

According to Riot Games, you have a 25% chance to play each of the four maps in VALORANT.

How can you practice on VALORANT maps?

Custom games are a great way to practice on the maps in VALORANT. You can enable the ‘Cheats’ option in your game settings to adjust parameters such as ability cooldowns, ammo, round timer and more.

Split explained: A futuristic neo-Tokyo with a theme of verticality 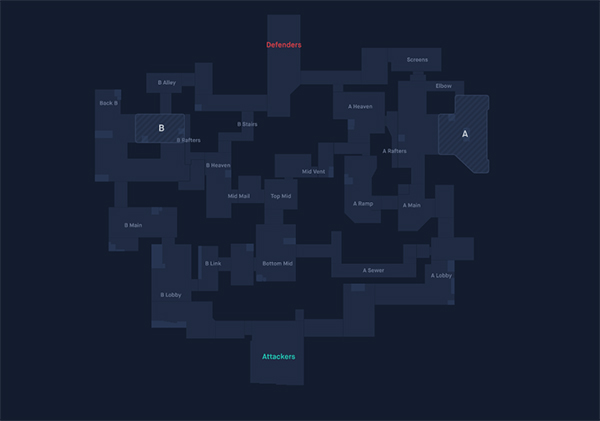 Based in a neo-Tokyo setting, Split is one of three maps initially released by Riot Games for play testing in the closed beta. Its architecture features a mix of modern and traditional Japanese design with various foot paths, ramps, stairs and ropes for players to traverse the map.

Among the things players will notice when playing Split is the verticality it features, as the map has been designed for the Defenders to have control of the high ground and the Attackers being the opposing force from the lower levels. This verticality has led to the map having a slight bias towards Defenders, as it is easier to hold narrow chokepoints with the use of agents such as Sage and Cypher.

As an Attacker, there are three key areas that are important to control on Split: A Main, B Main and Mid. A and B Main are the areas just outside of the two respective bomb sites and having control of these areas is paramount if a team wants to execute a strategy to take control of the respective bomb site it is adjacent to. These two areas are natural choke points on the map, making them areas of contention between Attackers and Defenders.

‘Mid’ or ‘Middle’ is a centralised area where paths from both teams and bomb sites converge. In voice communication, many in-game leaders (IGLs) will tell the team to take ‘Mid control’. The strategy in this scenario is simple and taking control of the middle area of Split allows for a team to have the choice to move towards the A bomb site or B bomb site quickly. The mid area is usually the most contested area of the map for both sides, making ‘Mid control’ an important aspect for teams playing on Split. 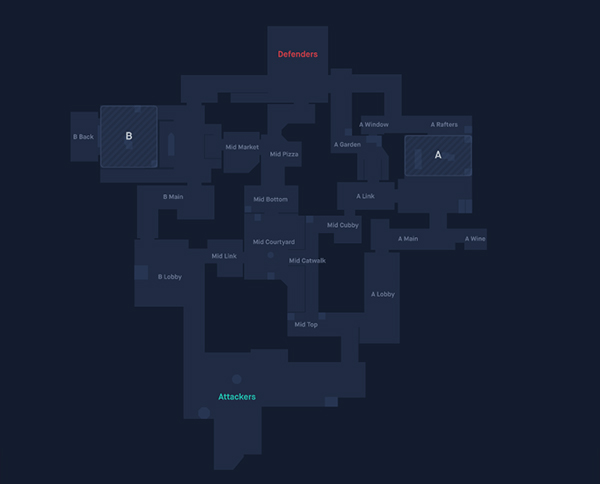 The fourth map released by Riot Games, Ascent is supposedly the first ever map developed and designed by the VALORANT team. The aesthetic for Ascent is Venetian-inspired, with the caveat that it is a floating island in the sky. Its main features revolve around its prominent mid area and the two retractable (and destructible) doors on each of its two bomb sites.

While the mid area of a map is generally important, on Ascent it can be considered the focal point for both Attackers and Defenders. The mid area almost splits the entire map in half, with both teams having sight lines that extend into each other's territory upon the start of a round. These extended sight lines make the use of sniper rifles like the ‘Operator’ and ‘Marshal’ by Defenders prevalent in the mid area, as they can act as strong ‘anchors’ that can hold control of mid from an advantageous position.

The mid area of Ascent poses a particular problem for Attackers because the usage of abilities like smoke screens are necessary to minimise the potential for a teammate being killed while entering the area to take control. Smoke screens and flashes (flash bangs or similar) are a limited resource for an attacking team and their usage while taking control of mid can influence how a team may approach the A or B bomb site later on in the round once mid control has been established.

On the other hand, Defenders are given control of two retractable doors (one on each bomb site). These retractable doors can only be activated from the inside of the bomb site and are used by Defenders to slow down or shut off possible routes the Attackers could take to enter the area.

While these doors are destructible, once closed they can act as an early warning system for any Defenders holding a bomb site, as it becomes obvious that opponents are on the other side and about to engage. These doors can also be used advantageously by Attackers to narrow down the possible routes a Defender can take without making noise to retake a bomb site that has been ceded to the opponent. This makes them a double-edged sword for either team.

Bind explained: A desert town with teleporters that allow for quick rotations 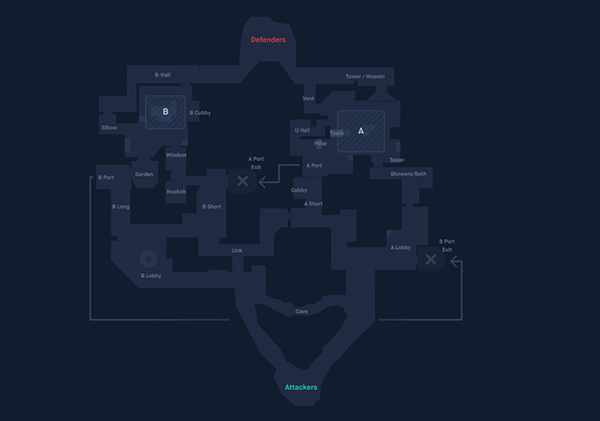 Home to the agent known as Cypher, Bind is a desert town that features two teleporters that allow teams to move quickly between the A and B bomb sites. The map also features narrow corridors and chokepoints that lead to close-quarters combat between teams, making engagements sudden and explosive.

There are two teleporters on Bind, one located on A short and the other on B Long. The teleporter on A short leads directly across to a location outside of B window, also referred to as ‘Hookah’. Strategically, the A teleporter is considered more valuable for Defenders because it gives the ability to quickly provide assistance from the A bomb site to the B bomb site, in addition to providing a natural pincer move for Defenders attempting to retake the B bomb site.

On the other hand, the B long teleporter is advantageous to the Attackers as it provides an alternative option for the attacking team if they find that taking the B bomb site from B long is too difficult. This teleporter leads to A lobby which is the area just outside of ‘Showers / Toilet / Bathroom’ and quick-witted attackers can quickly clear the area and have direct access to the A bomb site for a potential bomb plant.

Due to the design of the map, Defenders will definitely have an advantage, especially when utilising Sentinel agents like Sage and Cypher to lockdown key chokepoints such as A short and B window. Attackers will definitely want to have agents with smoke screens such as Brimstone, Omen and Viper to give the team an easier time in accessing either of the bomb sites. 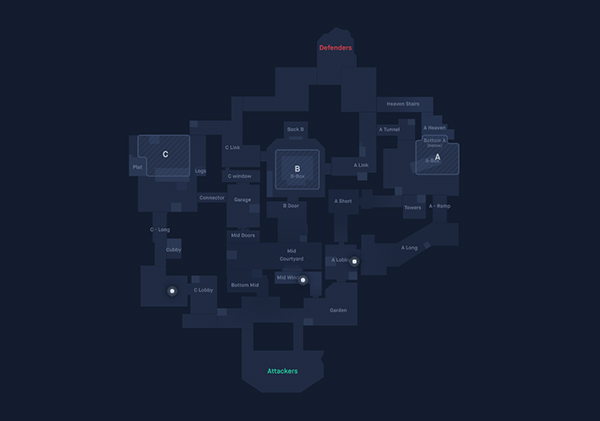 The only map in VALORANT to feature three bomb sites, Haven is an oriental townscape seemingly devastated by a mysterious object that lies in the Defender-side spawn. Having three bomb sites creates a unique situation for Attackers, as strategies that involve ‘faking’ a bomb site execution become a viable and valuable way to play on Haven.

Out of the four maps currently playable, Haven is considered the most balanced map in the game with an Attacker / Defender win rate percentage of close to 50%. The balance is largely the result of how diverse the strategies have become on the map, with each bomb site having three or more routes available to a player to enter it. This poses both advantages and disadvantages to either side and creates an environment where adaptability becomes an essential skill to have when playing on Haven.

The strongest agents to play on Haven tend to be those with manoeuvrability or crowd control such as Jett and Sage. For instance, Jett can utilise a number of elevated positions on the map to create acute angles to take engagements with opponents, whereas Sage’s abilities can be leveraged to be an anchor on a bomb site (typically the B bomb site) that creates time for teammates to move around the map.

A guide to the roles in VALORANT