Dota Underlords is Valve’s official version of the Dota 2 mod Auto-Chess. The ‘Autobattler’ genre has exploded in recent months to become a new genre, as Riot have also released their own version of the autobattler mod. Plus, the original creators of the Auto-Chess mod, Drodo Studio, are releasing a stand-alone version on the EPIC store. But just what is an autobattler?

Think of autobattlers as a mix between tower defence and trading card games within the context of a MOBA. Players create their squad of up to 10 heroes before they are sent off into the arena to automatically fight against lineups formed by other players.

What is Dota Underlords?

Unlike Dota 2, Underlords is not a MOBA, however like its Dota 2 counterpart, it's free to play. The Autobattler genre is considered to be a strategic based game that is played on a board.

You can assume that the battles are fully automated, and you would be correct in that assumption, as the only player interaction comes in the form of moving the Heroes around the board. Once the timer expires, you battle against a random opponent.

Each round starts at the shop, where you buy (or sell) Heroes using gold that you earn in each round. A majority of the Heroes from Dota 2 are available in Underlords so you will have plenty to choose from. After you've bought a hero, you can place them on the board to be played in the next round.

Whilst it might sound like a simple game of 'Drag-and-Click', it's far from that. The key question when planning strategy is "How do I play Dota Underlords?"

How to play Dota Underlords

The Dota Underlords play area is split into three main areas, the board, bench and Hero shop. Your bench can hold up to nine Heroes, which will come in handy when trying to level your Heroes to max. The board is the area where you will have your active Heroes which will participate in fights and contribute to alliance bonuses, and the Hero shop is where you will be able to purchase reinforcements. 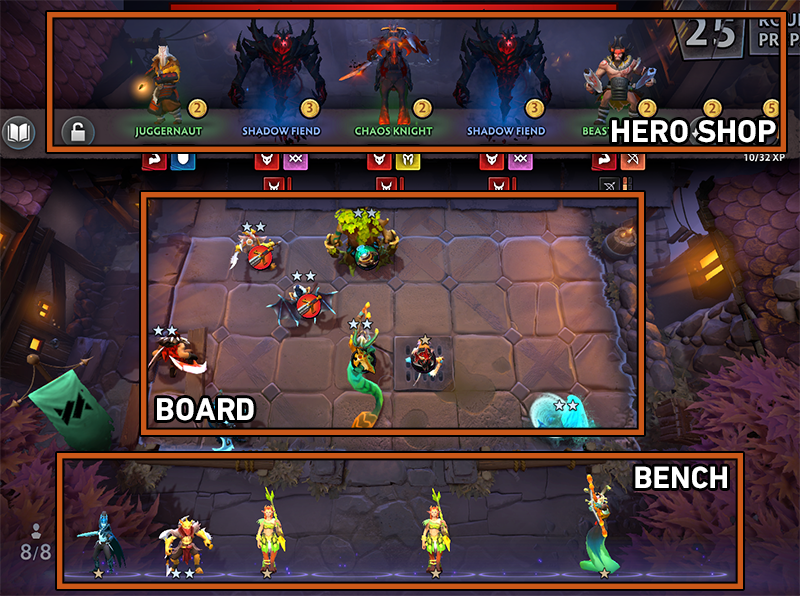 Dota Underlords is played in rounds and the rounds are split into three phases: Preparation, combat, and waiting. The preparation phase sees all players receive different amounts of gold depending on their performance in the previous round. With this gold, players can purchase new Heroes to add to their lineup from a selection of five. The selection can also be locked so that they do not change at the beginning of next round.

Players are also able to purchase experience or reroll their Hero options. These Heroes can also be levelled up during this phase by purchasing multiple of the same Heroes. Level One Heroes require of the Hero, Level Two requires three of a kind and a max level requires nine of the same Hero.

The preparation phase also allows you to move your Heroes around on the board, putting your tanks on the front line with assassins in the back. You can also use your preparation time change up your composition, which we’ll cover later in the article.

By the time the combat phase begins, the players work is done and your decisions will be locked in. You will not be able to interact or level up your Heroes once combat has begun. Your active Heroes will fight against another players’ team until a victor emerges. After the combat finishes, the loser receives damage equal to the total level of all the victor’s Heroes plus a base amount of damage based on the number of rounds that have been played.

The phases then repeat as rounds pass, until all but one player has lost all 100 of their life points.

How to use Composition and Alliances

Your composition is ultimately what will win you a game of Dota Underlords. Each Hero is assigned at least two alliances, with some even having three. These alliances become active when the Heroes are assigned to a space on the playing board and depending on their alliance, they will provide different buffs.

These combinations are paramount to your success in game and you should experiment with different compositions in-game as well as using the in-game encyclopaedia.

Items are another feature within Dota Underlords that you will need to utilise properly if you are looking to have any success in PVP. Items are dropped after every creep round which happen in Rounds one, two, and three plus every ten rounds after that.

The preparation phase also allows you to move your Heroes around on the board, you can also use your preparation time change up your composition.

All items are based off of a Dota 2 equivalent with many items having the same effect as in the traditional MOBA, which makes it a lot easier for Dota players to transition. However, there are a few exceptions. For example, in Dota 2, the Void Stone item increases your mana regeneration by 1.75. However in Underlords, the item increases mana generated from attacks by 100%.

There are also world items which do not have to be equipped to a specific Hero but instead are a passive effects that change the interactions between class combinations. These passive effects are dropped at the same stage and can have a great impact on your playstyle.

The user interface (UI) within Dota Underlords shows a lot of data which can be confusing to navigate at first. But once you get used to the location of your alliances, item box and meters, you’ll be on your way to your first win.

The first column displays the DPS meter and shows different metrics of damage done and taken for your team or enemies. This will be most useful when changing Heroes, whether you’re swapping Heroes from your bench onto the field or deciding on your final composition.

The second image shows your item box, which is where all of your items will be displayed and you can swap and change which Hero equips any of your items.

The last column shows your current alliances with filled in pips as well as your potential alliances with the Heroes on your bench. This will be an important tab to have open during your preparation phase when designing your composition. 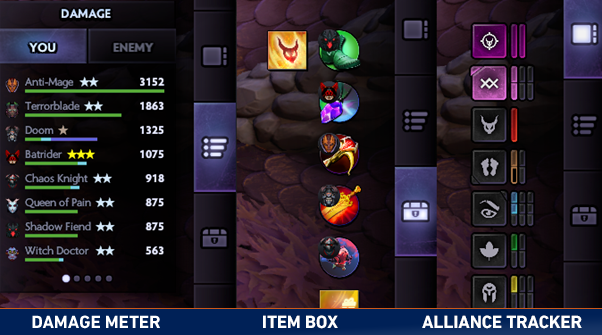 Dota Underlords is available for free on Steam and has just been released in open beta. Valve is supporting the game with regular balance updates and patches as well as taking suggestions from the community on r/underlords.

The first offline Dota Underlords tournament is set to be held at ESL One Hamburg and is sure to set the competitive meta for the foreseeable future.