The evolution of the LCS continues in 2021 with a number of changes to the North American franchise league heading into the new year. Find out more about the changes to the LCS in 2021.

Get great odds and high limits on the LCS with Pinnacle.

With the LCS 2021 season around the corner, Riot Games announced a number of changes to the competitive format to help foster better competition within the region and ultimately raise North America’s chances of success in international competition. The changes to the LCS are also reflected in the amateur Academy League which has also undergone an overhaul.

How is the LCS 2021 season different?

The LCS 2021 competitive calendar officially starts on the January 15, 2021 with the LCS Lock In tournament.

The LCS Lock In is a three-week long preseason tournament that consists of a round-robin group stage and single-elimination tournament bracket. It will feature a $150,000 winner-takes-all grand prize, a $50,000 donation to charity of the winning team’s choice and lastly, earn the team selection for Game 5 of the regular season, if the head-to-head with an opposing team is tied. It is considered a non-consequential tournament, meaning that the performances of teams during its duration won’t have an influence on their regular season standings. 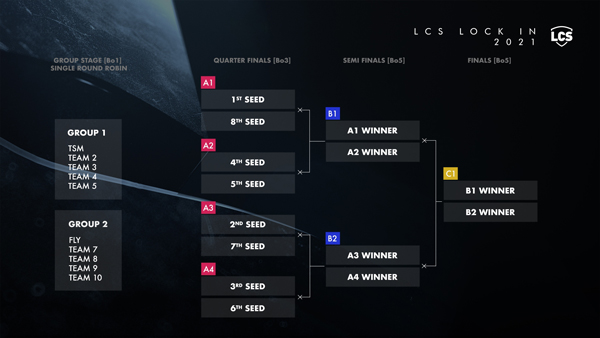 The group stage of the Lock In will feature two groups, with Team SoloMid heading Group A as the number one seed from the Summer and FlyQuest heading Group B as the number two seed. Each group will feature five teams in total, playing matches over four days in a Best-of-One (Bo1) round-robin format within their groups. The top four teams in each group are then seeded into a single-elimination bracket based on their performance. During the bracket stage, matches will take place as a Best-of-Three (Bo3) with initial seeding into the quarterfinals bracket placing a group A team against a group B team.

The tournament will be the first opportunity in 2021 for teams to showcase their evolution in the off-season, whether that be through the introduction of new players, the integration of new coaches or innovation in their playbooks. The LCS Lock In will run until January 31, when the Lock In Champion will be crowned.

Following the conclusion of Lock In, the LCS 2021 Spring Split Regular Season will begin a week later on February 5, and will run for six weeks until March 14. The Spring Split Regular Season is three weeks shorter than its 2020 iteration and will run each weekend from Friday to Sunday, with five matches taking place on each day, meaning that each team will play three matches per week, up from two per week in 2020. 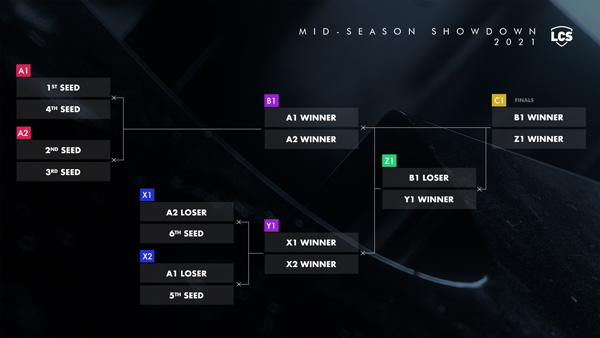 Following a two-month break in which the Mid-Season Invitational takes place, the LCS 2021 Summer Split Regular Season starts on the June 4, and runs for nine weeks up until August 1. The Summer format mimics the Spring but with three extra weeks of regular season play, meaning teams will play a triple round-robin rather than a double round-robin seen in the shortened Spring Split.

Unlike previous years where match records were split into Spring and Summer performances, the 2021 format will retain the match records of each team across the entire Regular Season, with their finishing match record determining seeding and qualification to the LCS Championship. 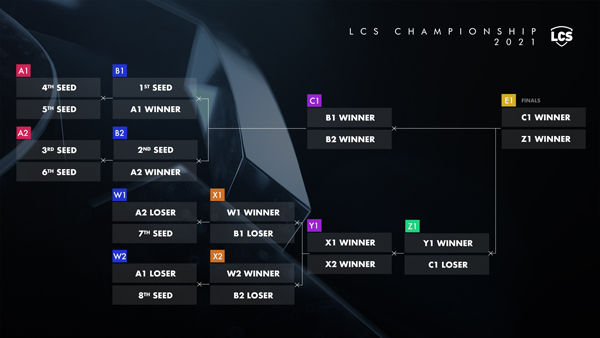 Will the changes improve the chances of the LCS in international competition?

With the changes, North American teams now have three opportunities during the season to experience a bracket format that is similar to that typically used in international tournaments, such as the Mid-Season Invitational and the World Championship.

In addition, the move towards three full days of competition on weekends increases the number of total games played in a season to fall in line with other highly successful regions, such as the Chinese LPL and Korean LCK.

In previous iterations of the LCS, many professional players commented on the lack of incentive to perform during the Spring Split, especially if teams had international aspirations, particularly for the World Championship. With the changes to have a persistent match record throughout the season, teams are now incentivised to play each match at their highest level with the format now rewarding teams that are consistently performing well throughout the regular season and ensuring the best overall teams are represented in the LCS Champion at the end of the season.

The suite of changes to the competitive format for 2021 have long been overdue and highly requested by both fans and teams alike. So will the changes improve the chances of the LCS in international competition? Maybe, but these changes are certainly a step in the right direction.

Find all of the League of Legends odds here.