Gold Difference at 15 minutes in League of Legends

Gold Difference at 15 minutes, abbreviated [email protected], is a metric in League of Legends that tracks the Gold differential between two teams at the 15 minute mark of the game. The metric is used by teams, analysts and coaches to gain a macro perspective of how a team is performing in the early game and allows additional insight into how this early game performance may translate into the mid and late game.

The [email protected] stat is useful for assessing how a head-to-head match could unfold, the strategy a team could take in the early game and how a team might perform over the course of a season.

Bet on league of legends

To provide context to the following section, it is helpful to go over the Early-Game Rating Model created by Tim Sevenhuysen (OracleElixir). The EGR Model is based on a logistic regression model and uses data from approximately 800 professional games to predict a team’s win probability based on the game state at 15 minutes.

The resulting rating produced by the EGR model indicates how well a team has performed from the start of the game to the 15 minute mark (referred to as the ‘early game’).

Why is [email protected] important?

Whilst it isn’t apparent from a beginners’ perspective why the [email protected] stat is important, the EGR Model shows us that it can be powerful for predicting win probabilities. In simple terms, if a team has a positive [email protected], they are more likely to win a match, while a negative value indicates a lower probability of a win.

Using data from professional play in 2019, the EGR Model by Tim Sevenhuysen (Oracleelixir, 2019) provides interesting insight into how [email protected] influences the win probability of a team given an equal game state. 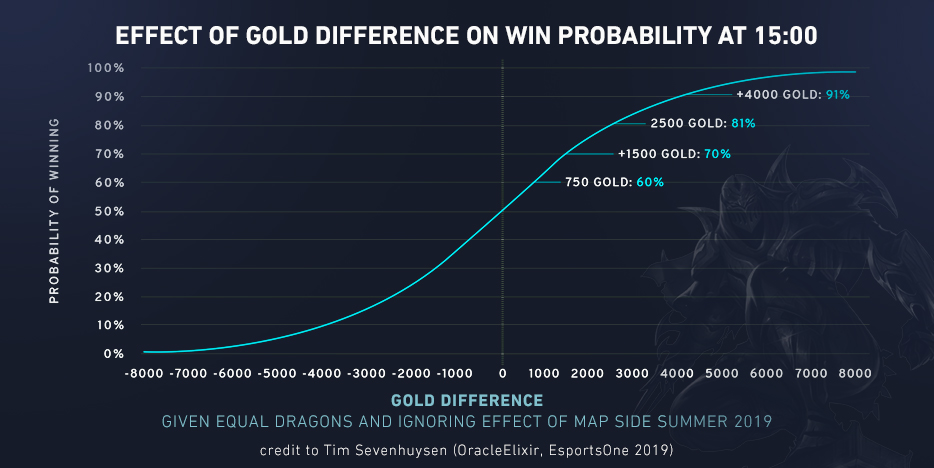 Using Cloud9 (C9) as an example to test the EGR Model, the team achieved a 17 - 1 record in the LCS 2020 Spring split, a 94% win rate. The team had a +2712 [email protected] average over the Spring which would give them a hypothetical 84% win rate, 10 points short of their actual performance. The 10-point differential is narrowed down if we consider that C9 had an 80% Dragon Control Rate (DRG%), if C9 took one Infernal Dragon in a match and performed to their [email protected] average, their win probability increases from 84% to 91.9%, a much closer prediction and within the margin for error.

Informing your League of Legends bet with [email protected]

From a betting perspective, the [email protected] statistic is great for pre-match and in-play analysis. In a pre-match scenario, a bettor can gather the [email protected] average for the two teams in a match, and assess whether a team will be at an advantage or disadvantage in the early game. This pre-match comparison is particularly useful when placing a bet on the Totals and Handicap market of a match.

In-play betting on the other hand, is becoming a more and more popular way to get involved in esports betting. Thus [email protected] provides valuable insight for those placing bets on a live LoL match because it provides a real time indicator of the performance of a team, and whether a bet presents a value proposition to the bettor.

While this article covers why [email protected] can be valuable for betting, the stat shouldn’t be used in a vacuum and should be used in conjunction with other key metrics like Dragon control rate (DRG%) and Baron control rate (BRN%) to paint an overall holistic view of a team’s performance and win probability.

Find out how to improve your League of Legends prediction.