Inform your predictions ahead of the bobsleigh competition at the 2022 Winter Olympics with insight, analysis, and odds from Pinnacle.

The initial part of a bobsleigh track is straight and wide enough to allow players to push the sleigh, which provides the initial boost to the sleigh. The push-off generally takes around six seconds to perform.

Every team focuses on an explosive start and the first push applied by the players provides a significant contribution to the speed of the sleigh throughout the run. The players push the sleigh up to 50 metres and then they board it one by one. Once the push-off is complete, factors like gravity, momentum, condition of the ice, aerodynamics, and the driver’s skill-set play crucial roles in the speed of the sleigh. The brakeman is responsible for applying the brake to stop the sleigh at the end of the race. 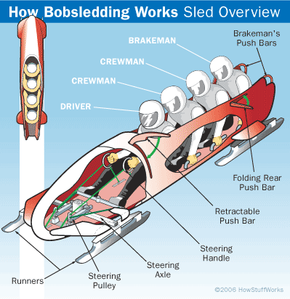 Once on the course, the driver’s job is to steer the sleigh accurately and effectively, ensuring it does not crash and that they make it to the end in a good time. For a driver, the greatest challenges lie during the high-speed corners where they have to control the sleigh’s speed and maintain the sleigh’s position on a tight line in order to prevent it from drifting high on the walls, which not only loses time but may also cause accidents.

By total medal count, Switzerland is the most successful nation in Winter Olympic bobsleigh history with 31 medals. However, Germany has won the most gold medals in the competition with 13 (25 total medals), with the United States also inside the top three on a total of 25 medals.

Bogdan Musiol of Germany remains the most successful athlete in Olympic bobsleigh history with seven medals, whilst his compatriots Kevin Kuske and Andre Lange hold the record for most gold medals with four apiece.

On the women’s side, Kaillie Humphries (5.000*) is the most successful female in Olympic bobsleigh history with three medals (two golds and one bronze). Fellow American, Elana Meyers Taylor (7.000*), also has three medals, but is yet to win gold at the Winter Games.

Both will be competing in the Women’s Monobob, an event that is making its debut at a Winter Olympic Games in 2022. Humphries is the current World Champion but will come under pressure from Germany’s Stephanie Schneider for the gold medal.

Bobsleigh outcome betting by race: Who will win each race? There are several heats to a bobsleigh competition. So, therefore, each athlete/team’s results are collated and the winner of each heat is determined by who got the quickest time.

Bobsleigh overall outcome: This is a Futures bet on the outcome of the whole event (not just a heat) and who will be the winner of the gold medal in that event.

Who is favourite for the Winter Olympic 2-man bobsleigh event?

The two-man bobsleigh event at the Winter Olympics in PyeongChang in 2018 was arguably the most intriguing event of the whole competition. The German and Canadian teams shared the gold medal after finishing with exactly the same time, down to the hundredth of a second. Germany’s Francesco Friedrich (1.133*)- who piloted the German sleigh - is the man to watch yet again, after winning gold in the four-man event in PyeongChang too. Friedrich also holds the record for World Championships - with seven titles to his name.

Where can I bet on bobsleigh?