Ahead of Euro 2020, Pinnacle are taking a look back through the tournament’s history to review a selection of teams who all have a valid right to claim they are the best the competition has ever seen. Read on to learn more about the best teams in Euros history. 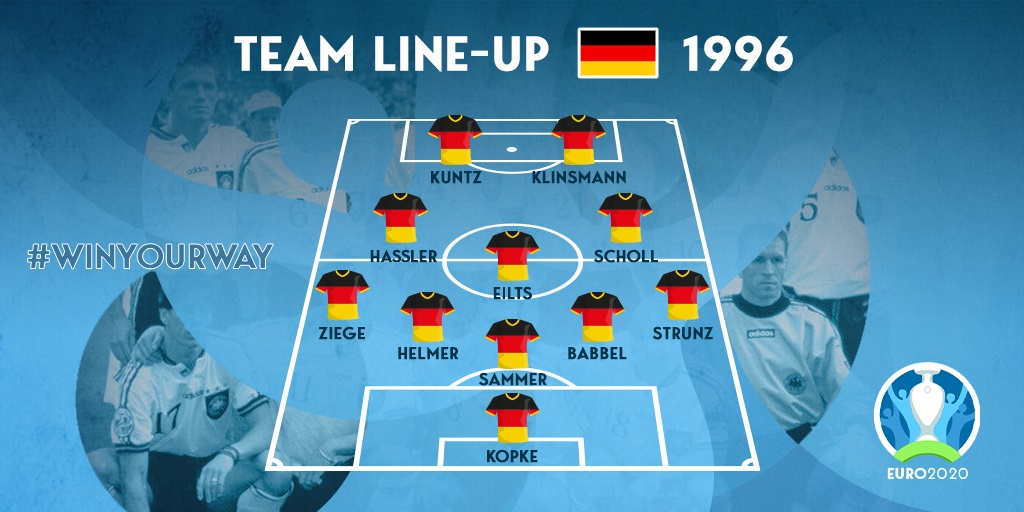 Suitably for a decorated Germany side, Berti Vogts’ champions at Euro 1996 were a clinical model of efficiency. They lifted the trophy despite failing to win any of their final four matches by more than a single goal, as their team, which boasted several established talents, still managed to perform to a standard greater than the sum of its parts.

Germany relied on small but significant tactical tweaks at Euro 1996, most notably in the final.

Germany lined up in what was deemed a 5-3-2 formation featuring a notable reliance on incisive counter-attacks. Matthias Sammer was deployed as a sweeper responsible for relentlessly pressing opponents, while Thomas Strunz and Christian Ziege were the wing-backs who raced up the pitch to spearhead attacks alongside the dynamic striking duo of Jurgen Klinsmann and Stefan Kuntz.

Such an approach enabled Germany to easily defend in numbers, which paid dividends as they conceded just three goals at the tournament. Vogts also used small but significant tactical tweaks during matches, most notably in the final when he substituted Mehmet Scholl for Oliver Bierhoff in order to field three strikers. Bierhoff responded by scoring both the equaliser and golden goal winner.

Germany posted fine form throughout the tournament, topping Group C unbeaten courtesy of comfortable wins against the Czech Republic and Russia followed by a goalless draw against Italy. In the quarter-finals, they beat Croatia 2-1 despite losing Klinsmann to a first-half injury, before edging England on penalties in their iconic semi-final tie.

Klinsmann recovered in time to face the Czech Republic again in the final, although as mentioned, it was Bierhoff’s heroics who secured Germany’s first Euros trophy since 1980. In Sammer’s own words, Germany 1996 “were not nice to look at, but could do the job”, and it is certainly fair to say that they were an impressive and consistent outfit who no one enjoyed playing against. 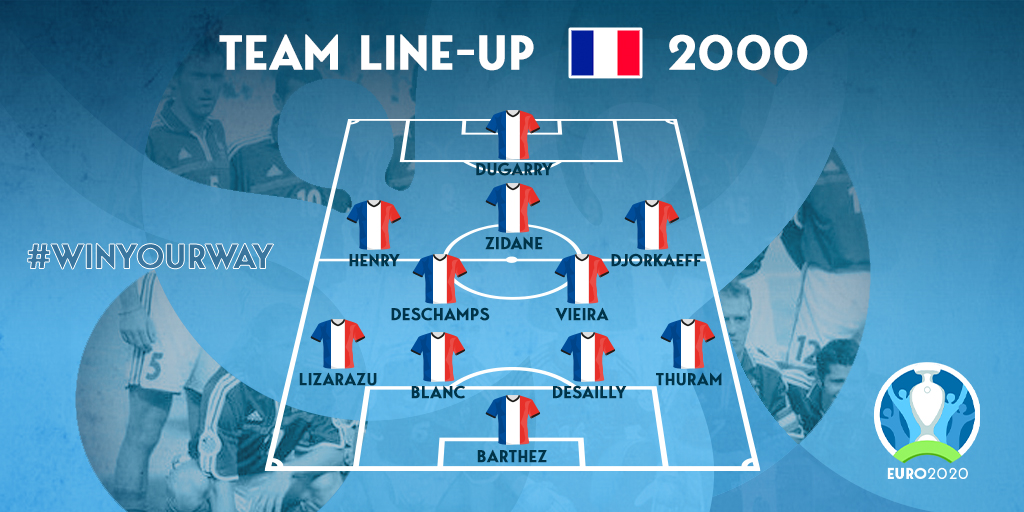 France’s triumph at Euro 2000 highlighted the importance of possessing a good squad as opposed to just a strong starting 11. Roger Lemerre could field a team brimming with numerous world-class talents including Zinedine Zidane, Thierry Henry, Patrick Vieira, and Marcel Desailly, but it was the substitutes Sylvain Wiltord and David Trezeguet who wrote their name into French soccer folklore by coming off the bench to score Les Bleus’ two goals in the final.

France's team at Euro 2000 were praised for always finding a way to win.

Lemerre lined up France in a 4-2-3-1 formation which relied upon physicality and individual talent in equal measure. Henry utilised his pace and silky skills to trouble defences from the left wing, while Zidane played behind the striker with the creative freedom to fashion constant chances for his teammates. Meanwhile, the presence of Vieira and Desailly ensured that any opposition player receiving the ball in the France half would be granted limited time before they were on the receiving end of a stern tackle.

While France called up a squad largely unchanged from that which lifted the World Cup two years earlier, the pre-tournament narratives questioned whether they could repeat such success without home advantage. They quickly silenced their doubters by progressing from a tricky group featuring the Czech Republic, Denmark, and Netherlands, scoring at least two goals in every match.

Their passage to the final was equally littered with challenging opponents. They overcame Spain 2-1 in the quarter-finals before a late extra-time golden goal by Zidane secured victory in the semi-finals at the expense of Portugal. Italy awaited in the final, and when Marco Delvecchio gave them the lead in the 55th minute, Lemerre turned to Wiltord and Trezeguet.

Wiltord took the match to extra-time with a 94th-minute equaliser before Trezeguet netted the golden goal winner to secure France the trophy. The final displayed how Lemerre’s team could rely on an intimidating combination of immense ability and mental resilience to always find a way to win, as well as the fact that you could not lower your guard against them under any circumstances. 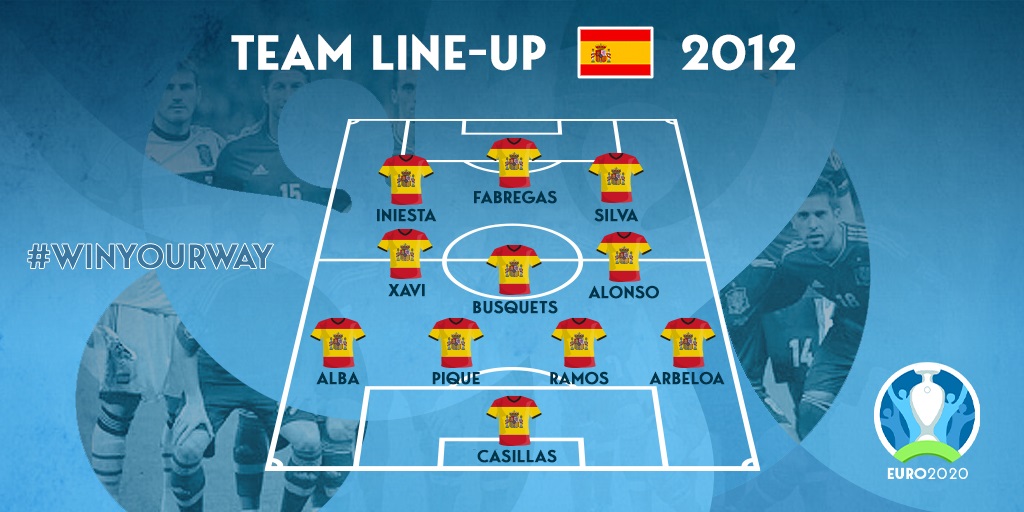 Spain entered Euro 2012 as defending champions and among the firm favourites, but it was at the tournament where their highly revered and successful brand of tiki-taka arguably hit its peak.

With their striking options comprised of the out-of-form Fernando Torres and others who were somewhat inexperienced at international level, manager Vicente del Bosque deployed Cesc Fabregas as a false number nine, as Spain sought to control possession in each match with relentless superiority. The decision proved to be a tactical masterstroke as Fabregas combined with Andres Iniesta and David Silva to effortlessly carve through defences with a combination of guile and flair.

Spain's 4-0 victory against Italy at Euro 2012 remains the biggest winning margin in a Euros final.

Spain opened their tournament with a 1-1 draw against a spirited Italy team but followed that with an early warning shot as they thrashed Ireland 4-0 in a match in which they recorded 26 shots on goal and 929 passes. A 1-0 victory over Croatia confirmed their spot in the quarter-finals, in which they eliminated France by a 2-0 scoreline.

In the semi-finals, Portugal entailed their sternest test in a typically scrappy and aggressive fixture between the two neighbours. After a goalless 120 minutes, Spain eventually triumphed on penalties to offer a reminder that even the tournament’s greatest sides occasionally need to rely on luck.

However, they firmly saved their best for last. In the final they once again faced Italy, only this time around proceedings were considerably more one-sided as Spain deservedly won 4-0 after a dominant display. David Silva and Jordi Alba established the lead in the first half, while substitutes Fernando Torres and Juan Mata both netted goals late on to secure what remains the largest margin of victory in a European Championship final.

Euro 2012 concluded one of the most dominant periods any team has ever enjoyed in international soccer, and notably, Spain have failed to progress beyond the round of 16 at a major tournament since. Spain’s inclusion in this list is arguably exclusively merited by the fact that there perhaps hasn’t ever been a more difficult team to both score against and keep the ball from.