Betting is defined as the action of risking something (usually money) for a potential reward by trying to predict the outcome of an event. While it is a game of risk and reward, betting provides a lot more than the potential for financial gain. What do the betting markets tell us? Read on to find out.

Understanding how we deal with uncertainty

Among the most interesting things we get from the betting market is a greater understanding of how people deal with the unknown. There are plenty of aspects of life that are never certain; will it rain today? Will the traffic make me late for work? Although we deal with these questions on a day-to-day basis, we rarely take time to process why we make our decisions. In sports betting, that all changes.

It doesn’t matter if it’s deciding whether to take an umbrella out for the day, leaving for work ten minutes early to miss the traffic or betting on Manchester United to beat Chelsea. We are dealing with incomplete knowledge in all of these examples. However, for most people, only one of those three options will take more than a few seconds of thought.

Getting caught in the rain without an umbrella and being late for work are both risks, yet they don’t seem to carry the same weight as the money we might stake on a bet. A more tangible risk in the form of money enables betting markets to give us a greater sense of “skin in the game” and therefore allow us to gain more insight into how we deal with uncertainties in life.

An insightful look at the past

An important part of betting for those that take it seriously is logging your bets and trying to learn from past events. However, this is usually in the context of trying to improve the decision-making process for another bet. Whether it’s comparing the odds you bet with against where the market closed or reflecting on whether your bet did offer positive expected value, the purpose of looking back is still to serve future actions.

What betting markets also offer is the ability to look back at single events and analyse how impressive an achievement or how big of a shock an outcome was. Given that odds are simply a representation of probability, we can use betting markets to help understand how likely, or unlikely, something actually was.

Leicester City’s Premier League title win in 2015/16 is widely recognised as one of the biggest underdog stories in the history of sport. It’s easy enough to recognise that Leicester were very unlikely to be crowned champions at the end of their 38-game season. Most people would have had little difficulty in acknowledging that Leicester were actually much more likely to get relegated (finish in the bottom three) than win the title. However, how much further can our grasp of this achievement go?

The stats tell us that Leicester were the first team to win the league outside of Arsenal, Chelsea, Manchester City and Manchester United for 21 years. Claudio Ranieri’s side were also the first first-time winners of the English top flight since 1978, while the club’s wage bill and cumulative transfer value of its squad was one of the lowest in the league. It all sounds very impressive, but even with this information it is still difficult to comprehend how big of an achievement Leicester’s Premier League success actually was.

This is where the betting market comes in. While the 5000/1 odds so often quoted by media outlets does give us a figure to work with (0.02% chance of happening), even that is selling the achievement short. So what was the actual likelihood of Leicester winning the Premier League?

Joseph Buchdahl has acknowledged that his use of Pinnacle’s 1X2 odds for the 380 games in the season before Leicester won the league and a 100,000 run Monte Carlo simulation does have its potential flaws in trying to estimate how likely Leicester were to win the league. Yet it gives us a much better idea than the generic “once in a lifetime” and “never again in a million years” comments that followed Leicester’s success.

A clearer view of what the future has in store?

In addition to adding another layer of context in our assessment of past events, betting markets can also help us look ahead to the future. Although it is interesting to use betting markets to judge the likelihood for success or failure for sports teams, they have the power to tell us much more than that. Things that are more important than who wins a league title.

At the start of the 2016 US Presidential election, Pinnacle's odds gave Donald Trump a 12% chance of becoming the Republican nominee.

Political betting markets have been around for a while but as politics betting becomes more popular, bookmakers are investing more into managing these types of markets. As more money comes in, these markets become more efficient, which in turn makes them a more reliable predictor for how people might vote.

Opinion polls are a staple of elections. Previously thought to be a good indicator for who people might vote for, they have become increasingly distanced from actual outcomes. While still volatile, as the popularity of political betting markets grows, we could begin to see a new method of trying to predict the most likely outcome of an election – the use of political betting markets.

Bookmakers and the majority of bettors were famously pretty wide of the mark at the start of the 2016 US Presidential election. Indeed, Pinnacle initially rated Donald Trump as having around a 12% chance of becoming the Republican nominee for the election. It was when the race reached its final stages that the betting market emerged as an unlikely source of telling the world what was about to happen. 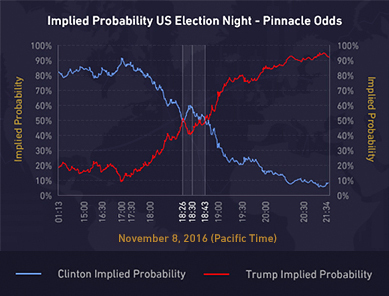 Those watching the live election markets at Pinnacle would have already known that Trump was on his way to victory before the media reported on his victory in Florida (one of the six crucial states previously held by Democrats). How did the betting markets know before the media? It's where people’s information is most valuable.

If you know something before someone else, or at least before the majority, then betting markets provide you with a platform to make money from that information. The bookmaker has a constant stream of people with information like this and can therefore provide us with a more accurate idea of how likely something is to happen, as well as when an event alters the likelihood of something happening.

What happens when we experience a unique event?

In general terms, betting markets help us understand how people deal with uncertainty. Why do people bet on certain outcomes? What biases impact our decision-making process? Are people able to learn from their mistakes? All of these are intriguing concepts that could be (or have been) covered in individual articles. However, betting markets also provide us with a medium to back up our opinions on completely unique events.

In the week leading up to his fight against Floyd Mayweather, Conor McGregor's likelihood of victory more than doubled.

The infamous Floyd Mayweather vs. Conor McGregor boxing match from 2017 will go down in history as one of the most intriguing sporting events the world has ever seen. It was full of hype, opinion and analysis, as well as a betting market that was full of money – indeed, it was one of the most bet on events in sports betting history.

While the circus of press conferences and persistent promotion pushed the fight as the ultimate spectacle, the betting activity was perhaps more interesting than the fight itself. The amount of money bet not only highlighted how much interest there was in the fight, but the odds movement showed just how much contrast there was in opinion for how competitive a boxing debutant would be against arguably the greatest boxer to ever step in a ring.

McGregor, having never professionally boxed before in his life, opened as a substantial 12.00 underdog for the bout (the odds suggest this translates to an 8.3% chance of victory). However, during the week of the fight, McGregor was listed at 5.92, more than doubling his likelihood of victory to 16.9%. What caused the sudden shift in belief in McGregor’s boxing ability? A Mayweather injury? A change to the rules of the fight? The answer is much more simple; money.

To the surprise of Pinnacle’s Trading Director Marco Blume, irrespective of the clear skill divide between the pair, people were so intent on betting on McGregor that despite the odds drastically shortening, the money kept coming in. Of course, there were large bets on the other side but no matter how short the odds moved on McGregor and (in hindsight) how wrong the line was, people were still happy to put their money on the Irishman.

In this instance, the betting market acted as a clear gauge for public opinion. The number of large bets from “sharp” customers was dwarfed by the recreational money from bettors that failed to grasp Conor McGregor’s chances of beating Floyd Mayweather (the favourite-longshot bias in action). It also showed us how difficult it can be for people to process what might happen in a completely unique event.

What do betting markets tell us?

Betting markets exist because people put money in to try and get more money out. While it can be worth investing your time and money to try and make a profit, it can also be interesting to look at betting markets from a different angle. They help us understand how people think and behave, while also providing an insightful look at the past and predictive view of the future.

BR Home
See the latest odds for all markets