The internet is filled with tipsters and touts selling tips and picks across all manner of sports. Some of the records on display are often appealing to bettors who may not want to work for their win. However, there is often more to these records (or lack of them) than meets the eye. Read on to find out more about the impact survivorship bias has on the tipster marketplace.

In 2017 I ran a little back-of-an-envelope simulation to test the impact of survivorship bias in a tipsters’ marketplace, and specifically to test the problem of disappearing tipsters (known as touts in the US). It went like this.

A tipster marketplace is a website that advertises tipsters. Let’s assume that on its first day, it has one tipster, and with each new day, one new tipster arrives. Further, let’s assume that all tipsters advise one daily bet with flat stakes at odds of 2.00 (a reasonable assumption in a US points spread market for example), and that every one of them is a coin tosser with no skill to find a real edge over the bookmaker’s prices beyond picking best market odds, which we will assume represent ‘true’ or ‘break-even’ prices.

A tipster remains in this marketplace until their yield drops below -5% (provided they have had at least 100 tips). What does the marketplace look like after 200 days?

Running a Monte Carlo simulation (1,000 runs) the average number of remaining tipsters in the marketplace was 56, whilst the average aggregate yield from those tipsters was 5.4%. The impression given, as a consequence of the disappearance of poorly performing tipsters, is that the ones left in view are capable, in aggregate, of generating a meaningful profit through skill. Yet we know from the model that in fact every tipster is demonstrating only good and bad luck.

In this latest article I’d like to revisit the impact of survivorship bias with relation to a tipster marketplace.

What is survivorship bias?

Survivorship bias is the logical error of concentrating on the people or things that ‘survived’ some process whilst inadvertently overlooking those that did not because of their lack of visibility. Survivorship bias can lead to overestimating the chances of success because failures are ignored.

In this case the ‘process’ is achieving a betting return of better than -5%. Understandably, tipster supermarkets will only show those tipsters who are currently active with them, or worse still only those who are profitable. Inactive tipsters will likely be removed from display since they no longer offer tips a customer may wish to buy and hence no means of revenue to the marketplace anymore.

We don’t need to possess a degree in advanced statistics to ponder the reasons why a tipster might leave a tipster marketplace. Professional differences of opinion might be one; another might be a successful tipster has decided to go it alone and no longer feels they need the services of the marketplace.

The lesson, as always, should be that for any prospective customer looking to purchase tips from a tipster marketplace, do your due diligence.

Evidently, however, the most common one will be the failure of the tipster to deliver sustained profits. For 14 years from 2001 to 2015, I verified over 300 of them. Around half were unprofitable implying very few of them had any predictive skill at all. Pretty much everything that happened, happened because of chance. Their removal might be their choice to stop tipping, or it might represent the policy of the marketplace to terminate the contracts of poorly performing tipsters.

If you search Google and you will find numerous tipster marketplaces. Presumably such tipster marketplaces keep the data for all their tipsters, past and present, but if you can no longer see the performances of the tipsters who have ceased, there exists the potential to bias our impression of how good the ones we can see really are.

Understandably, no bettor thinking about following a tipster is going to look for unprofitable tipsters; they will just want to see the ones making the most money for their customers. However, failure to appreciate the dangers of survivorship bias can lead bettors to make poor judgements when deciding on which tipster marketplace to use and which tipster to follow.

What are the expected survival chances?

It would be helpful to have some idea of what we might expect to see at a tipster marketplace and use that information to help us make more informed judgements; so, let’s build upon the Monte Carlo simulation I ran two years ago.

Using the same initial assumptions (each tipster tips once per day with flat stakes and odds 2.00; one new tipster arrives every day; and tipsters survive until yield falls below -5% after a minimum of 100 tips have been advised), I extended the duration of the Monte Carlo simulation for 1,000 days and ran 10,000 iterations.

Using my expected betting returns calculator (which can be found here), we know that the probability of survival for an unskilled tipster (as defined above) on day 101 is 69.23%. My Monte Carlo simulation confirmed this result with 69.29% of tipsters showing a yield of higher than -5%.

With each day that passes, the survival chances of coin-tossing tipsters will fall. Those tipsters with yields close to -5% after 100 tips will likely be the first to drop out after a few more unlucky results. However, the rate at which this survival chance falls will diminish as tipsters accumulate ever more tips simply by virtue of the law of large numbers. Showing a yield of -5% is much less likely after 1,000 tips than it is after 100.

The chart below plots the trend in survival probability from 101 to 1,000 days. 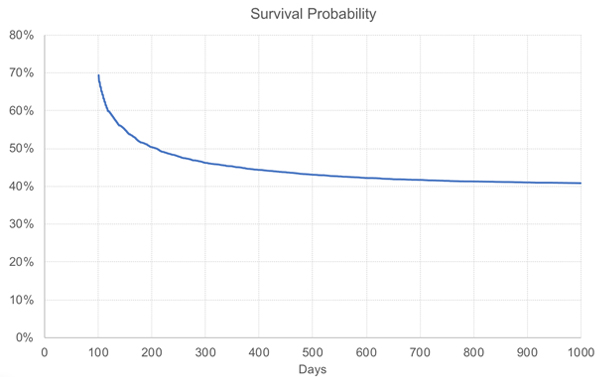 The expected profitability of survivors

It is still the case that every tipster left surviving has a long-term expectation of 0% profit. That is how the model was designed. But with the unlucky ones dropping out, what do the profits of those surviving look like?

The next chart shows the expected yields for surviving tipsters from days 101 to 1,000. The initial spike in day 101 to 120 is probably on account of the initially faster tipster cull rate (see the chart above) as tipsters close to the -5% yield threshold drop out after a few more unlucky results.

Thereafter, there is a gradual decline in expected yield, as would be predicted with the law of large numbers. My betting returns calculator tells us an individual coin-tossing tipster has about a 31% chance of showing a +5% yield after 100 tips. This drops to less than 6% by 1,000 tips. 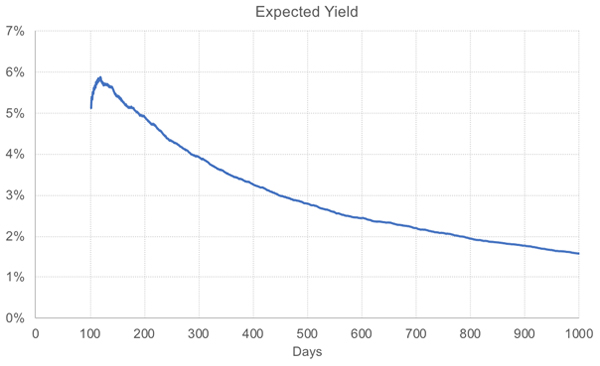 How many survivors are profitable?

The final chart illustrates the expected percentage of surviving tipsters that will be profitable out to 1,000 days. Although by day 200 there are fewer than 50% of the original tipsters surviving, those who have made the cut have more than an 80% chance of showing profits. Even after 1,000 days it is still over 70%. 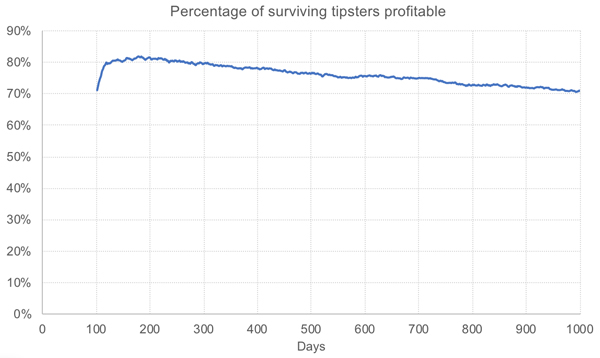 Survivorship bias in the tipster marketplace: What have we learnt?

Evidently the results of this model will be very sensitive to initial conditions. They would change with the number of tips issued each day, with the odds and stakes advised, and most significantly with the criteria which determine when a tipster is removed.

However, there is a broader point that should be clear from this modelling. A tipster marketplace filled mostly with unskilled tipsters, and nearly all of them categorically are, will easily give the impression that it is offering tipsters that have more than just luck.

Failure to appreciate the dangers of survivorship bias can lead bettors to make poor judgements when deciding on which tipster marketplace to use and which tipster to follow.

This is not to argue that there will be none with skill. Possibly, a small number will possess it. Rather, it is to emphasise that far fewer will be capable of generating consistent profits with more than just luck than the data you will be allowed to see suggests.

A marketplace of point spread handicappers with several hundred tips to their names, for example, could collectively be showing an average return of 3 to 5%. Individually, however, the chance of an unskilled handicapper achieving this is only about 20%.

Some marketplaces have published data for collective tipsters’ returns, with one example showing -2%. In this particular case, it shows that the vast majority of those on their books are simply losing the equivalent of the Pinnacle margin. Other marketplaces, however, may be less transparent.

The lesson, as always, should be that for any prospective customer looking to purchase tips from a tipster marketplace, do your due diligence. Ask the marketplace for data on the tipsters no longer tipping, and why they stopped tipping. If they are unwilling to provide details, you now know what’s behind their reluctance.