Bettors often strive to be labelled as “sharp”. This is normally another way to suggest someone is skilled enough to win in the long term, but only very few bettors will actually fall into this category. How many bettors are sharp? Read on to find out.

A question that has interested me for a long time is how many people really win at betting. When I first wondered about this, a quick search revealed a commonly quoted maxim: 97% of bettors lose. OK, so there’s some variance around this figure; sometimes it might be 95% and sometimes it might be 99%. But what does it actually mean? And more importantly, how valid is it?

Let’s deal with the easy one first: what does winning mean? Naturally, anyone can win a bet through luck. Quite a lot can actually win enough bets to make a longer-term profit, but again that’s just because of luck. In fact, about a quarter of point spread or Asian handicap bettors playing to Pinnacle’s typical margin could be in the black after 1,000 bets. About 1 in a 100 could still be profitable after 10,000. For some that would represent a lifetime of betting.

But this isn’t really what we mean by winning. In the long run, for most people, luck runs out. That’s simply the law of large numbers. Instead, we are interested in those bettors who can win through skill as well, not just luck. Such players have found a way to generate what is called expected value. The bookmaker expects these players to be showing a profit even after good and bad luck have cancelled each other out. How many bettors hold true expected value?

To my knowledge there are no published research papers discussing the topic. If anyone knows different please get in touch. I’ve previously attempted answering this question by plotting the distribution of bettors’ performances. Since it looks almost the same as a distribution of performances that would arise by chance, I have concluded there really can’t be very many skilled bettors at all.

In this article I’ve attempted to look at this again from a different perspective: the bookmaker’s, and more specifically how they evolve their markets. I must stress here that what follows in this pair of articles is very much my own thought experiment, full of potential caveats, errors and holes, and is in no way meant to represent the way Pinnacle manages the evolution of their markets.

Since no bookmaker will tell us how they do it, we must work backwards. Study the way the odds actually evolve and see if we can build a model, changing its parameters, until we can replicate the real world. Whilst I would never advocate this sort of data mining when developing a betting methodology, for this exercise it will have to suffice.

Go on twitter or a well-visited betting forum and you’re likely to come across various debates about how bookmakers manage their lines (odds). One standard idea is that having posted what they assume to be the most accurate figures, they then seek to balance the action to ensure that no matter what the result they will make a profit.

About a quarter of point spread or Asian handicap bettors playing to Pinnacle’s typical margin could be in the black after 1,000 bets.

The evolution of a market by a bookmaker in the lead up to a match’s start time, then, represents a type of price discovery. In the financial markets this is known as determining the price of an asset in the marketplace through the interactions of buyers and sellers. It’s much the same for a sports bookmaker; we just replace asset price with odds, and buyers versus sellers with backers of team A versus team B.

One problem with this model concerns how you start the market evolution. Clearly, at the opening of a market there is no traded volume. You must choose a non-zero figure otherwise you can’t get the model started. But what to choose? The smaller the number relative to the initial action, the greater the initial odds movement.

Suppose in this example we’d started with a theoretical market ‘seeding’ of $10 on A and $10 on B. A $10 action on A move the odds to 1.46 (and 2.93 for B). Such a large move would clearly be unwanted since it would be far too far from the initial model estimates, encouraging sharper bettors to take advantage with large stakes.

Clearly the bookmaker must seed their market with some theoretical collateral; quite what size it will be will depend upon their customers’ staking.

A model for market evolution

To replicate a bookmaker’s price discovery, I built an Excel model. The model consisted of a fictional market (team A vs. team B) whom the bookmaker regarded as equally likely to win (fair odds 2.00). A margin of 2.5% was applied (bookmaker’s odds 1.95). The odds were then evolved over 1,000 iterations. At each iteration a bettor would be given the opportunity to bet or ignore the current price for either A or B.

If the bettor ignored both the prices for both A and B (assuming neither to hold any value), the prices would remain unchanged. If they bet one of the prices for A or B, the odds would be updated according to the price discovery principles described above.

Bettors’ staking preferences were assumed to conform to a power law distribution, attempting to replicate a likely real-world scenario. Thus, whilst most bettors had preferences for stakes around 1 to 5 units, a few wanted to bet 10+ units, fewer still 100+ units and there were occasionally one or two hoping for 1,000+.

Bettors were considered to be either skilled or unskilled. Skilled bettors were assumed to know that the fair price for A or B was 2,00. Hence, they would only bet when the odds were longer. Unskilled bettors were assumed to simply follow the crowd. That is to say, they were influenced by the currently published prices at any stage in the market evolution. Given that anchoring, recency and availability heuristics commonly influence people when asked to make judgments about uncertainty, this might be a reasonable assumption.

Clearly the bookmaker must seed their market with some theoretical collateral; quite what size it will be will depend upon their customers’ staking.

To give them a bit of freedom, an unskilled bettor’s perception about the true odds was also assumed to vary according to a normal random distribution about the current prices. For example, if the current price for A was 1.95, and 2.00 with the margin removed, some might believe the true price to be 1.99, 1.98, 1.97 (or 2.01, 2.02, 2.03) and so on. A proportion would believe the true price to be shorter than 1.95, and thus a published price of 1.95 would represent value.

Thus, there were always some unskilled bettors who would believe one of the existing prices for either A or B to represent value; in my model they would then place their bet with their assigned stake. Of course, without this variable misplaced overconfidence no bets would ever be struck in a rational marketplace. Typically, with the level of freedom I applied to unskilled bettors, about half of them were able to find something to bet on during a typical series of 1,000 iterations.

There were two further model assumptions. Firstly, the skilled bettors placed the biggest stakes. Whilst this may not precisely represent the real world, it is reasonable to assume that those bettors who’ve proved themselves capable of holding expected value are more likely to take bigger risks, particularly since they are likely to be doing so with previously accumulated capital from earlier successful betting. Secondly, for my initial model investigation a bettor’s stake was limited to no more than the total volume of previously placed bets.

For example, if a bettor’s preference for a stake was 50 units, and if only 30 (including market seeding) had been traded to date, a stake limitation of 30 would be applied. With such a scenario, as the market continues to evolve and more action accumulates, more high-staking bettors will have their whole preference accepted. This would seem representative of a typical Pinnacle market which sees actual stake limits increase as more volume is traded.

The time series below shows how the odds for A and B evolved assuming a market seeding of just 1 unit each for A and B and no skilled bettors. Evidently some of the swings in the odds, particularly in the early part of the market evolution, are far too large to be representative of a real market. Any large stake dramatically influences the odds calculation based on the price discovery principles described above. Similar evolution of odds was observed even where skilled bettors populated the market. Obviously, the problem lies with either the magnitude of the theoretical market seeding, or the size of stake limitation. 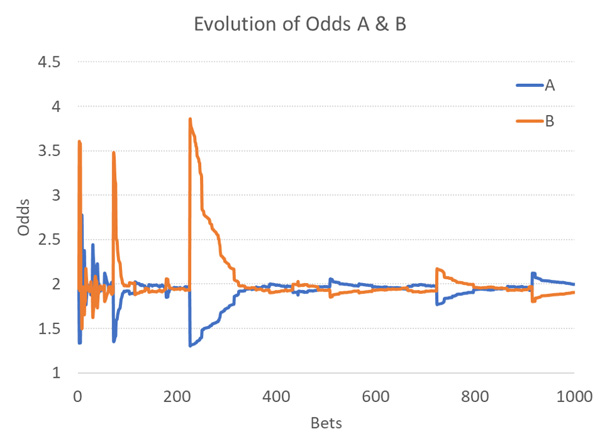 How we will solve these problems, and what these model scenarios will have to say about the proportion of bettors who are skilled, will be addressed in part two of this article.