The point spread is one of the most popular betting markets for bettors. While this market is meant to “levelling the playing field” for the teams taking part, the bookmaker could potentially be making it less level than what we are led to believe. Do bookmakers take positions on point spread markets? Read on to find out.

In 2005 Steven Levitt (economist and co-author of the book Freakonomics) published an influential paper questioning the accepted view that sports betting markets are efficient, participating bettors are collectively wise and bookmakers are earning a commission by balancing the action.

On the contrary, Levitt argued, bookmakers instead take risk positions with respect to the outcome of games to the extent that they publish odds which, after their margin has been taken account of, deviate from true or market equilibrium prices based on a retrospective analysis of results. They do this to achieve higher proﬁts by systematically exploiting biases of bettors who are less skilled than themselves at predicting the outcome of games and are also likely to act less rationally.

Levitt came to his conclusion ostensibly via two significant observations. Firstly, for the 21 NFL seasons between 1980 and 2001, only 48.2% of favourites managed to cover the spread (the negative points handicap applied to the favourite to equalise prices for both teams). Secondly, in an NFL betting contest with 285 entrants making 19,770 bets on 242 games (2001 season), 60.6% were placed on the favourite. If such over-betting of favourites was typical in a real market environment, these two figures would not be consistent with a traditional role of passive market maker.

Several caveats should be recognised. Firstly, Levitt’s player sample was small. Secondly, the players were engaged in a competition, not real market action. Consequently, and thirdly, we have no idea about the proportions of money wagered; unsurprisingly, bookmakers never reveal that data. The figure of 60.6% applied to the number of bets, not total volume, and the two don’t necessarily correlate. Finally, Levitt restricted his analysis to just one market.

For this two-part article, then, I want to extend it to another, the NBA point spread, to investigate whether bookmakers may in fact take positions. If they do, this has consequences for the efficient market hypothesis, that odds are a reliable reflection of true outcome probabilities. In the second part I will look at whether the evidence from the NBA spread market lends supports to Levitt’s conclusions. In the first part, however, I will begin by looking at what a bookmaker taking a position actually looks like.

Imagine a simple two-way contest where the true probabilities of team A and team B winning are 50%. The fair odds for both in this book will be 2.00. Now suppose the bookmaker applies a 2.5% margin distributed equally; they will offer odds of 1.95. For each such contest there are 100 bettors betting $1 on either team A or B. Finally suppose there are 100 such contests, implying a total bettors’ turnover of $10,000. What profits can the bookmaker expect to make as either the proportion of bets on teams A and B, or the frequency with which those teams win, varies?

What happens if team A wins less or more than team B? Consider the extreme example of team A never winning. The bookmaker will take all $5,000 on bets placed on them without having to pay anything back to team A bettors. On the other hand, all bets on team B are winners. At odds of 1.95, the bookmaker will have to pay out $4,750 in profits to those bettors. Hence, the net book profit remaining for the bookmaker is still $250.

Whilst the precise distribution of profits and losses for the bookmaker from bets placed on teams A or B will vary, the net returns for offering a book where money is balanced will always match the bookmaker’s margin. It’s unsurprising, therefore, that bookmakers aiming to balance the action is such a popular hypothesis.

The impact of biased bettors

This time, let’s suppose that bettors don’t bet in equal proportions on teams A and B. What happens to the bookmaker’s returns? Provided teams A and B win 50% of the time, they will still be the same: $250, or 2.5%. Suppose no one bets on team A.

It’s easy to see why a bookmaker would want to set accurate lines. Provided they are a reliable reflection of the true outcome probabilities, it doesn’t really matter how biased bettors’ preferences for either team A or team B might be.

Things become more interesting when both the win percentages and the volume of bettor action deviate from the 50-50 equilibrium. Following Levitt’s findings, let’s suppose now that 60% of bettors back team A, but it wins only 48% of the time.

In this scenario, because of the biased weight of money on team A, the bookmaker can achieve a better return if team A wins less than 50% of the time. In this thought experiment our bookmaker is getting lucky because we had set the true outcome probability at 50%.

In a real betting market, however, Levitt supposed that if the bookmaker priced spreads as if they were 50-50 propositions, but secretly knew that the side bettors preferred to bet on would win less than 50% of the time, he would increase his returns beyond his advertised profit margin.

Although behaving this way involves taking a risk position with respect to his bettors, the bookmaker, Levitt argued, is happy to do so, knowing that he is better at estimating true outcome probabilities than his customers and is more likely to behave rationally. 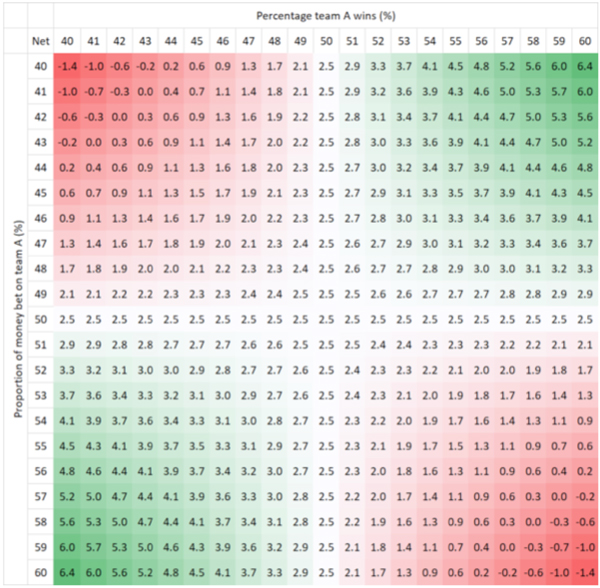 You can see clearly that where action is balanced or where team A wins 50% of the time, the profit over turnover matches the theoretical profit margin. In contrast, the bookmaker can actually do better where the bettors bet proportionally more on team A, but it wins less of the time. The same is also true for team B; the heat map is essentially a mirror image split along the top left to bottom right diagonal.

Why is there a point spread favourites bias?

Let’s return to Levitt’s findings. Specifically, why is it that bettors seem to prefer to bet on a point spread favourite, the side with the negative points handicap? Levitt never proposed an explanation, but others have. Joseph Simmons, professor at the University of Pennsylvania's Wharton School, and Leif Nelson, professor at the Haas School of Business at the University of California, Berkeley, provided a psychological account for where the bias might originate from: intuitive confidence.

We should remember that Levitt’s data is 20+ years old. Much has changed in the world of online sports betting since then. More bookmakers, more bettors, more prediction models, more markets, more money, more everything.

Just as Levitt had found, Simmons and Nelson observed that almost two-thirds of bettors making online predictions during the 2003 and 2004 NFL seasons backed the favourite to cover the spread. This rose to 70% for college football. Furthermore, the greater the intuitive confidence bettors expressed in one side winning, the greater the confidence they held that this team would also cover the point spread.

Such an intuitive bias arises through substituting the cognitively more complex judgement of predicting the points differential between the teams with the easier one of simply predicting which team will win. By contrast, where teams were more evenly matched, the intuitive confidence about which would win was weaker and hence a bias towards backing one or the other to cover the spread was smaller.

Unfortunately, as for Levitt’s investigation, the research did not consider the volume of wagers, only the percentage of bettors. Simmons and Nelson attempted to rectify this shortcoming by analysing the judgements of 178 participants asked to predict the outcome of 226 Sunday games in the 2007 NFL season with hypothetical stakes.

Their findings were the same. More intriguingly, they found that even when they told participants that the spread had been manipulated against the favourite, they still found almost as many participants willing to believe that the favourite would cover it.

If a bookmaker can increase their take from 2.5% to 3.3% with a little manipulation of the spread that goes unnoticed by bettors, could they conceivably go further? 60% of point spread bettors backing a favourite that wins 45% of the time would increases his return to 4.5%, and to 6.4% if the favourites covered the spread only 40% of the time.

The answer to this is probably a common sense one; eventually bettors would notice. Intuitive bias might be strong enough to blur the distinction between 48% and 50%, but increase the spread manipulation a little more, and bettors’ behavioural judgements would likely snap to a new equilibrium, with fewer of them backing the favourite to cover the spread.

You can see from the heat map above that if that proportion fell below 50%, the bookmaker would then be doing worse than their theoretical margin. Realistically there is only so much they can get away with before bettors will notice. As for the favourite–longshot bias in fixed odds betting markets, cognitive biases exist but they are weak and exploitation of them has its limits.

Levitt’s conclusion that bookmakers are not merely passive commission earners but actively taking risk positions with respect to their customers by manipulating point spread markets to increase their returns implies that their prices cannot be efficient, matching the true outcome probabilities. On the contrary, how could they be if spread prices that imply a 50% success rate are only covering them 48% of the time?

We should remember that Levitt’s data is 20+ years old. Much has changed in the world of online sports betting since then. More bookmakers, more bettors, more prediction models, more markets, more money, more everything. In relative skills markets like sports betting, greater competition should typically imply a drive towards greater efficiency and more accurate prices through a process described by the paradox of skill.

There is much that makes sense about Levitt’s suggestion that sports betting is not like a financial market, with action facilitators choosing to be part of that action to increase their profits. But can more recent data analysis continue to offer support to this hypothesis. In part two of this article, I aim to find out by taking a look at the NBA point spread market.