Video poker is a casino game based on five-card draw poker that offers a fast-paced experience whereby rounds can be completed in a matter of a few seconds. Here is a straightforward guide on how to play Video poker, how you win at the game and the different variants available.

The objective of Video poker is to get the best possible hand from the five cards you are dealt. You will be dealt an initial hand of five cards and then asked which (if any) you want to hold. Any cards you do not hold will then be replaced and the outcome of the round determined.

Cards are ranked from highest to lowest as follows; Ace, King, Queen, Jack, ten, nine, eight, seven, six, five, four, three, two. While Ace is high, it can serve as high or low when at the start or end of a Straight or Straight Flush, meaning the ranks involved can be comprised of ten, Jack, Queen, King, Ace or Ace, two, three, four, five.

The most popular variation of Video poker is known as Jacks or Better, which has the following usual list of hands that reward payouts: 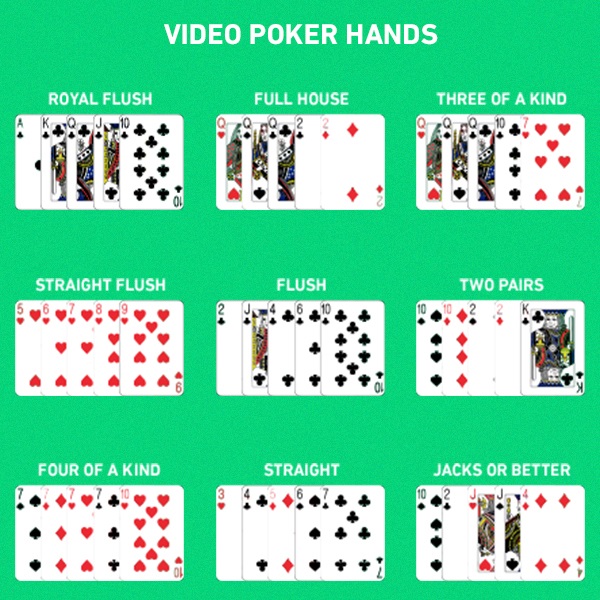 An important component of Video poker is what is known as the pay table. This lists the rewards you will receive based on the hand you get and how much you bet. On Video poker machines at casinos, this will often be displayed on screen as you are playing. When playing a Video poker game either at a casino or online, it is important to check the pay table before you begin.

Here is a typical pay table for a Jacks or Better Video poker game. The values listed are the number of credits you will receive if you get the specified hand having bet the listed number of credits (note these values may differ from game to game): 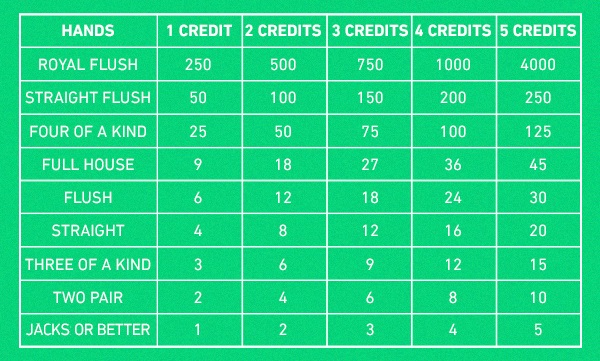 Based on the pay table above, here are examples of how two Video poker rounds can play out: 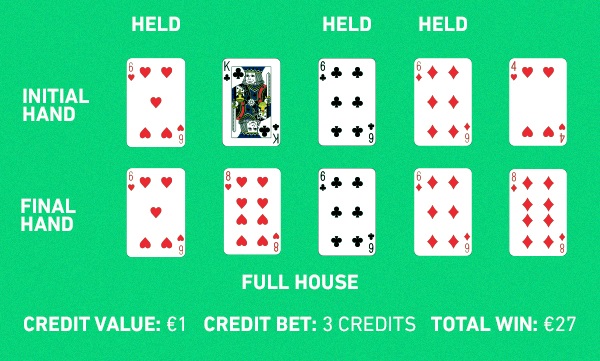 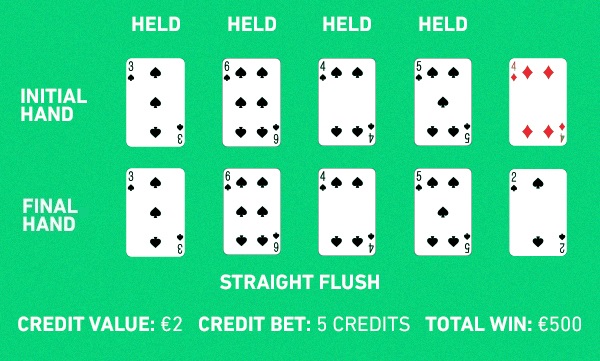 Common variants of Jacks or Better pay tables are 10/6, 9/7, 9/5, 8/6, 8/5, 7/5 and 6/5. All of these will offer marginally different house edges and expected returns for the player, generally increasing the former and reducing the latter as the two numbers get lower.

Beyond Jacks or Better there are several common variants of Video poker that feature slightly different rules:

This version uses a 6/5 Jacks or Better pay table, with the difference that the player also receives a payout if their hand contains a minimum of a pair of tens.

This is a version of Jacks or Better with different payouts for a Full House, Flush, Straight, Three of a Kind and Two Pair, changing from nine, six, four, three and two credits won per credit bet to eight, eight, eight, three and one respectively.

This is a version where after a specified number of Flushes have been won (either in one game or across multiple at a Video poker machine), the payout for the next Flush won on the maximum five credits bet is increased from the usual 30 credits to 100 or 125.

This version rewards different payouts for a Four of a Kind depending on the rank of card it is achieved with.

Some Video poker games offer Double Bonus Poker, whereby these values are doubled to 50, 80 and 160 credits per credit bet respectively.

This is a version with a Joker in play, which can be used to represent any rank. As a result, this offers two more winning hands:

In Joker’s Wild, the minimum winning hand is often changed from Jacks or Better to Kings or Better.

This is a version in which twos can be used to represent any rank. As a result, this offers three more winning hands: 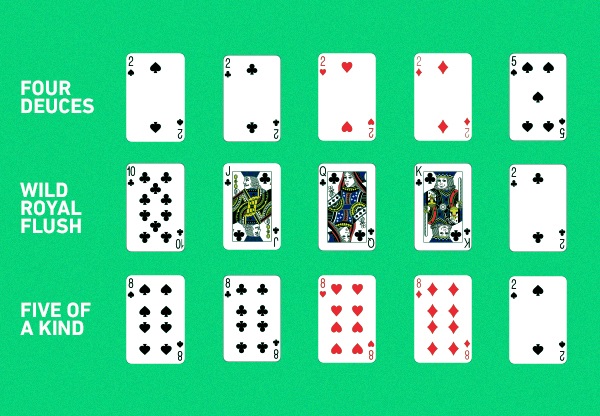 In Deuces Wild, Jacks or Better and Two Pair often do not reward a payout and the minimum winning hand is Three of a Kind.

If you want to learn more about the odds and probabilities involved in Video poker and therefore how strategy can be applied to it, read our guide to Video poker odds and strategy.

Pinnacle Sports Casino has a wide range of Video poker games for you to enjoy, including Jacks or Better, Aces and Faces, Double Double Bonus Poker and many more!