Baccarat is an interesting and popular card game that is probably one of only a few you are likely to come across in a casino that allows you to bet against yourself to win. Here is a simple guide on how to play Baccarat, including the rules and probabilities involved and the strategy you should bear in mind when you are playing.

The objective of Baccarat is to successfully bet on whether the next round will be won by yourself, the banker or a tie.

A round is won if the value of the player or banker’s initial hand is worth eight or nine (referred to as a natural, with nine beating eight) or tied if both get a natural of the same value.

If neither achieve this, the round is won by whoever’s hand has the highest value up to nine after they have been dealt a third card, if they are allowed to receive one. If the two hands have the same value after this stage, the round is tied.

Baccarat often uses eight decks and can have a single player up to as many as fourteen (not including the banker).

Face cards (Kings, Queens and Jacks) and 10 are worth zero, Aces are worth one and cards from two to nine are worth their pip value (the value stated on the card).

The maximum Baccarat value a hand can have is nine, meaning hands with a value up to nine count as such. For hands that have a value of 10 or more, only the last digit of their value is used (for instance, a hand comprised of a six and seven would not be worth 13, but three). 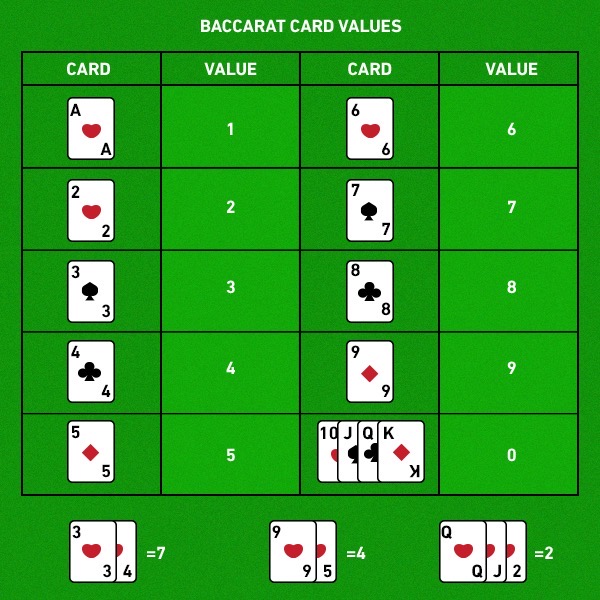 There are multiple variants of Baccarat, although by far the most popular and used at casinos is Punto banco, which is outlined below. Common alternatives include Chemin de fer (sometimes referred to as chemmy), Baccarat banque (also known as à deux tableaux) and Macao, which are covered in our guide to Baccarat variants.

How to play Punto banco

In punto banco, the decks are shuffled in a shoe with a cut card placed in front of the seventh from last card. The banker burns the first card face up and depending on its value (with Aces worth one and face cards worth 10), then precede to burn that many cards face down. Bets are placed at the start of the round before the cards have been dealt. At this stage a player may also place a Baccarat side bet, which is covered in its own article.

The player (‘punto’) and banker (‘banco’) are then dealt two cards, alternating between the player and banker.

If neither has a hand worth eight or nine, it is then determined whether the player can receive a third card. If the player’s initial hand is worth zero to five, they can do so, and if it is worth six or seven, they must stand.

This is summarised by the table below: 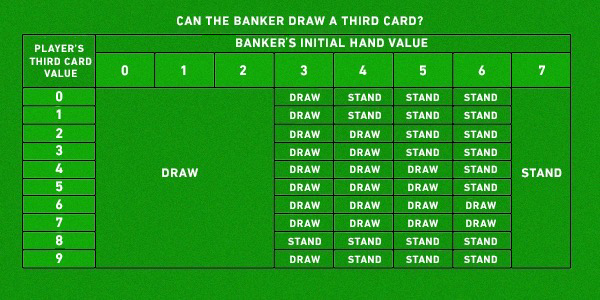 After all of this has been determined and any cards have been dealt, the winner is the person who has the hand with the higher value up to nine. If the player and banker have hands with the same value, the round is tied.

Here are is an example of a Baccarat round based on a game featuring three players and the banker: 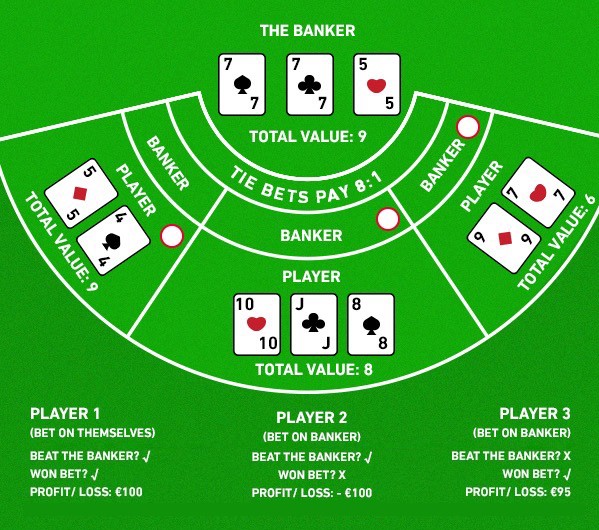 As the odds favour the banker, the casino secures a house edge by charging a 5% commission on winning bets on the banker. The respective house edges for betting on the player and banker and a tie can be calculated as follows:

As most of time the player’s only action in a round of Baccarat is to place a bet at the start, there is limited strategy that can be applied to the game. However, there are tips informed by the probabilities and house edges involved that are helpful to consider.

In Baccarat, it is important to not fall into the trap of reading into patterns that are not there.

Firstly, the most sensible approach is the bet on the banker in any given round, as it is the most likely outcome and offers the smallest house edge irrespective of the commission applied. Whilst the latter still dictates that you are likely lose €1.06 for every €100 bet on the banker, this is a better predicted return than betting equivalent amounts on the player and a tie.

Indeed, betting on ties is very difficult to justify. Whilst the 8:1 payout may suggest it is a proficient route to boosting your winnings, a 9.52% probability translates to it occurring only once every 10.5 rounds. This offers the aforementioned very large 14.36% edge to the house, underlining that it is firmly a poor value bet.

It is also important to not fall into the trap of reading into patterns that are not there. Even if the banker has just won ten rounds in a row, their chances of winning the next is still 45.86%, so treat each round as independent.

Finally, if a casino uses less than eight decks and charges less than 5% commission on banker bets, playing at their tables will allow you to enjoy a narrowly better banker win probability and more favourable house edges respectively.

If you’re interested in alternative ways to play Baccarat, check out our guides to Baccarat variants and Baccarat side bets. If you want to learn more about Baccarat beyond how to play the game, you can read about the history of Baccarat.

Pinnacle Sports Casino has a wide range of Baccarat games for you to enjoy, including Live Baccarat, 3D Baccarat, Punto Banco and many more!