On the surface, Craps may look like a game where people are simply throwing a pair of dice across the table. However, there are odds, probabilities and house edges involved that dictate your chances of winning any given bet and therefore what strategies can be applied to the game. Here is a runthrough of Craps odds and strategy that you should bear in mind when playing.

The best place to start in determining the odds involved in Craps is assessing the probability of getting any given number from a dice roll featuring two six-sided dice:

As you can see, the most likely dice roll is a seven, which will occur on six of the 36 possible combinations from the two dice. The next two most likely are six and eight followed by five and nine and so on, reducing in probability as you move further away from seven lower and higher respectively.

A combination of the two tables above can be used to calculate the overall approximate chances of winning any common Craps bets, as well as the house edge involved:

The probabilities of winning and associated house edges for several other Craps bets are as follows: 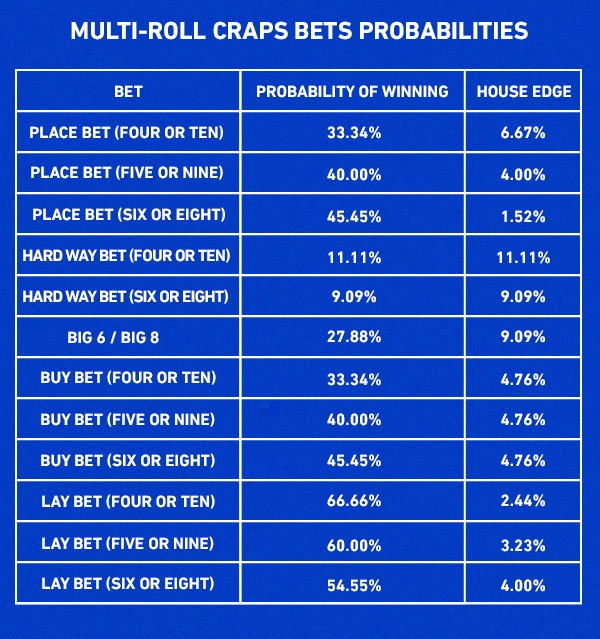 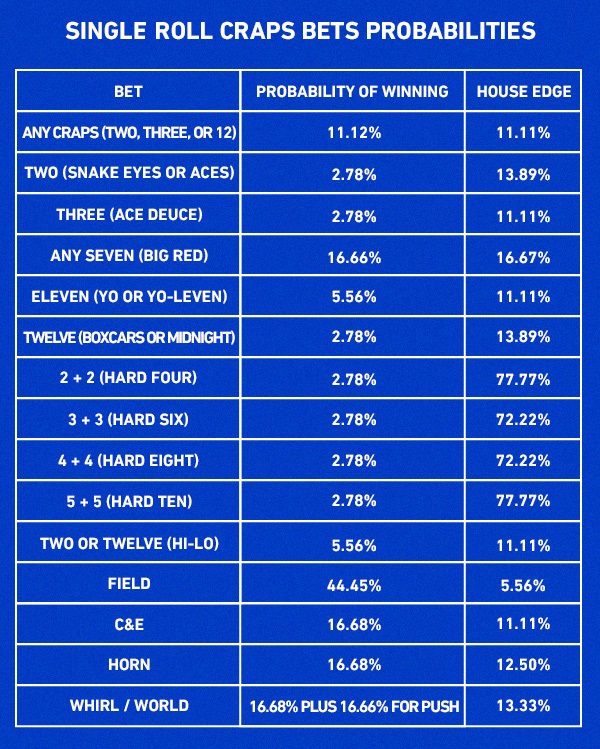 Many Craps strategies thoroughly recommend predominantly focusing your bets on the common Craps bets that are often made in every round – Pass line, Come, Don’t pass, and Don’t come bets. These possess house edges (and therefore expected returns) which can only be bettered by Odds bets in the entire game.

Should the round enter the point stage, it is always advisable to back up any one of these bets with Odds bets. Although the win probabilities may seem off-putting, as they pay at true odds they actually help to reduce the house edge, hence why at many casinos Odds bets have restrictive maximum limits. Odds bets reduce the house edge as follows:

Aside from the four main bets and Odds bets, the only other bet players should consistently look to make are Place bets on six or eight. While those seeking big wins may be unmoved by the 7:6 payout, these can prove useful if the point is any other number as they offer only a 1.52% house edge.

On top of this, Place bets on six or eight should always be made of instead of the comparable Big 6 or Big 8 bet, which offers a weaker payout for the same outcome and therefore has a considerably worse house edge of 9.09%.

Remember that for any individual dice throw, the chances of getting any specified number doesn’t change.

A common misconception is that a Field bet also presents greater value than any Place bet, as it covers more possible outcomes. However, a Field bet actually has a slightly worse win probability than a Place bet on six or eight of 44.45% and more importantly a higher house edge of 5.56%.

Indeed, virtually no single roll bets present any justifiable value and therefore they should merely be considered a bit of fun. The vast majority offer minimal win probabilities against large house edges of at least 10%. While they can provide substantial payouts on minimal bets, the law of probabilities dictates that they do not entail a secure method of boosting your winnings and will deplete your funds over a long period of time.

This illustrates the point that any Craps bet should be made with a comprehensive understanding of the house edges involved.

For instance, one popular Craps betting strategy is The Iron Cross, whereby a player places a Field bet and Place bets on five, six and eight to cover every possible outcome apart from a seven. Initially this seems an attractive prospect, particularly as it has an 83.34% win probability for any given roll.

However, by virtue of the fact that it loses everything on a seven (the most likely individual outcome) and it is combining various different bets, it still has a house edge of 3.87% and will therefore diminish your expected returns by a greater extent than various other bets with lesser win probabilities.

Finally, under all circumstances avoid falling into the trap of reading into patterns that are not there. It is a common sight to see Craps players becoming excited by a shooter throwing a ‘hot streak’ of winning rolls and allowing this to influence their bets, such as deciding that because the shooter has not thrown a seven for 10 rolls, they are less likely to on their next roll.

Remember that for any individual dice throw the chances of getting any specified number doesn’t change. Irrespective of whether the shooter has thrown 10 straight sevens or none in their last 10 rolls, the probability of rolling a seven on the next throw is always 16.66%.

For this reason you should be wary of Craps betting strategies such as the Three Point Molly which are cited as capable of taking advantage of ‘hot streaks’. The odds and probabilities always operate independently of the shooter’s previous rolls, meaning ascribing too much significance to them can be a gateway to losing a large amount of money in a short space of time.

If you’re looking for general advice on how to play Craps, then read our ultimate guide to Craps. If you want to learn more about Craps beyond how to play the game, you can read about the history of Craps.

Pinnacle Sports Casino has a wide range of Craps games for you to enjoy!