There are multiple well-known variants of Baccarat which feature small yet significant changes to the rules and format, and therefore how the game is played. If you ever fancy an alternative to the customary Punto banco version, here is a straightforward guide on how to play some popular variants and the differences you need to remember.

Chemin de fer uses six decks of cards, with players seated in an oval shape and betting on themselves to win. The manner of ascertaining the value of cards and hands is the same as in regular Baccarat.

At the start of the game, one player is designated the banker. For each round, the banker bets the amount they want to risk. The other players then declare in counterclockwise order from the banker whether they will match it, referred to as ‘going bank’ – only one player can do so and if taken, this is the only bet made in the round.

If nobody does, in the same order the players then make their individual bets. If the collective total of the players’ bets is greater than the banker’s, the latter can choose to either increase their own bet to match or remove the excess bets in reverse order to which they were placed.

The banker then deals two cards face down to themselves and two cards face down to the player with the highest individual bet, who plays on behalf of all players. The banker and player then look at their cards; if either or both hands have a natural (value of eight or nine), they must declare this immediately and both hands are then turned up and compared to determine the winner of the round or if there is a tie. 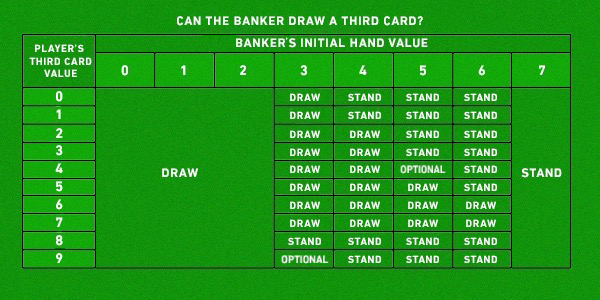 After the player and banker have completed their turns, both hands are turned face up and compared.

If the player wins, each player who placed a bet on the round receives a 1:1 payout, with the banker’s initial bet paying the profit, and the next player counterclockwise assumes the role of the banker. If the banker wins, they collect all the bets placed and remain as banker for the next round. If the round is tied, another round is played with the same roles and bets.

Here are is an example of a Chemin de fer round based on a game featuring four players: 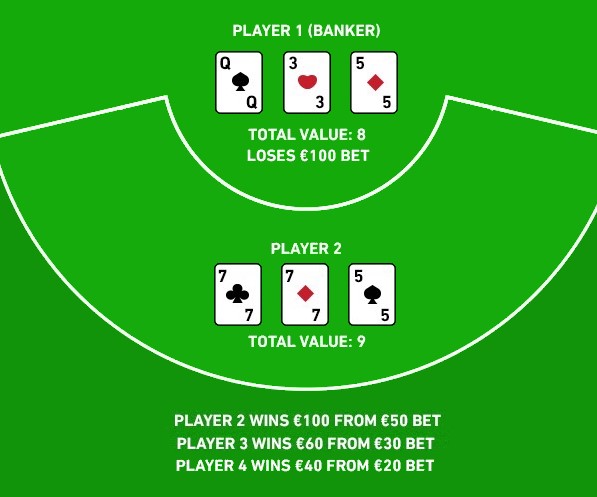 Baccarat Banque uses three decks of cards and players bet on themselves on win. The manner of ascertaining the value of cards and hands is the same as in regular Baccarat.

The role of the banker is essentially put up for auction at the start of the game and given to the player willing to bet the largest amount. The banker sits in the center of the table, with the remaining players sitting in two halves to their left and right. The banker remains in this role until all cards have been played through.

At the start of the round, the players place their bets, starting with the nearest player on the banker’s right, then nearest to their left, followed by the second nearest on their right, and so on alternating in such a manner. Unlike in chemin de fer, the players’ bets are allowed to collectively exceed the bet placed by the banker.

If a player’s side of the table wins the round, they receive a 1:1 payout on their bet. The banker must pay out or take the players’ bets depending on whether they beat or were defeated by the two respective sides of the table.

If the winning bets for a round exceed the amount of money the banker has available, they have two options. They can resign from the game, at which point the winning bets are paid as far as possible in the order they were placed, or they buy in to meet the funds needed, from which point every winning bet must be honoured during their time as banker.

If the banker wishes to resign from their role before their end of their stint, they must state so and the amount they currently have. The role of the banker is then offered to all the other players in the same order which they bet. Any player who wants the role must have at least the same amount as the current banker. The outgoing banker then takes the place previously occupied by their successor.

Here are is an example of a Baccarat Banque round based on a game featuring five players: 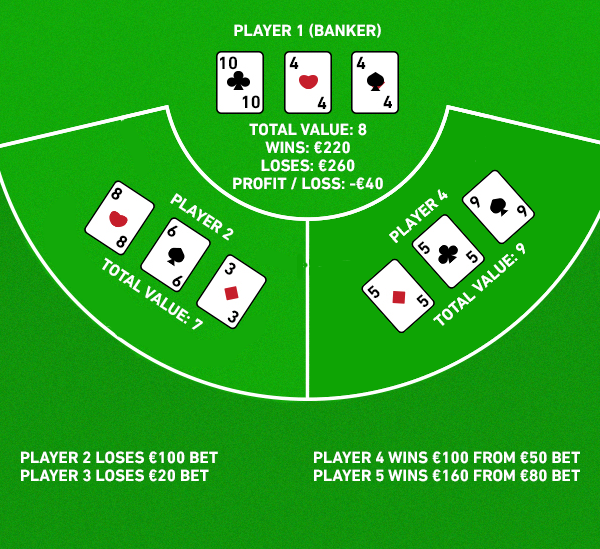 Macao is widely considered a precursor to Baccarat which the game evolved from. It is played with two decks of cards with the players betting on themselves to win. The manner of ascertaining the value of cards and hands is the same as in regular Baccarat.

For each round, players take their turns in clockwise order from the banker. They are dealt one card face down and after they have checked this, they have the option to add a second card dealt face up, and a third card if the second is valued at zero. After every player has taken their turn, the banker does the same before everybody’s hand is revealed.

Here are is an example of a Macao round based on a game featuring four players: 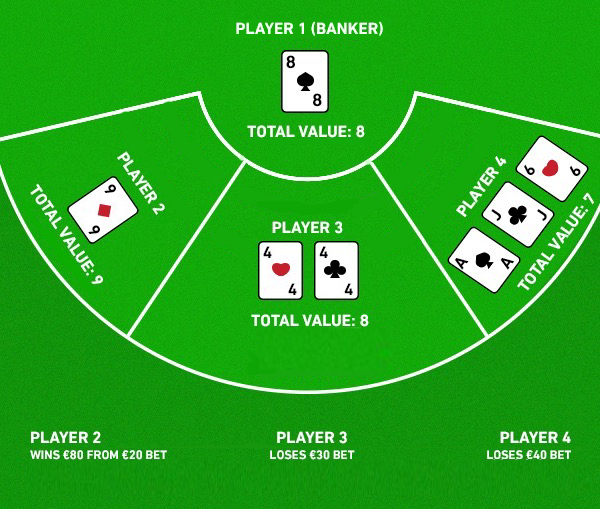 If you’re looking for advice on how to play Baccarat, check out our guide to Baccarat and article on Baccarat side bets. If you’re interested in learning more about Baccarat beyond how to play the game, you can read about the history of Baccarat.

Pinnacle Sports Casino has a wide range of Baccarat games for you to enjoy, including Live Baccarat, 3D Baccarat, Punto Banco and many more!