Is betting on the World Cup favourites a profitable strategy? What can bettors learn from the 2014 World Cup? Why is Pinnacle the sharp bettor's choice? Read on to find out

Every four years the world comes together in a celebration of football when the top 32 teams from 6 federations compete for the right to be crowned the World’s best international team. Arguably it is the greatest single sporting show on Earth.

In the 20 previous World Cups dating back to only 2 continents have won the competition: Europe and South America. Indeed, there have been only eight winners: Brazil, Germany, Italy, Argentina, Uruguay, Spain, France and England.

Whilst Italy will not be competing in Russia in 2018 having failed to qualify, it will come as no surprise that the previous winners are amongst the favourites to win again, as the current World Cup winner odds from Pinnacle show in the table below:

Does this mean that backing favourites generally a better strategy? More significantly, how would that apply to individual matches? This article will investigate.

In recent World Cups there have been a total of 64 matches played: 48 group games where eight groups of four teams play three matches each, followed by eight games, four quarterfinals, two semi-finals, a third-place play-off and the final.

Typically in each there is one favourite and one underdog. It is relatively uncommon for two teams to be exactly equally rated. In a database of 1,152 competitive World Cup games including qualifiers between 2nd September 2011 and 14th June 2017, for just one were the closing Pinnacle odds for both sides the same (D.R. Congo v Cameroon, 16th June 2013).

Previously on Pinnacle’s Betting Resources, I’ve written about the existence of a favourite-longshot bias in football match betting odds, where it appears that the odds on longshots or underdogs are disproportionately shorter (or hold poorer value) than they should be compared to favourites.

Now is not the time to revisit the reasons why this might exist – for those who are interested, you’re welcome to read my original article. Here, though, let’s see how a would have fared backing all 64 match favourites in the 2014 World Cup.

In fact, to $1 level stakes, betting the closing odds for every favourite would have them $6.50, or 10.2% of the $64 turnover. That’s considerably more than that predicted by the size of Pinnacle’s margin for those matches (an average of 1.99%).

In contrast, backing the 64 underdogs would have netted a profit of $0.50, or +0.8% profit over turnover. Not much evidence of a favourite-longshot bias here, it would seem.

Of 64 matches is just a small sample. We should not let ourselves be fooled by the law of small numbers. How do things look if we take a broader picture?

Unfortunately, I don’t have historical Pinnacle match odds for earlier World Cups tournaments. Instead, analysing the database of 1,152 tournament plus qualifying games I referred to earlier, we see a very different and one that is consistent with the existing of the favourite-longshot bias.

We can picture the relative difference in performance of the favourite versus the underdogs by plotting a theoretical time series of our evolving bankroll if we could have bet all these teams consecutively in order of ascending odds, that is to starting with the shortest-priced teams and finishing with the longest.

Broadly speaking, the crossover between favourite and underdog occurs at odds of around 2.7 to 2.8, or a win probability of about 36%. Until we reach that point, backing all the favourites broadly allows us to keep our financial heads above water. Thereafter, it seems we tumble over a financial cliff. 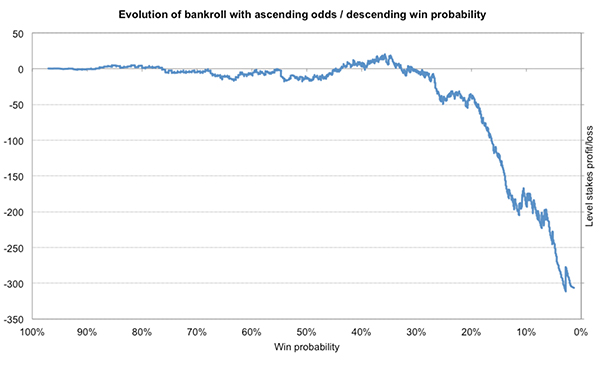 Arguably, however, we could make a similar case as we did before: even a sample of 1,152 matches may not be truly representative of the bigger population. Nevertheless, it is probably a more reliable indicator of expectation than the sample of 64 tournament matches before.

Naturally, none of this is to argue that a bettor should simply back favourites to return a profit. In the longer term, it is likely that even blanket betting of all favourites would hold negative expected value.

How else would a bookmaker be expected to make a profit? And if such a bias was strong enough to make betting favourites consistently profitable, wouldn’t it just get exploited away?

Nevertheless, if one is simply looking to find a way of minimising losses without having to think too long and hard about where the value is to be found in this year’s World Cup matches, the easiest and safest strategy is probably to avoid the underdogs and focus on the favourites.

What is not in doubt, however, is where to find the best value odds at this year’s World Cup, and where you can be sure that you won’t have your account restricted or closed for winning.

Pinnacle Sportsbook offers an unparalleled partnership of the best odds and the freedom to exploit those. I’ve already mentioned that at the last World Cup their average match odds margin was under 2%. It is likely to be as competitive again this summer.

More importantly, however, you’d not be penalised by Pinnacle for doing it, although combined odds of 12.85 , they might start wondering how you did it and offer you a job as a trader.

Furthermore, Pinnacle will offer the best stake limits. For final, they raised it to an eye-watering $1 million.

The World Cup is my favourite sporting and one I look forward to with the same anticipation I did as a child. Being able to bet on the World Cup just adds to that excitement.

However, whenever and however you chose to bet on the World Cup, please do so responsibly, not risk money you cannot afford to lose, and understand that whilst luck can deliver profits in the short term, over the long run almost all people who bet will hold negative expectation.

Get the best 2018 World Cup odds and World Cup betting advice this Summer with Pinnacle.