You need a bit of luck to win the World Cup, but a team of quality players who perform to the best of their ability is also important. Age and experience could be two crucial elements of a successful team and this article explains how important they might be at the 2018 World Cup.

The World Cup is undoubtedly the biggest competition in soccer. The size of the occasion, the fact that national pride is at stake and that teams have to play seven matches in a month to lift the trophy means there is plenty of physical and psychological pressure on the players taking part.

During a World Cup campaign, a player’s age may determine how well they are able to cope with the physical demands while experience could be the key to dealing with the pressure teams will be under to perform (especially as the tournament progresses).

The squads for the 2018 World Cup have arrived in Russia and as with many major international tournaments before, we’ve heard how a lot of them contain “a blend of youth and experience”.

How does age affect performance?

At a basic level, age can tell us when a player is in their physical peak. If a player is too young they won’t have fully developed and might lack the physical attributes to compete with others. Once we get older, our bodies are less efficient with using oxygen and this has a negative impact on endurance, while muscles and joints begin to deteriorate and we become more injury prone.

The table below shows the average age of the 2018 World Cup squads:

Anyone looking to get an edge when betting on the World Cup shouldn’t underestimate any factor that could impact a team’s performance, no matter how small it might be.

Bettors should be aware that looking at the average age of World Cup squads does have its drawbacks. We don’t know which players will actually play the majority of games (the oldest players could feature in the starting XI with the younger players predominately sitting on the bench and vice versa) but more importantly, this doesn’t tell us which teams have the most players at peak age.

There’s been plenty of research into how ageing affects performance in sport and it is widely accepted that the peak age for a sportsperson is around the mid-20’s to early 30’s (for soccer specifically this range reduces slightly to between 24 and 28).

However, the 24 to 28 peak age range in soccer is still generalised and doesn’t account for the physical demands of specific positions. Attacking players will peak sooner and over a shorter period while defensive players and goalkeepers will peak slightly later over an extended period.

The below graphic shows the ages of all members of the squad from the top ten team’s in Pinnacle’s outright World Cup betting market and how many of them fall within the generalised peak age range of 24 to 28. 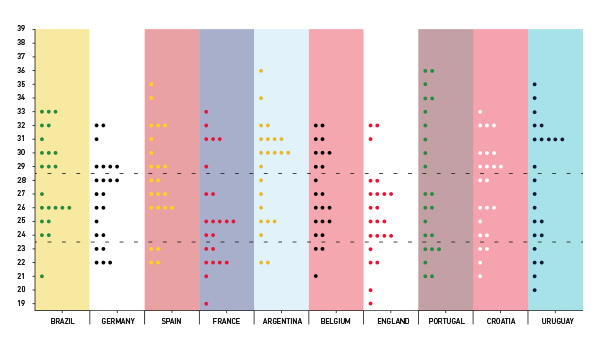 Although the likes of England and Belgium have plenty of peak age players (and Argentina and Portugal very few), some of these players may be inexperienced and struggle to perform at their best during such a major event. This is why it is crucial to have some more experienced squad members.

In various aspects of life, age is often seen as an indicator of experience. While this may be true in some instances, there is a lot more to it when it comes to soccer.

Players are awarded “caps” for representing their country and depending on when the first appearance is made (and how regularly that player plays) there can be some disparity between the age and caps.

The fact that Spain’s Sergio Busquets has over 100 caps before turning 30 and Argentina’s Franco Armani is yet to win a cap at the age of 31 shows a player’s age doesn’t necessarily mean they are experienced in terms of international soccer.

Although we could drill down even further into the question of experience and analyse World Cup experience in particular (number of appearances in the tournament), this would leave us with a much smaller range of data to work with (0-25) as Lothar Matthaeus currently holds the record for World Cup appearances with 25.

Below is a list of the average caps per player in the 2018 World Cup squads:

As with using the average age of the squad, analysing the average caps per player isn’t the most reliable as it looks at all 23 players as opposed to those that will likely spend the most time playing.

How important is age and experience at the World Cup?

Anyone looking to get an edge when betting on the World Cup shouldn’t underestimate any factor that could impact a team’s performance, no matter how small it might be. It is hard to pinpoint exactly how important the age of players and their level of experience will be in Russia, but it is certainly worth considering from a betting perspective.

As is the case with betting on the World Cup in general, the frequency of the tournament and very small sample of data make it a real challenge for bettors to make accurate predictions about what might happen. However, doing as much research as possible considering anything that might be overlooked by others is a great place to start.