If you’re betting on tennis, you will likely start with the competitors taking part when analysing the odds. The court surface will of course come into play, as will the general conditions the match is being played in. But how often do you think about the ball? How important is the ball in tennis? Read on to find out.

The first week of the 2020 French Open (and a fair bit since) was full of discussion from both players and commentators about the tennis balls being used. Not since the Jabulani appeared at the 2010 World Cup has a ball captured so much attention. But why at the 2020 French Open?

Well, in 2019 the French Tennis Federation signed a deal with Wilson, whose balls would replace the Babolat balls previously used at Roland-Garros. Nadal has described the new Wilson ball as being slow and heavy, with Dan Evans going even harder, stating that he wouldn’t even give them to his dog.

Is a new or different ball really such a big deal? Not really. Prior to the French Open’s switch from Babolat, each of the Grand Slams had a different ball supplier. The US Open uses a Wilson, the Australian Open has a Dunlop, and Wimbledon a Slazenger. Generally speaking, a faster ball (like a faster court) will suit a big server or a more aggressive player, with a slower ball better suited to more consistent, defensive players.

What all tennis balls have in common is that their condition deteriorates over time, and are replaced throughout a match. This happens initially after the first seven games (and the warmup) and subsequently every nine games.

When conditions are slower, such as on clay, there are more breaks of serve. My hypothesis is that as the balls progress through these nine-game cycles, players’ service hold percentage will decrease. If the commentators are correct, this could be even more pronounced with this new Wilson ball apparently picking up clay and moisture from the surface, causing them to ‘fluff up’ more than usual.

All games were grouped from 1-9 based on how new the balls were. Group 1 is brand new balls, and Group 9 is the oldest ball, in the last game before they were replaced. I assumed the warmup accounted for two games, so the first game in a match actually falls into Group 3. The second game of a match into Group 4 and so on.

The charts below plot the server’s point win percentage across these nine-game ball cycles. The chart on the left is WTA and the right chart is ATP.

As expected there is a downward trend in service point percentage as the balls age. The effect seems somewhat more consistent and pronounced in the ATP, where the server point percentage is two percentage points lower when the balls are in their last game (9), compared to when they are brand new (1).

How do these raw serve percentage numbers translate to the game winner? The charts below plot the server’s hold percentage across these nine-game cycles. The left chart is WTA and the right chart is ATP.

The trend we found in server point percentages appears to translate to the game winner. We can see there is a distinct drop off in server hold percentage as the ball gets older. If odds aren’t incorporating this data, a potentially profitable strategy may be to back holds with newer balls, and back breaks with older balls (provided that the inefficiency is larger than the margin). Next, let’s slice the data to consider each grand slam individually. 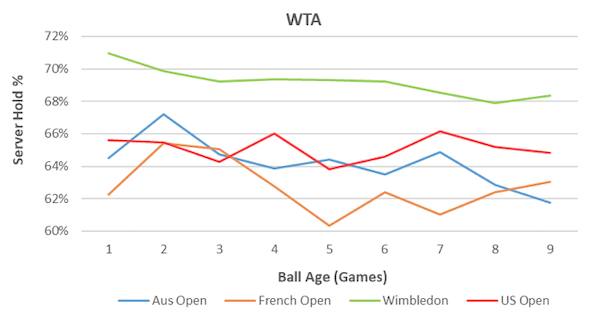 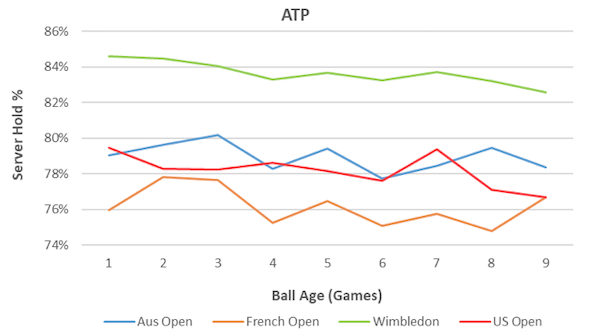 This ageing ball effect appears most pronounced at Wimbledon. With new balls at Wimbledon the server holds in 84.6% of games compared to 82.6% when the balls are in their ninth and final game. In WTA matches the drop in server hold percentage with old balls is highest at Wimbledon and the Australian Open. A 2.5 percentage point difference at both tournaments. While the French Open seems less affected by the deterioration in the balls, it will be interesting to update this analysis to see if the new Wilson balls change things for the 2020 tournament.

Other popular live tennis betting markets include the game score and whether the game will go to Deuce. Following the same reasoning as above, I would expect that the proportion of games won to love (four points to zero) would decrease as the balls age, and the proportion going to deuce (a game of eight points or more) would increase as the balls get older. What does the data tell us?

The occurrence of winning a game to Love does tend to decrease as the balls age, and the likelihood of a game going to Deuce increases somewhat, as expected. The effect seems more pronounced for winning a game to Love, which drops by around one percentage point in both WTA and ATP matches.

The data from eight years of Grand Slams indicates that ageing balls do have an affect on serve and hold percentages. The magnitude is somewhere in the order of 1-2 percentage points for both. While this may seem relatively insignificant, in betting markets that are becoming increasingly efficient, a percent or two will often be the difference between getting your money in behind and having an edge.

It’s unclear whether bookmaker’s live tennis models incorporate the age of the balls, and even if they don’t, the inefficiency may not be large enough to overcome their margin. In any case, incorporating potentially unique data and insights into your model will drive it in the right direction, and improve the accuracy of your predictions.

The ageing balls effect appears most evident at Wimbledon, where the serve plays a more prevalent role in determining the outcome of each point due to the speed of the surface. It is least apparent at the French Open, though if the players and commentators are to be believed, this may change due to the new balls used in 2020.