The unique scoring system in tennis makes it a great sport for betting, both pre-game and in-play. While the winner of a match must win more sets than their opponent, they may lose more games and/or points. The entire WTA calendar, and the majority of ATP matches are contested over Best of three sets. This article examines odds and statistics for the first and second sets of best of three set matches from 2010 to August 2018.

Since 2010 there have been over 18,000 ATP, and over 20,000 WTA three set matches. We analysed the 50 top ranked ATP and WTA players to determine who is effective at closing out matches in straight sets, and who is good at reversing momentum to win the second set after losing the first.

In a previous article I showed that Pinnacle’s match winner closing prices are highly efficient, meaning they’re a great indication of true probabilities. The winner of the first set is also a widely available and liquid betting option, and so the relationship between winning the first set and winning the match is an important one to understand. The charts below plot the relationship for different match winner implied probability ranges. 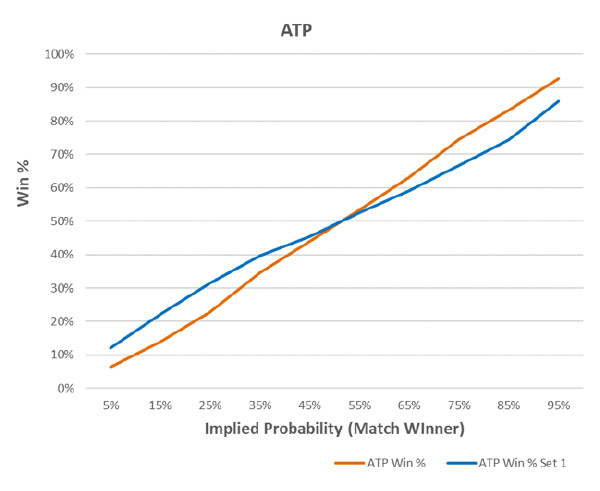 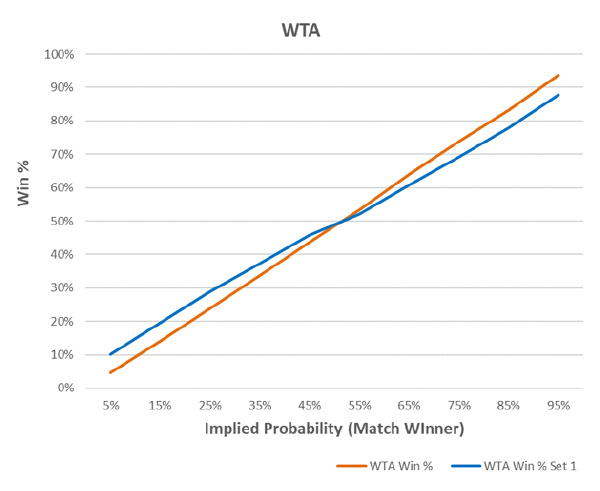 A survey of Pinnacle’s set one markets suggests that this discrepancy may not always be accounted for in their odds. Match winner to set one winner correlations appear to be similar for both ATP and WTA matches. This may mean backing underdogs to win set one is more profitable in ATP matches compared to the WTA.

Players significantly above (below) the orange line win the first set more (less) than their odds may suggest, on average. For example, Kyrgios has an average match winner implied probability of 65% (average odds of 1.55) and wins the first set in 67% of matches, above the ATP average of 59% for that implied probability. This means he has likely been a good betting prospect to win Set one over the course of his career. 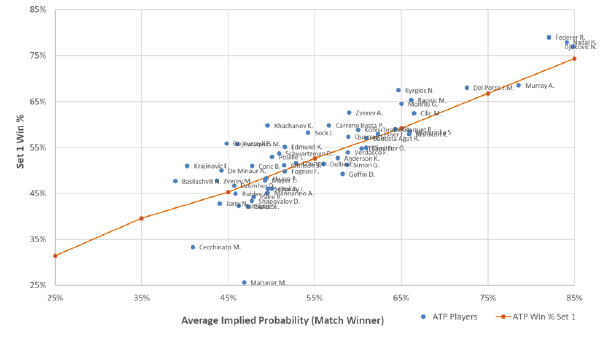 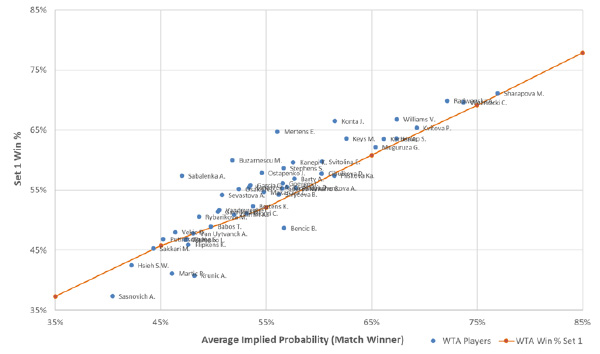 The completion of the first set provides an opportunity for in-play bettors to identify possible mispricings for set two and the match. The charts below add set two win percentages, in green, to those above. 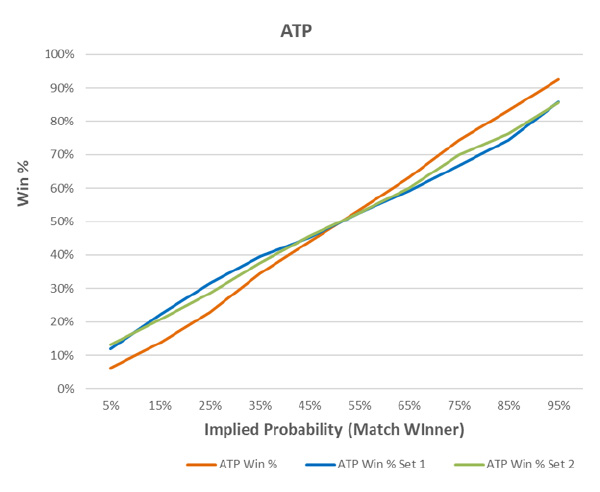 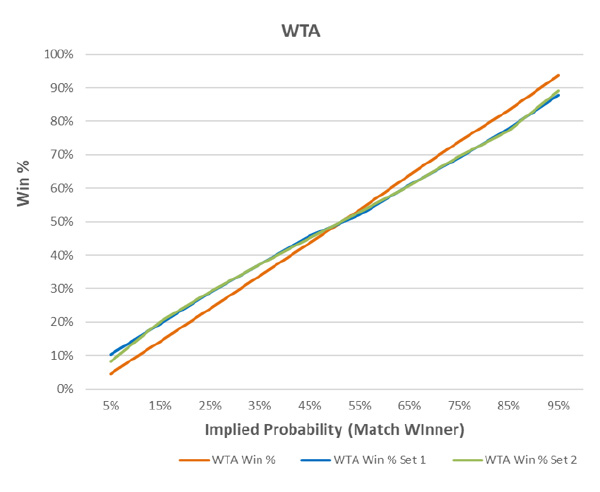 In ATP matches, players with an implied probability less than 10% (odds greater than 10.0) perform better in set two than set one. This is somewhat counterintuitive, as we may expect the effort of a big underdog to decrease as the match progresses.

This drop off actually appears to happen for underdogs with match implied probabilities between 20% and 40% (odds between 2.5 and 5.0). In this range, set two win percentages are around two percentage points lower than set one. In WTA matches, performance in set one and set two is similar across all odds ranges. 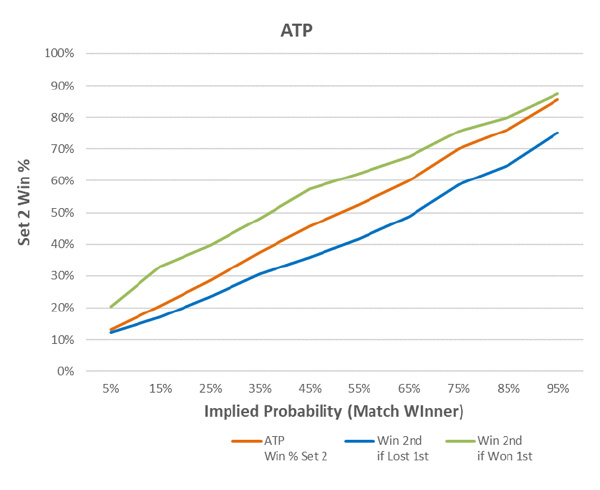 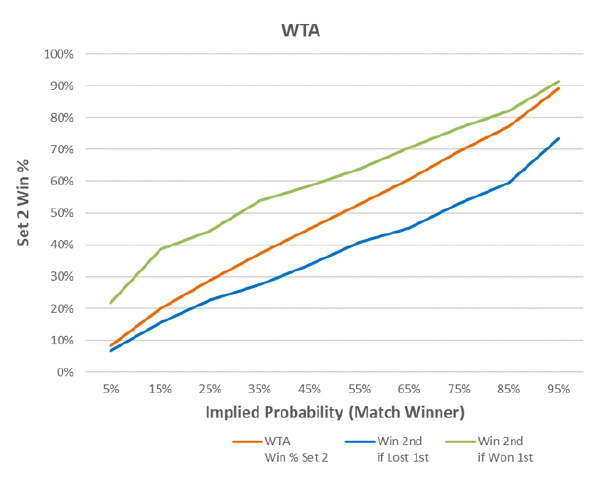 As we might expect, the win percentages for set two are higher when a player has won the first set, demonstrating the effect on momentum in tennis. The gap between green and blue lines for WTA matches is on average six percentage points larger, suggesting momentum is greater in WTA matches.

Another interesting finding is that when a big ATP underdog (odds greater than 10.0) loses the first set, they still win the second set in 12.2% of matches. This is actually higher than how often they win the first set (12.0%). Betting on big ATP underdogs to win set two, may therefore be more profitable than backing them to win set one. This is especially true when they have lost the first set, as odds on the favourite would likely have shortened for set two in-play. So which players may provide good betting prospects for set two at the completion of the set one?

The next charts plot players’ set two win percentage when they have won the first set. Players significantly above the average orange line are good frontrunners, winning in straight sets (after winning the first set) more often than average, at their respective odds.

Such players include (ATP) Tsitsipas, Chardy, Gasquet, Del Potro, Bautista Agut and Coric. In WTA matches, the majority of the current top 50 are good frontrunners. Those with the best front-running record relative to their odds are Osaka, Sasnovich, Krunic, Sakkari and Strycova. 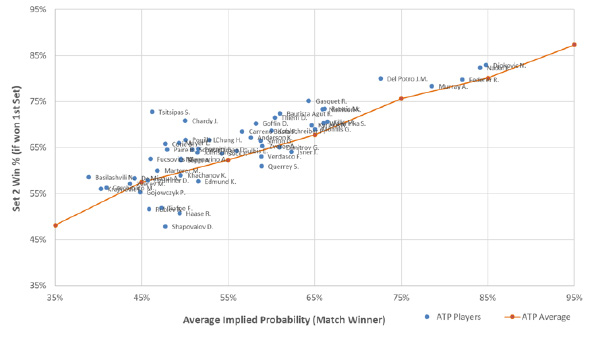 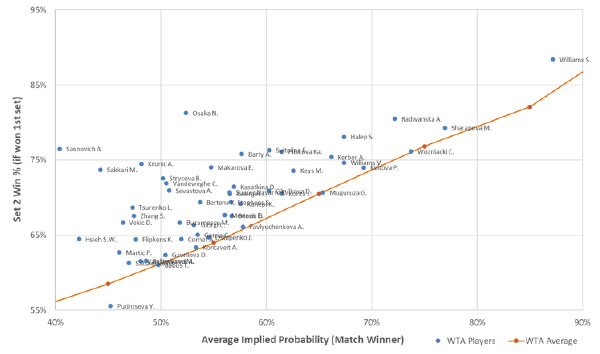 Players below the average orange line such as (ATP) Shapovalov, Haase, Tiafoe and Rublev have been poor at finishing their matches in straight sets after winning the first set. For example, when Shapovalov (who has an average match winner implied probability of 48%) wins the first set, he only wins the second set in 48% of matches. ATP averages are significantly higher, around 59%. In the WTA, Putintseva is the worst front-runner in the top 50, losing the second set in 44% of matches when she has won the first set.

Reversing the momentum in a match when trailing is a valuable trait for a tennis player. In the charts below I plot players’ set two win percentage when they have lost the first set. Which players are good at winning the second set from a set down? 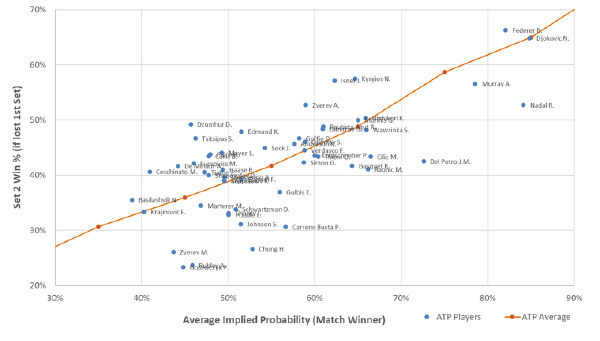 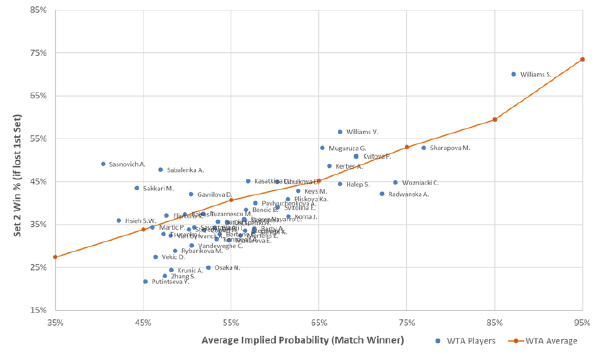 Relative to their odds, players above the orange line have performed better than average in set two after losing the first set. They include (ATP) Dzumhur, Isner, Kyrgios, Tsitsipas, Edmund, Zverev A, (WTA) Sasnovich, Sabalenka, Sakkari, Muguruza and Williams V. Players sitting below the line have been relatively poor at coming back from a set down.

Players such as (ATP) Gojowczyk, Rublev, Chung, Carreno Busta, Del Potro, Nadal, (WTA) Putintseva, Zhang, Krunic, Osaka and Radwanska appear to be the worst at mounting a comeback from a set down to force a third set.

While the analysis in this article doesn’t account for a number of factors such as weather, court conditions, motivation and injuries that will have an impact on odds throughout a match, an understanding of market and player statistics is valuable knowledge when considering a wager before or during a tennis match.

Pinnacle’s high limits and policy of welcoming winners ensures that a profitable betting angle remains exploitable to any bettor for as long as it exists.