In part one of this article I analysed market and player statistics in the first two sets of best of three set tennis matches, highlighting players that were good pre-match betting prospects for Set one, and in-play for Set two depending if they had won or lost the first set. 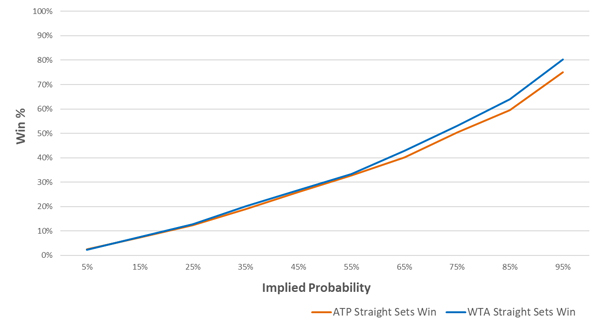 Serena Williams has the highest straight sets win percentage at 74%, considerably above her peers which should be expected given her average implied win probability of 87%. The only other WTA players above 50% are Radwanska (57%), Sharapova (57%) and Wozniacki (54%). 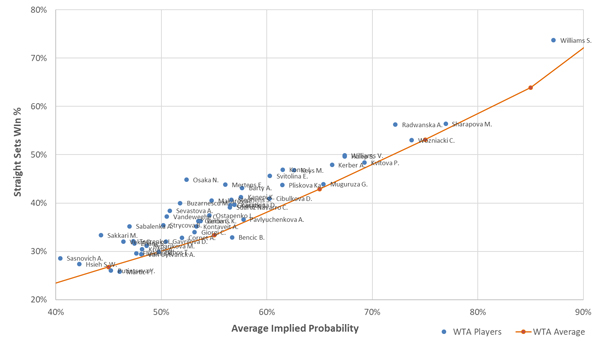 Players that win in straight sets more often than average given their odds include Federer, Del Potro, Kyrgios, Busta, Fucsovics in the ATP.

For the WTA players Williams, Osaka, Mertens and Buzarnescu have won more often in straight sets than the odds imply.

Since 2010, 35.8% of ATP matches and 32.7% of WTA matches since 2010 have gone to 3 sets. Recall that in Part one of this article I demonstrated the effect of momentum by showing that the winner of set one was more likely to win set two.

Does this momentum effect also play out in set three? Is the winner of set two more likely to win set three? Consider the charts below that plot set three win percentages conditional on who won the set one and two. 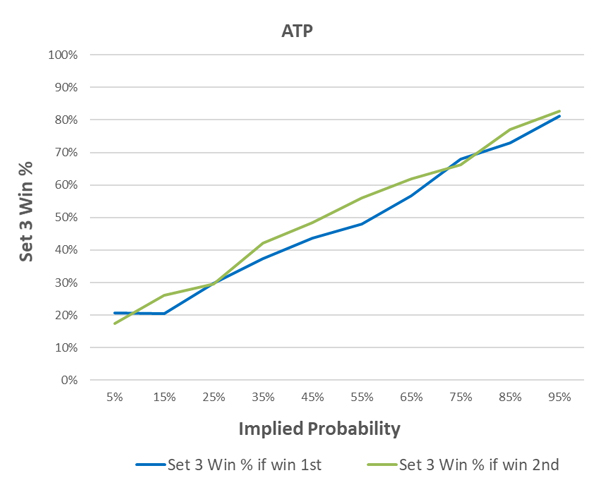 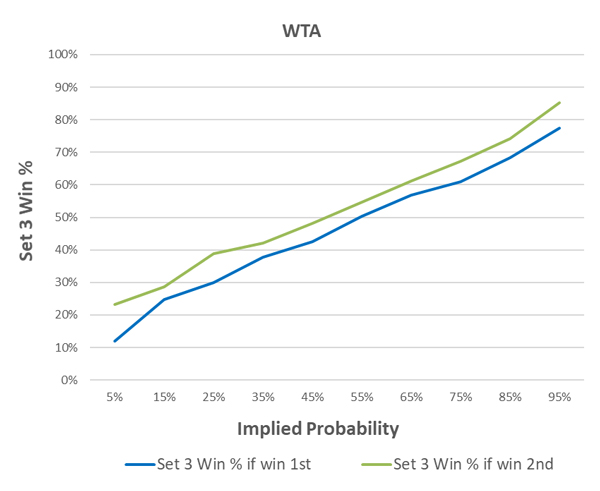 Understanding which players are likely to perform better or worse than how the market may expect in a certain period of a match may assist a bettor when contemplating an in-play tennis bet.

Knowing how often a player ends up playing a third set may be useful when contemplating handicap and totals bets. The charts below plot players’ 3 Set match percentage against their average odds implied win probability.

For example, Dzumhur has an average match win implied probability of 46% (average odds of 2.19) and 46% of his matches are 3 setters. The orange lines represent the ATP/ WTA averages for that implied probability range. Players above the line compete in 3 set matches more than average given their odds, and players below the line, less so. 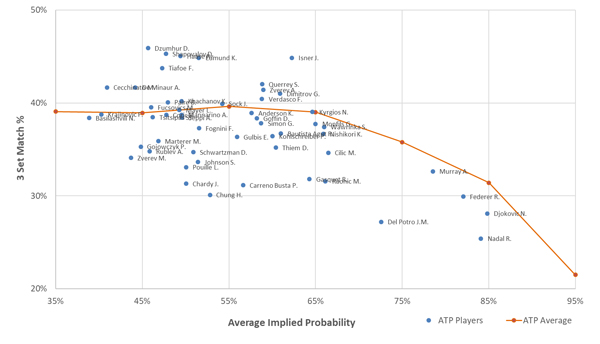 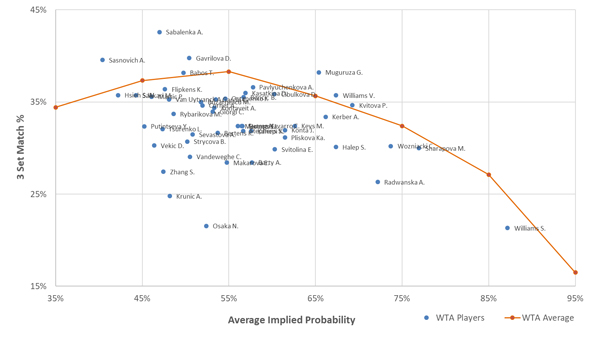 Players that end up in three set matches more than average include: Dzumhur, Shapovalov, Edmund, Haase, Tiafoe and Isner in the ATP and Sabalenka, Gavrilova, Sasnovich and Muguruza in the WTA.

Below I plot players’ Set three Win percentage against their average match winner implied probability in three set matches. The orange line represents the ATP/ WTA average. Players significantly above the line have a set three record that is better than what would be expected given their odds, and vice versa. 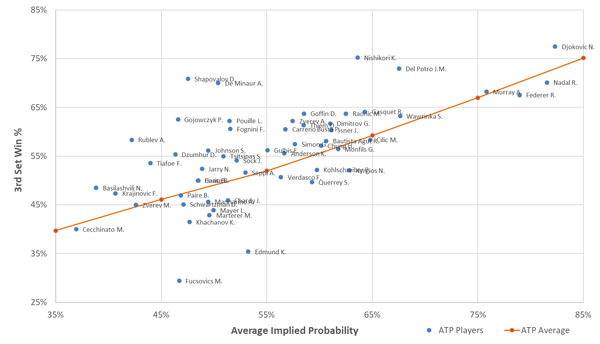 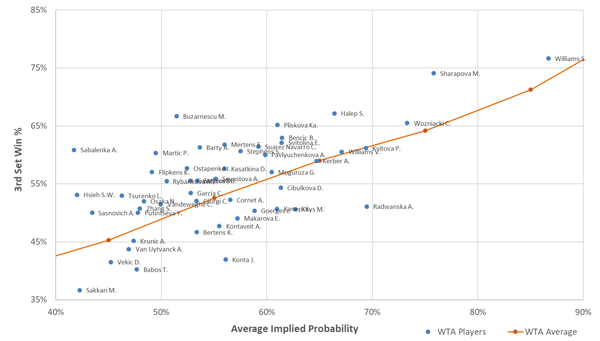 Win percentage from a set down

Given the strong momentum effect in tennis, the ability to recover from losing the first set to win the match is a highly valuable trait for a player.  Serena Williams, again, has the best record here, winning 60% of matches after losing set one. Djokovic, at 47%, has the best ATP record.

Relative to their odds, players that win more often than average from a set down include Jarry, De Minaur, Zverev, Tsitsipas, Nishikori (ATP), Serena Williams, Sabalenka, Buzarnecu and Sasnovich (WTA).

Players that are poor at winning from a set down include: Nadal, Edmund, Mischa Zverev, Raonic (ATP), Radwanska, Makarova, Konta and Putintseva (WTA). 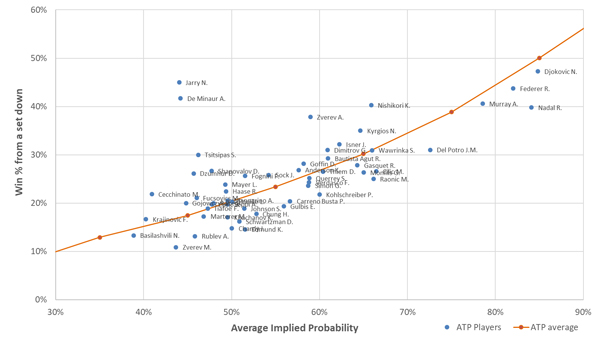 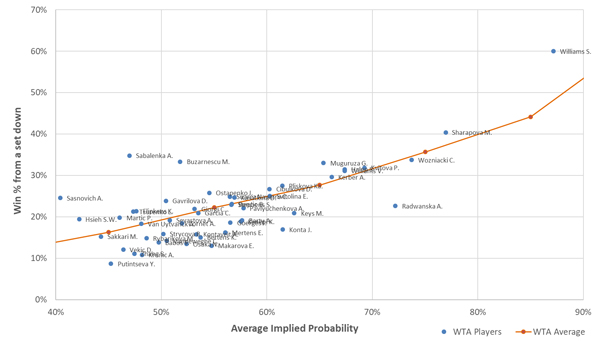 Win percentage from a set up

Finally, I analyse which players are good frontrunners, going on to win the match after winning set one. The ATP average is 81%, and the WTA average is 83%. Serena Williams (96%) and Djokovic (97%) again have the highest win percentage from a set up.

Players that win more than average from a set up at their respective odds include Basilashvilli, Shapovalov, Pouille, Goffin, Coric (ATP), Sasnovich, Strycova, Osaka and Barty (WTA). Players that are relatively poor from a set up include: Cecchinato, Jarry, Fucsovics, Marterer (ATP), Van Uytvanck and Konta (WTA). 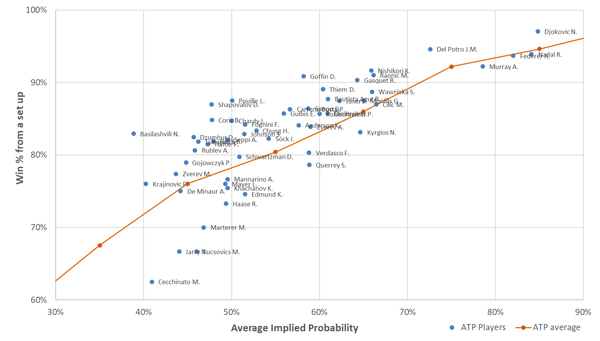 It is worth noting that winner odds are not the only variable considered by bookmakers when setting total and handicap markets. Player’s expected service and hold percentages will shift odds away from averages considerably for some players.

Big servers, for example, will have higher totals and will be expected to play more 3 set matches. As such, the analysis presented in this article should not form the basis of a betting strategy on its own, however when considered in conjunction with prevailing prices could be a useful adjunct when contemplating a tennis bet.