In this article Monte Carlo simulations are used to analyse the probability and odds relationships behind a number of popular tennis betting markets. Serve and return efficiency of the top ATP players will be used to assess game, set and match winners.

Similar to other sports with point-based scoring, the path to victory for any tennis player is known. Points win games, which win sets, which win matches.

If we price points, we can price games, sets and ultimately matches. Understanding the probabilistic relationship between these is important when betting on tennis.

A tennis game is won by the player who is first to four points, with a margin of two. If we know the probability that a player will win each point, we can determine the probability, and thus the fair odds, of winning a game. 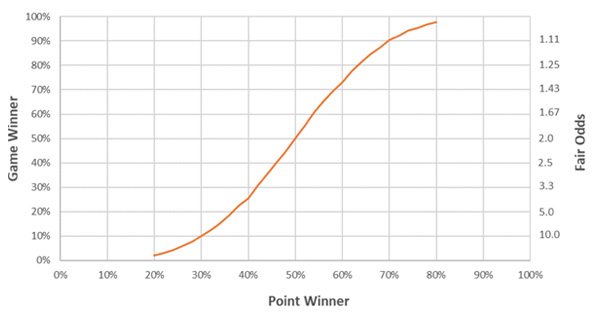 If we think of the point winner probability as a serve percentage, the game winner % becomes a service hold %. For example, if Kyrgios wins 70% of points when serving, he should win around 90% of his service games. Odds greater than 1.11 for him to win a service game may therefore be value.

The chart below graphs this relationship, holding one player’s serve percentage constant, at 50% (orange) and 60% (blue). Again, I used 10,000 simulations to estimate set winner probabilities. 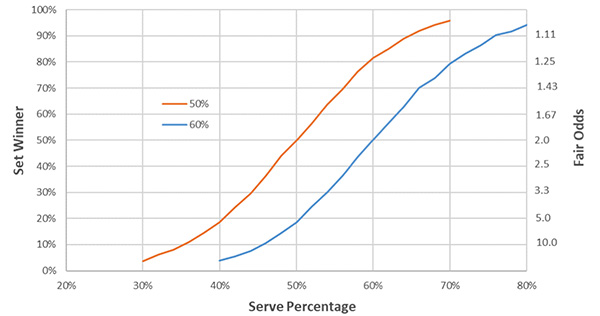 That the lines are remarkably parallel shows that it is the difference between serve percentages that is they key to pricing set winner odds. A player who has a service percentage 10 percentage points higher than their opponent can expect to win around 80% of sets (fair odds 1.25).

Using the same simulation technique, the chart below plots match winner probabilities. The simulations reveal a similar curve, with a steeper gradient. When a player wins 4% more points on serve than their opponent, they can expect to win the match around 70% of the time. The fair odds for this player would be 1.43. 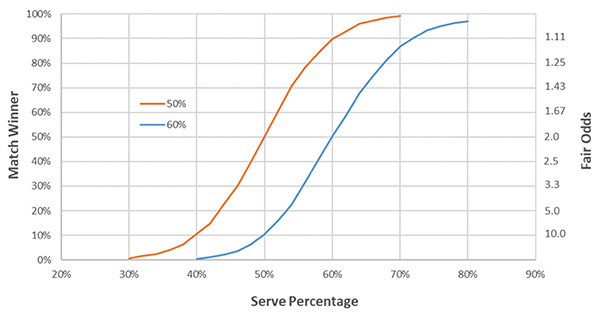 The relationship between the difference in the two players’ serve percentages and their chance of winning the match is shown in the chart below (estimated using the above simulations) for both set and match winner.

For example, a player would be expected to win 76% of sets and 83% of matches when their serve percentage is 8 percentage points higher than their opponents. 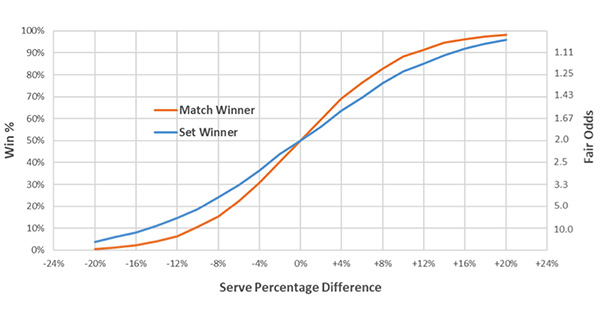 How else can we interpret this chart? If a player has odds of 5.0 to win a match (set), and you believe that they will perform better than winning 7% (10%) less points on serve than their opponent then their match (set) odds may offer value.

Alternatively, if you think a player will win more than 4% more service points than their opponent, odds greater than 1.55 and 1.43 for a set or match respectively may offer value. This is because they are expected to win 65% of sets and 70% of matches with this differential.

In ATP matches, the server wins around 64% of service points and wins 78% of service games, on average. In all matches since 2010, the top 50 players’ serve percentage ranges from 72% (Isner, Raonic and Federer) to 60% (Basilashvili). Return percentages range from 44% (Djokovic) to 30% (Isner).

Players sitting below the trend line are generally more efficient servers and above will be better returners. Consider Federer. On average he wins 12% more service points and 20% more service games than his opponent.

For a similar average serve percentage difference, Nadal (+12%) and Djokovic (+13%) have a significantly bigger advantage in hold differential (+23% and +24% respectively). They are slightly less efficient on serve, and slightly more efficient when returning. 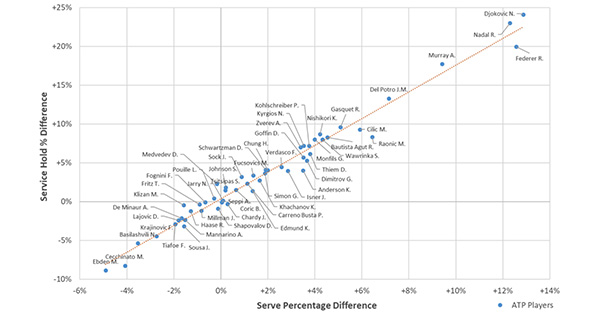 While winning a higher percentage of service points and games will go a long way to winning a match, given tennis’ unique scoring system, the timing of points won within a match is also very important. If we compare the average difference in serve percentage to match results, we can see which players are efficient at converting points won into match wins.

The orange line plots the match winner simulation from above. If tennis matches were played in excel, this is where we would expect all players to plot. But not all tennis points are equal. Winning a point at 30-30 or 30-40 is arguably more valuable than winning a point at 0-40. Consider Kyrgios, Goffin and Anderson.

All three players average +4% serve percentage but Kyrgios has won 67% of his matches, considerably more than both Goffin (59%) and Anderson (57%).

Is Kyrgios better on big points? Does he take the foot off the pedal in games and sets when he’s either a long way ahead or behind? Or has he had more luck? You could likely make a case for all three.

Let’s consider the effect variation in performance may have had on their results. The chart below plots the frequency of the three players’ serve and return percentages. 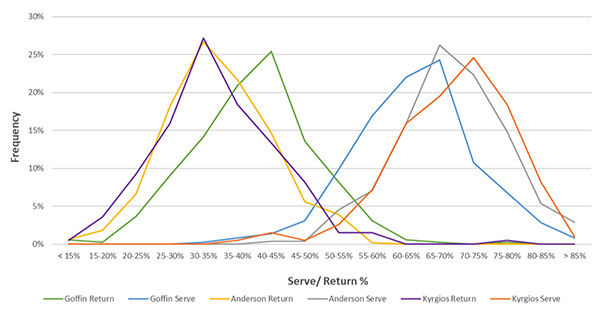 This may suggest an unpredictability in performance has served Kyrgios well. While the reason for this variation may only be known by Kyrgios himself, it could result from increased risk taking or greater concentration on big points.

In so far as bookmaker tennis odds are likely always priced from serve percentages, understanding this method, as well as the consequent relationships between point, game, set, and match winner probabilities, is valuable for a tennis bettor.

In a previous article I showed the effect of momentum between sets in tennis. Adding a momentum factor would allow this model to be extended to more accurately price game totals and handicaps, as well as in-play odds. Keep an eye out for this in a future article.