It’s common knowledge that the surface of a tennis court will have an impact on how a player performs. However, while bettors will already likely consider what it does to a player, they also need to be wary of what it does to the market itself. Do favourites or underdogs offer more value on grass? Read on to find out.

Across the ATP and WTA, just 14 of the 126 tournaments scheduled for 2018 are contested on grass courts. Compared to the 75 and 37 tournaments on hard and clay respectively, the grass court swing is by far the shortest.

Is the market adept at pricing matches over this short grass court season? This article explores if of grass court tennis is well understood and whether favourites or underdogs provide better betting opportunities for bettors on this surface.

How do underdogs fare on grass?

When we compare Pinnacle’s odds implied expectations and match win percentages on grass for players with odds over 10.00 (implied probability less than 10%), their odds appear to be well calibrated. Pricing suggests we should expect 6.4% of these players to win, of which 5.8% (ATP) and 6.3% (WTA) do so. 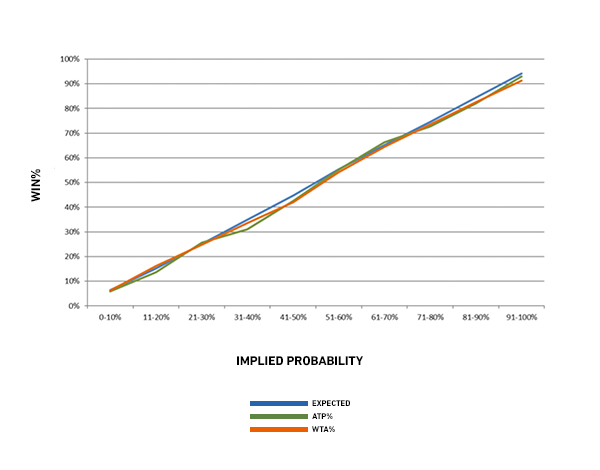 Betting a fixed amount on every grass court player

The highest return (27.4%) would have been generated by betting on all ATP players with odds greater than 10.00. This is despite the actual win percentage being lower than the average win percentage implied by the odds. So what’s going on here?

Wimbledon is the only grass court tournament with a 128 player draw, meaning the early rounds will often throw up lopsided contests, but equally, opportunities for some big upsets.

Since 2010 there have been four grass court matches where underdogs won having odds greater than 30.00. They all occurred at Wimbledon and were all ATP matches. The biggest priced WTA upset was Larcher De Brito (24.52) beating Sharapova in the second round in 2013.

Wins by underdogs at greater than 30.00

That all the big recent grass court upsets have occurred at Wimbledon is no surprise really. It is the only grass court tournament with a 128 player draw, meaning the early rounds will often throw up lopsided contests, but equally, opportunities for some big upsets.

Wimbledon has seemingly become famous for them. From Nadal being knocked out by Rosol (41.00) and Darcis (34.00) in consecutive years, to Federer losing to Stakhovsky (46.00) in 2013, and Serena Williams falling to Lisicki (10.25) in the same year, some of the biggest tennis upsets in recent memory have occurred at the All England Club.

The tournament has also seen some big longshots go all the way. Who could forget Ivanisevic’s 2001 triumph as a wildcard or Sharapova winning in 2004 as a 17-year-old?

In this decade underdogs have won 21.7% of ATP and 26.9% of WTA matches at Wimbledon, more or less in line with the other Grand Slams. The tournament does have a higher proportion of big ATP upsets , with 4.6% of players with odds over 10.00 winning.

WTA Grand Slam matches consistently produce more upsets than ATP matches. This can be partially explained by the fact that they are contested over best of three compared to best of five sets. The shorter the match, the more variance in the result. Over a best of five set , an ATP underdog is less likely to maintain a level required to beat a more fancied player.

Betting on big upsets at Wimbledon

Betting on big underdogs at Wimbledon

A strategy of betting on all ATP players with odds greater than 10.00 would have yielded a return of just under 20% from 175 bets. The same strategy at the other three Grand Slams would have resulted in a significant loss, at an average of -48%. In WTA matches, betting on 10.00+ underdogs was a similarly poor strategy, except at the French Open where a return of 39% would have been generated from 111 bets.

A comparison of Wimbledon match win percentages with probabilities implied from player odds may reveal other potential odds biases. We can see in the chart below that Pinnacle’s Wimbledon prices are generally accurate across all odds ranges. 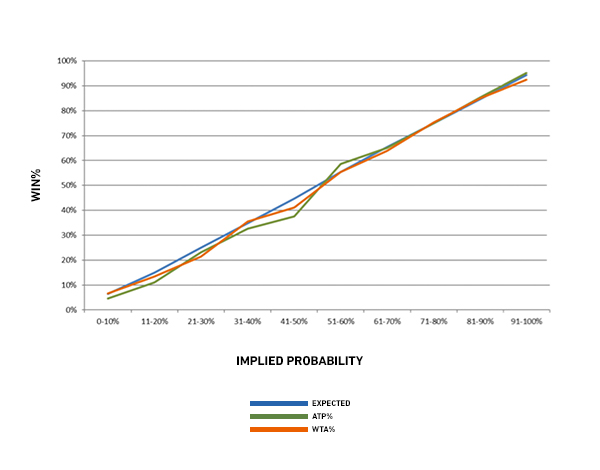 For two closely matched ATP players, the market appears to correctly identify the favourite but doesn’t price them as short as they should be. A strategy of betting on all Wimbledon favourites with odds between 1.67 and 1.95 (51%-60% implied probability) would have returned a profit of 6.0% since 2010.

This article has shown that despite only comprising a small slice of the tennis calendar, grass court matches are generally reasonably well priced. The two biases uncovered are that betting on 10.00+ ATP underdogs and slight ATP favourites at Wimbledon have been profitable strategies since 2010. While these trends may or may not continue, Pinnacle’s low margins mean that there may often be considerable value in the prices of these players throughout The Championships.