An important component of tennis betting is understanding the difference between the three-set matches that take place at regular ATP Tour events and the five-set matches contested at Grand Slams. In the second of a two-part series, Dan Weston analyses the variances between the two and how this can impact player performance and therefore, betting on tennis.

Do top players perform better against each other at Grand Slams?

In the previous article, it was ascertained that the current ATP top ten players had a higher implied win percentage based on closing prices for their opening round match at Grand Slam tournaments than at other ATP events. All ten players in the group managed this feat, underlining the fact that the format of Grand Slams is stacked in favour of the top players, particularly in the early rounds.

There is a perception that top players try to peak their form for Grand Slam events.

It was also established that matches become more competitive in the latter stages of Grand Slams as they are more likely to feature two high quality opponents and thus a lesser gap in ability between the two players.

With this in mind, it is important to assess the differences in player data between the two tournament formats. Analysing the performance of the current ATP top ten in matches against top 20 opposition from the start of 2019 onwards highlighted several interesting takeaways.

Across the entire sample, when playing against top 20 opposition the ATP top ten held their serve 79.7% of the time and broke the opponent’s serve 20.7% of the time (a combined return of 100.4%) at Grand Slam tournaments.

However, this combined hold/break figure rose to 103.2% (82.4% hold and 20.8% break) at other ATP events. While the break opponent percentage was virtually identical in both formats, the top ten were able to hold their serve almost 3% more against top 20 opposition in regular three-set matches on the ATP Tour than at Grand Slams.

This stat can arguably be rated as surprising, considering the perception that top players try to peak their form for Grand Slam events. The idea of peaking for a Grand Slam is logical, largely due to the financial rewards and ranking points available at these prestigious tournaments. However, as highlighted, collectively the top players do not seem to follow this trend. 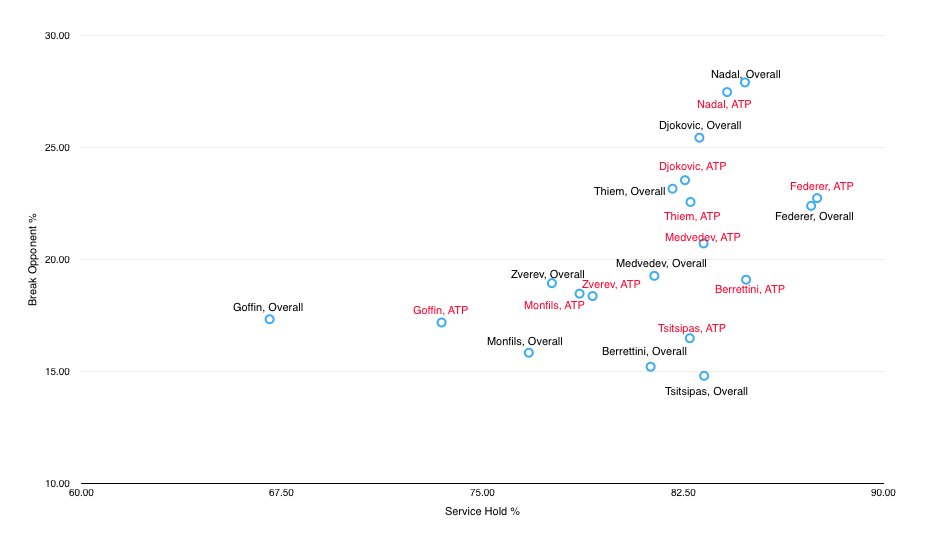 The chart above highlights the hold/break data for each top ten player against top 20 opposition during the same period, split between three-set ATP events and overall performance factoring in both these and five-set Grand Slam events.

In addition to Goffin, the likes of Alexander Zverev, Gael Monfils, Matteo Berrettini and Stefanos Tsitsipas have all struggled to break top 20 opposition more than 20% of the time. This is likely to serve as a formidable barrier to any potential likelihood of Grand Slam success.

A consistent strong ability to break top opponents is a factor that has historically pointed towards Grand Slam success, while it is also likely that if a player is unable to break opponents more than average, they will be involved in tighter sets and matches.

As a result, they will be required to win numerous key points to enjoy success in multiple matches over a short period of time. The difficulty of this task is exacerbated by the fact that tighter sets and matches are often longer and therefore contribute more greatly to accumulated fatigue – something that all players should be looking to avoid amidst the prospect of playing seven five-set matches in two weeks.

Do the very best players perform better at Grand Slams?

The other (and perhaps more important) observation is that both world number one Novak Djokovic and number two Rafa Nadal – the most dominant players in the world in recent years – are the only players who can boast better overall data than their isolated ATP data.

The data suggests that top ten players should perhaps look to replicate the schedules of Djokovic, Federer and Nadal.

By definition, this would mean that they performed better in Grand Slam events against top 20 opposition than they did in regular ATP events against the same ranking bracket.

Establishing why this is the case is not straightforward, although one theory worth strongly speculating on is that they are more efficient at managing their schedules than most of the other top ten players.

With the exception of Roger Federer, both Djokovic and Nadal enter far fewer tournaments below the Masters 1000 level than the rest of the top ten, and are therefore probably better positioned to be in fresher physical condition in advance of a Grand Slam event. If any players in this group actively look to peak for a Grand Slam, it would be them.

Federer is also an interesting case, as his ATP and overall data returned similar numbers and he is also very pragmatic with regards to the number of tournaments he enters. However, his hold and break numbers are still slightly down against top 20 opponents at Grand Slams compared to ATP events, and perhaps the physically arduous five-set Grand Slam format proves challenging for the 38-year-old.

With all of this elite trio now aged in their thirties, soon an opportunity should arise for other players in the top ten to take advantage of any decline in their performance levels. It would be reasonable to assert that one lesson that the other top ten players can take from this analysis is that they should perhaps look to replicate the schedule of these three tennis legends.

From a betting perspective, until an obvious statistical decline from any of these three players emerges, looking for value bets on them against other top ten players at Grand Slam events would appear to be a sensible approach. With the exception of Dominic Thiem, the remaining ATP top ten players are simply unable to match their performance data against high-level opposition.

If you haven't already, you can read the first part of this series in which Dan analysed the structural differences between Grand Slam tournaments and ATP events and the impact of mismatches at the former.
BR Home
See the latest tennis odds