http://www.pinnacle.com/en/betting-articles/Tennis/Betting-liquidity-problems/F2GJQJ54B9WPYA3U
Limited liquidity is a major problem for exchange tennis bettors in the early rounds of the Australian Open. We explore why Betfair’s tennis liquidity is so poor, and how Pinnacle offers a much better option for tennis bettors.

Internet forums are awash with theories as to why liquidity may be lower for the Australian Open, with suggestions falling into two categories: event specific issues and general changes to exchange betting conditions.

Betfair is by far the dominant betting exchange in terms of volume with its customer base skewed towards the United Kingdom. With many Australian Open games played between 1am and 5am GMT it’s almost certain that available liquidity is impacted by the unfavourable timing for Betfair’s core player base. This is particularly acute for those bettors interested in betting in-play, on peripheral courts and on games without star appeal.

On top of the time zone issue, television coverage in the UK of the Australian Open is the patchiest of all the Grand Slams, with neither of the main broadcasters – BBC or Sky – showing early round games live. With exchanges, there is a direct correlation between live coverage of an event and volume/liquidity.

To make matters worse, Betfair also has a special arrangement with Australian betting regulators, which requires customers betting on events taking place Down Under to transfer funds to a specific Australian Wallet. This impractical step may also be enough to put off some bettors.

Alongside the event specific issues, discussions around declining exchange liquidity are a daily feature on forums and are relevant for the Australian Open problem. The following points are structural issues that many bettors feel are impacting liquidity:

In 2008 Betfair introduced a Premium Charge on bettors whose winnings were deemed to be disproportionately high, when compared to the amount of commission they pay. In 2011 this was as high 60%, and these draconian measures are seen by many as the root cause of drops in liquidity. Big players may be mitigating their exposure to the Premium Charge by reducing the amount of backing and laying that they do, which depletes the available action in markets.

While liquidity appears to be declining on exchanges, it’s going in the opposite direction at Pinnacle.

One of the main online betting forum threads that often re-occurs, is the suggestion that a lot of so-called ‘market-makers’ have reduced or stopped their activity. This is especially relevant for the peripheral games in the early rounds of the Australian Open where the lack of liquidity has been so noticeable.

While liquidity appears to be declining on exchanges like Betfair, it is going in the opposite direction at Pinnacle.

In theory, an exchange should offer a free market for betting on any given event, and free market economics suggest that the odds should quickly move to a ‘true value’ position. Backers and layers both seek optimal returns so the differential between the two should diminish, and this should produce close to a 100% market – one with no margin.

If there is enough volume and the market is efficient, this may be true. But unfortunately for successful exchange bettors, they are then slapped with commission on winnings which can be as high as 7%. Unfortunately for Australian Open bettors, this commission still applies even when the market is inefficient, such as when there is a lack of volume.

And on top of the reduction in value that poor liquidity brings, this situation also restricts what should be one of the greatest attractions of exchanges: the freedom to hedge positions to lock in profit. Without the money on offer, bettors are either forced to take whatever odds are on offer, or sit on their hands.

Declining tennis liquidity – Not at Pinnacle

While liquidity appears to be declining on exchanges like Betfair, it's going in the opposite direction at Pinnacle. We have a long-standing reputation for offering the highest fixed odds limits online, and as bettors can re-bet at the maximum limit, this presents almost unlimited potential liquidity and the ability to build positions.

Higher limits aren’t the only reason Pinnacle are a much better option for tennis bettors than an exchange; our margins are far lower after commission is factored in, so we offer far better value, providing a better chance to win more. This is especially true for tennis with margins as low as 2%.

Unlike exchanges, there is no sting in the tail at Pinnacle as we do not levy any commission or charges on successful players, nor do we close or limit the accounts of successful players; our high volume/low margin business model needs sharp players.

So if you are looking for better tennis liquidity for the Australian Open, free of commission and Premium Charge, Pinnacle is the place for you. 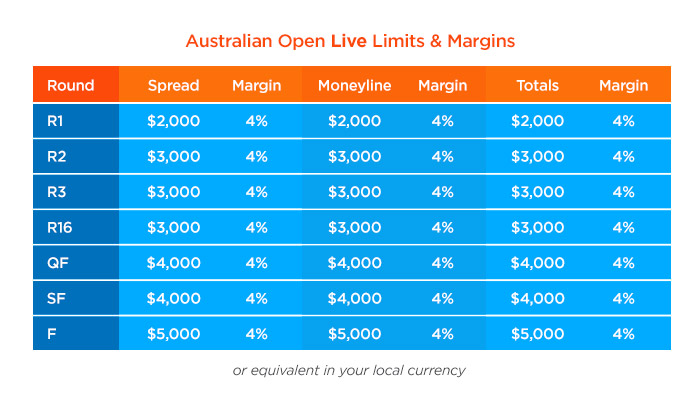