With many of the world’s top WTA players getting some final court time at the Eastbourne Premier warm-up event, there are still some uncertainties for bettors in advance of Wimbledon, which starts next week. Dan Weston is back to analyse the main contenders in the outright Wimbledon betting. Read on for some expert insight.

Jelena Ostapenko’s shock French Open triumph shows how difficult it is to predict the women’s tour currently is. You only have to look as far as Pinnacle’s WTA Wimbledon betting market - where 16 players are currently priced below 50.00 to win outright* - to see the challenge bettors face.

While it is fair to suggest that in recent years the ATP Tour has always had a bigger discrepancy between the elite players and the rest, it would also be reasonable to argue that the ladies singles playing field has rarely been at its current level.

While motivation from top players is more guaranteed in Grand Slams than smaller events, this match duration difference doesn’t always manifest itself in match pricing.

This is further exacerbated by the fact that, at Grand Slams, women players play the best of three set matches, and the men, best of five. The general effect of this is that the longer format tends to favour the ‘better’ player, while the ladies event has the same dynamics as a regular Tour event.

While motivation from top players is more guaranteed in Grand Slams than smaller events, this match duration difference doesn’t always manifest itself in match pricing - the top WTA players are frequently priced prohibitively short, as if their victory is extremely straightforward.

This would almost certainly be a mistake in the coming fortnight, given that the WTA Tour - unpredictable at the best of times - is as open as ever, and many players are capable of beating their opponents on any given day.

As with the men’s event, grass tends to benefit strong servers, with 69.8% of service games held on the WTA Tour on grass in the last three years. The Wimbledon mean hold percentage was identical to this number (the ATP was just 0.5% out) and again, this illustrates that conditions are anticipated to be medium-paced for grass, but extremely fast compared to all other surfaces.

A close call for favouritism

The outright market certainly favours those with a strong serve, with Petra Kvitova and Karolina Pliskova heading the field, at 5.390* and 5.840* respectively. With favourites at this pricing level, it seems a long time ago that Serena Williams was being chalked up at odds-on for virtually every Grand Slam event.

Pliskova clearly has plenty of ability on the surface - as evidenced by her holding serve an impressive 82.1% on grass in the last two years.

Having only recently returned from injury, questions will be raised over Kvitova’s ability to reach her past performance levels on what is undoubtedly her favourite surface. I have previewed the Czech’s chances in detail in a previous article for anyone looking for a more in-depth assessment of what bettors can expect following her return after a six-month layoff.

Fellow favourite Pliskova certainly has all the tools required to be a success on grass, although incredibly, she is yet to progress past the second round at SW19. Last year’s straight-set defeat to Misaki Doi was the World number three’s latest disappointment.

However, Pliskova did make the final of two grass warm-up events last year, winning in Nottingham (and also made the final two years ago in Birmingham). She clearly has plenty of ability on the surface - as evidenced by her holding serve an impressive 82.1% on grass in the last two years. Bettors must decide whether the big-serving Czech’s poor record at Wimbledon is variance, or something deeper.

Can Venus Williams get back to her best?

Venus Williams, at 8.170*, is the other player priced in single figures and while the evergreen 37-year-old has a seemingly impressive 20-8 record in 2017 with a combined hold/break percentage of 110.6%, it is worth noting that her quality of opponent this year has been far from spectacular.

At the Australian Open, the older Williams sister did not face a top-25 player en route to the final before being beaten by her sister Serena. In the 28 matches she has played this year, the five-time Wimbledon Champion has played a mere six top-20 opponents, winning on three occasions. It is far from inconceivable that her statistics are flattered by such mediocre opponent quality.

Furthermore, Williams has decided not to play a grass warm-up event and is pretty much only playing Grand Slam and Premier events this year. It would be a huge leap of faith to back the veteran at such a short price to win her first Wimbledon title since 2008.

Williams’ price could possibly have something to do with the lack of market belief in most of the other leading contenders.

Is there value elsewhere?

French Open champion Ostapenko, runner-up Simona Halep, Garbine Muguruza, Johanna Konta, Angelique Kerber and Coco Vandeweghe are all priced between 11.600 and 18.910, and the chances of all of these six players are up for debate.

Ostapenko and Halep have vastly differing issues from their match in the final at Roland Garros. The Latvian youngster, Ostapenko, must now deal with the huge expectation and attention surrounding her. In addition to this, her grass record is far from impressive and it would take a huge increase in the grass level exhibited so far in her career for her to win a second Grand Slam title in a row.

The big-serving Vandeweghe, who has an excellent grass record compared to other surfaces will definitely benefit from conditions at this year's Wimbledon.

The vanquished Halep, who threw away a dominant leading position in that final needs to refocus her attention on winning a maiden Grand Slam title - something that her ability level on a currently weak WTA Tour deserves.

Her performances in this week’s warm-up event at Eastbourne will give some indication as to Halep’s mental state, and her record over the last few years on grass is impressive, with combined hold/break stats around the 120% mark.

Garbine Muguruza cannot boast nearly such a level on grass, despite a Wimbledon final in 2015. The Spaniard, who does her best work on clay, is a mere 21-13 in her career on grass.

Last week’s defeat to Ash Barty in Birmingham will not inspire bettors with confidence, and it’s worth noting that if it wasn’t for Vandeweghe’s ankle injury, she may not have even had the opportunity to face Barty.

The big-serving Vandeweghe, who has an excellent grass record compared to other surfaces will definitely benefit from conditions - it is the doubt surrounding her fitness that makes the market quite guarded. Her performances in the early rounds will give bettors a good idea of her level.

Remaining from these second-tier contenders are Konta and Kerber, and both have a strong record on grass despite being out of form. Konta, rather predictably, endured a woeful clay season and was shocked by Donna Vekic in the final of Nottingham several weeks ago; before being routed by Vandeweghe in Birmingham.

Other outsiders with a chance

Other players worthy of consideration at bigger prices include Victoria Azarenka (21.44*), who returned to the tour from pregnancy last week in Mallorca, where she underwhelmed.  However, if the Belarussian can quickly recapture her level, she will be a real contender, and there is little doubt that she is the unseeded opponent each player will be keen to avoid in Friday’s draw, along with the impressive Barty.

Anett Kontaveit won the grass warm-up event in Hertogenbosch several weeks ago - she is currently priced at 23.360* and will be worth keeping an eye on.

Madison Keys (29.01*) and Elina Svitolina (32.80*) are another two that stand out in WTA Wimbledon betting - perhaps for the wrong reasons. Keys is lacking form this year, while Svitolina has an unimpressive record on grass.  The strong-serving Kristina Mladenovic, currently 32.80*, may represent a better value than both Keys and Svitolina.

Finally, some of the players who have been in and around the top 10 for a number of years are priced around the 50.00 mark. Agnieszka Radwanska has endured a torrid 2017, and looks bereft of confidence, not to mention a poor record against top ten opponents, while Caroline Wozniacki may have a chance in an open draw.  Dominika Cibulkova has underwhelmed throughout her career on grass and it would be a lot to ask of her to reverse this at 28 years of age.

Need help more help before betting on Wimbledon? Read our in-depth guide and learn how to bet on tennis.

If you want to ask tennis betting experts and tennis taders any questions, take part in our next Discussion Day! 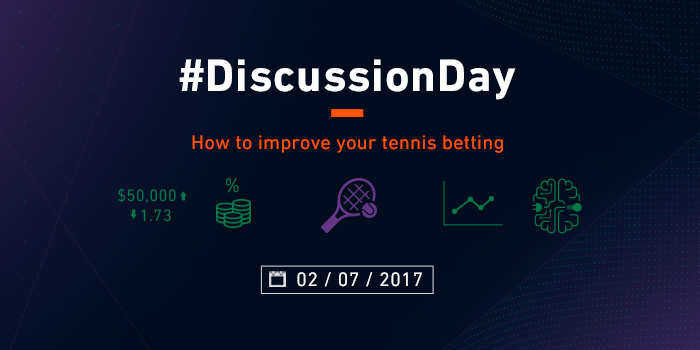