http://www.pinnacle.com/en/betting-articles/Specials/who-will-be-the-next-us-president/E9X29DB3XCV549DT
The time has come. The presidential debates are over. The next president of the United States will be decided in an election that has been branded as the "unpopularity contest". What do the betting odds suggest? Easy win for Clinton or yet another underdog triumph for Trump? We present you the with, the US election 2016 in betting numbers.

The longest odds of presidential candidates

During the 2008 and 2012 elections, Obama faced McCain and Mitt Romney respectively in his quest for the US Presidency. During both clashes, the Pinnacle politics market saw the Democratic winner’s odds only marginally above even money at its longest.

The 2016 US election is painting a different picture this time around. With Clinton (currently priced at 1.20*) and Trump (5.11*) being the least popular presidential candidates in the history of American politics, the Democrat candidate has only seen her odds going as high as 1.667 before tracing back, while Trump’s price has reached the dizzy highs of 6.91. Given his outlandish victory of the GOP though, you should ignore Trump at your own peril.

The Republican nomination more unpredictable than ever

When the billionaire real estate developer announced his candidacy for president on June 16, 2015, with a speech at Trump Tower in NY City, political experts who saw his run as a joke rather than a plausible scenario reality initially mocked him. Bettors followed suit. With the Pinnacle odds opening at 7.74, the market implied a probability as low as 12.92% for Trump to win the Republican race.

Several controversies and odds fluctuations later, in May 2016 the Republicans along with the rest of the world woke up to the once unthinkable Trump’s victory and plenty of questions as to the new reality of American politics.

Betting on politics more popular than ever

Betting on politics has attracted a huge interest among bettors in the last eight years. Between 2008 and 2016, betting volume on the US election at Pinnacle increased by 290 times!

The million-dollar question, however, continues to be how good are the online betting markets at predicting political events. During the Brexit referendum, online bookmakers had heavily favoured Britain remaining in the EU, only to be proven wrong. 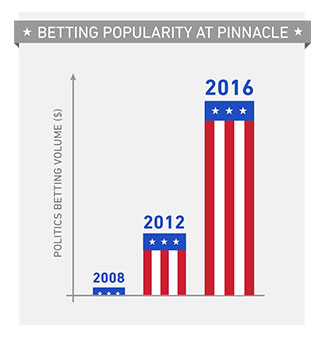 The role of social media in the elections

Back in 2008, Facebook was in its infancy and far less popular than today, with MySpace being the predominant social medium among those who were interested in connecting online. That was not the case for the Republican candidate who let the opportunity pass, while  accomplished unprecedented levels of online engagement. In the digital arena, Obama amassed about 1,500,000 friends as opposed to only 203,00 for McCain, with the presidential election in 2008 going down in history as “The Facebook Election”.

Four years later, social media became an integral part of gauging presidential election trends. During the second presidential debate between Obama and Mitt Romney, the Republican candidate set the Internet ablaze with his remark about how he tried to onboard more women on his campaign. The infamous comment “I went to a number of women’s groups and they brought us whole binders full of women” went viral, with a Facebook page dubbed ‘Binders Full of Women” amassing over 200,000 likes. The phrase also became a trending topic on Twitter as well as the third fastest-rising search on Google during the debate.

However, it wasn’t until 2016 that social media was used as a tool to determine who won the presidential debates. The third debate between the least popular candidates of all time in the American history was the most tweeted about political moment in Twitter’s history. Despite national polls largely favouring Clinton and Trump’s constant sniffling, the Republican outsider dominated the digital platform with 62% twitter mentions focused on him.

Get the best US Politics odds at Pinnacle, the ultimate bookmaker with the highest limits and the lowest margins.