The US Presidential Election race is ramping up as we approach election day on November 3. Read on for a timeline of Pinnacle’s odds movements, which will be updated throughout the remainder of the campaign. Who will win the 2020 presidential election?

Presedential election predictions: about the chart

The chart below shows the implied probability of each candidate winning the election, based upon the last price taken at Pinnacle on each day of the race.

Pinnacle’s odds are highly efficient when it comes to sports betting, but political betting can add additional complexities which may make reflecting the true probabilities accurately through odds more complex.

Chance of winning the 2020 Presidential Election (%) 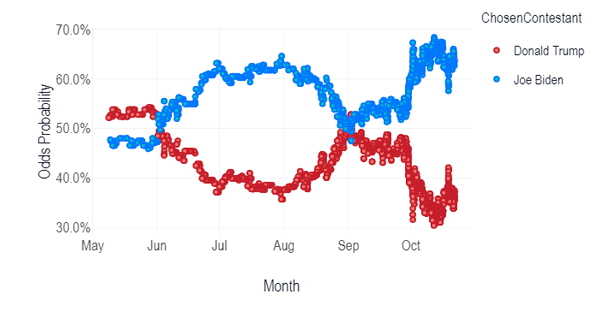 Biden sweeps Democratic primaries to become all but assured of the Democratic nomination. Trump sweeps the Republican primaries but it is Biden that takes the initial lead in the race, according to the betting odds.

Trump holds his first public rally since the onset of the COVID-19. Trump claimed that “almost one million” people would be in attendance. The Tulsa fire department estimated the actual attendance as 6200. Fox News state that the rally drew its highest Saturday primetime viewership in history.

Biden’s probability continues to increase, reaching a greater than 60% implied chance of winning the election by the end of June, which holds steady through July.

August is a month of recovery for Trump with the mail-in vote controversy possibly being a contributing factor to a slight increase in his implied win probability towards the middle of the month.

The incumbent President surged in implied win chance towards the end of August, coinciding with the Republican convention. He then  briefly overtakes Biden, reaching a high of 54% chance of winning the election, on September 1.

This aligns with polling from Emerson College released on August 31, which showed that Biden’s lead over Trump had closed to within margin of error.

A CNN poll shows that there was no post-convention bounce for Trump as Biden quickly regains his favourite status in the betting market.

Biden’s lead widens as states begin to send out absentee ballots to voters. Counties in North Carolina are first to move with ballots mailed out a full six weeks before the official start of general election voting in the state.

By mid-September Biden has a 55% chance of winning the election.

The betting odds make Biden the winner of the first debate, held on September 29. The challenger moved from a 55% chance of becoming the next president on the day before the debate to a 60% chance by the end of the 29th.

On the day following the debate President Trump and the First Lady test positive for COVID-19.

Biden then takes a commanding lead, hitting a 69% chance of winning the election by the end of October 1 - his highest percentage chance in the race to that point.

Biden maintains this advantage during the rest of October. By mid-October Donald Trump has around a 35% chance of winning a second term.

get the latest us election updates

Trump briefly clawed back some ground on October 19 as the candidates approached the final debate but Biden's win probability had recovered by the time they took to the podiums. The aftermath of the debate saw minimal odds movement with the Democrat's lead holding steady at a win probability in the 64-66% range.

Why does the US election betting market differ from the polls? Marco Blume's thoughts

"The thing that makes this market so intriguing is that if you read any analysis based on polls, Biden should be an 80%+ favourite. Yet looking at the activity at Pinnacle, all people are interested in is taking Trump at his price of 2.76*."

"Whether it’s that people don’t like to publicly support Trump or that the polls are more likely to be weighted towards Democrats, I don’t know. What I do know is that we’re taking huge amounts of money on Trump and in terms of the bets, we’re looking at the complete opposite of the market with around {70%} on Trump."

"This is definitely a unique market in terms of what we’ve seen so far, but in a weird way it reminds me of the Mayweather vs. McGregor fight a few years back. Everything was pointing to a Mayweather win, yet all people wanted to do was bet McGregor – we gave him a 20% chance when it probably should have been less than 10%. We all know what happened then, will it be the same here and Biden turns out to be the bet of the decade? I really don’t know."

Get the latest US presidential election odds throughout the campaign with Pinnacle. If you found this article interesting then visit Betting Resources for more betting content.