http://www.pinnacle.com/en/betting-articles/Specials/the-us-2016-presidential-candidates-race/W6326NDNX4YSJ3AX
Things are heating up in the US political scene, and from the long list of candidates running for presidency a clear consensus in the Pinnacle’ US Election betting market is starting to emerge. Find out who the odds suggest will be taking up residence in the White House this November.

Following the results of Super Tuesday on 1st March, the nomination race for both the Democratic and the Republican field has narrowed down with a Trump-Clinton head-to-head looking more probable than ever.

With both candidates having a U.S. senator standing in their way - Sanders for the Democrats and Cruz on the Republicans side - and with party voters increasingly willing to send them into the battle for the White House, here’s what the Pinnacle’ odds suggest for the chances of Clinton and Trump to become the next US President.

Former secretary of state and first lady, Hillary Clinton, announced her bid for the White House in April 2015 ending two years of speculation and marking the beginning of one of the least contested races for the Democratic presidential nomination.

Around 23 years since she entered the White House as first lady, and only eight years since she lost a humiliating battle for the Democratic nomination to Barack Obama, Mrs Clinton is back to run for the title her husband held from 1993-2001.

Since July 2015 Clinton has been consistently leading the Pinnacle’ odds for the next US President. Despite being severely criticized for her involvement in a number of scandals, culminating in the Beghazi hearing that shot her odds of winning the US presidency as high as 2.560, the odds shortened back to 1.641 at the beginning of 2016 ahead of the primary elections. 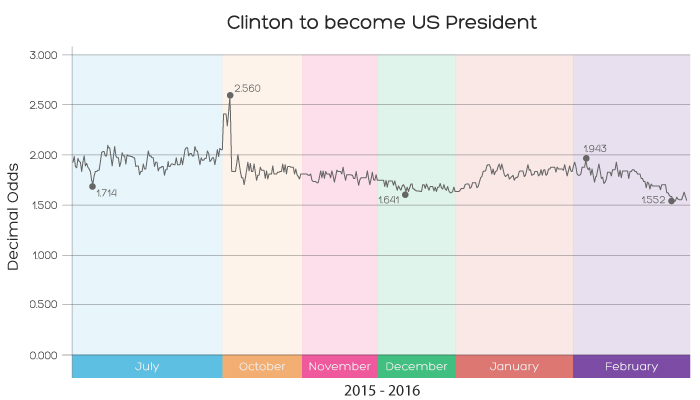 In a way, Clinton is exactly where the Democrats expected her to be; one step away from the nomination she was denied by Obama eight years ago. At 1.390* at the time of writing, the Pinnacle Sport’s odds are favouring Clinton to win the battle for the White House in November.

Things are less clear for Trump though. The real-estate mogul, who entered the political scene in August and was widely expected to be a political “has been” sooner rather than later, owes his successful run of results both to the fractured nature of the Republican field as well as his determination to tap into the mood of anger at large in the US.

Despite the fact that the majority of public opinion polls showed him to be the favourite to win the GOP nomination since he first announced his candidacy, the odds only followed suit at the beginning of the years, with Trump consistently leading the Republican nomination market since mid-January.

Despite shortening from 1.562 on 1st March to 1.909* at the moment of writing, he is still seen as the most viable opponent to Clinton, despite fierce internal opposition.

Bettors have shown great uncertainty in Trump’s capacity to win the general elections with the odds fluctuating from as low as 2.270 a week ahead of the Iowa primary to 6.60 following the chaotic Republican debate that took place after the New Hampshire primary. 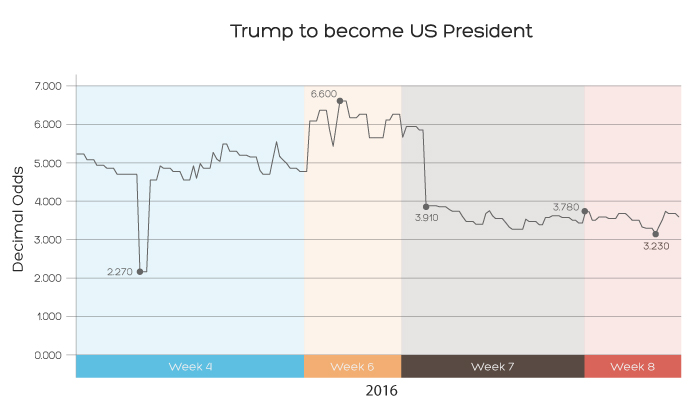 Trump vs. Clinton: The final showdown

Looking further down the road to a potential head-to-head with Clinton, the odds are suggesting that the path to the GOP nomination is not as rosy for the New York businessman as suggested by the results of the first three primaries.

Trump is fighting both outside and inside forces to establish himself as a viable Presidential candidate against a long time political stalwart.

As the reality of Trump leading the Grand Old Party this fall started to sink in following the Super Tuesday results on 1st March, Republican lawmakers started to air their anxieties about running on the same ticket as the unpredictable billionaire businessman.

From Mitt Romney’s anti-Trump speech to American Future Fund’s -  a conservative non-profit group – allegations of having been scammed by Trump, the opposition seems to have delivered a blow to Trump’s powerful allure, with the Pinnacle Sport’s odds for Trump to win the US Presidential elections having shot up to 6.350* at the time of writing, which can be seen as valuable hedging opportunity.

While there is still a mathematical chance that Trump and Clinton can be caught, the Pinnacle’ odds are suggesting that voters in November’s general election will be faced with a difficult electoral choice: the first woman president with an abundance of corruption scandals swirling around her name or a brash businessman who defies  “politics-as-usual” and promises to make America great again.

Things look hard for Trump, but if you accept the possibility of a reality star leading the Grand Old Party, then dismiss his general election chances at your own peril.

Get into the betting action with the best 2016 U.S. Presidential Election outright odds online at Pinnacle.