http://www.pinnacle.com/en/betting-articles/Specials/donald-trump-gop-nominations-betting-odds/W4HJWDWPGAMUF4LY
Trump’s surprise defeat to Ted Cruz in the Iowa caucuses was followed by a resounding victory in New Hampshire, re-establishing the real-estate mogul at the head of the race. What are his chances of winning the GOP nomination? Here’s what the betting odds have to say.

The aim of the primary and caucus races starting in Iowa and finishing in Columbia in June is to determine which candidates will stand for the two main parties in the November 2016 elections for US President.

With Iowa and New Hampshire having cast their vote on the GOP nominee, the moment of truth for the highly controversial Republican nomination race has arrived.

Ted Cruz, the conservative senator from Texas, managed a surprising come-from-behind victory against the New York businessman in Iowa, causing him to drift to the second place in the betting markets for winning the GOP race.

Following the Iowa vote, the contest suggested a three-man war between Trump Cruz and Rubio, but that was only until New Hampshire went to polls. The “second place or bust” tactic paid off for Kasisch, the Ohio governor, who is now back in the game.

It takes 1,237 delegates to win the GOP nomination.

Having been widely expected to be a political “has been” by now, Trump entered 2016 topping the field with 39%, according to the CNN/ORC poll of Republican and Republican-leaning registered voters.

Trumps does politics his way; by ridiculing a woman’s appearance, disputing the heroism of America’s best-known Vientnam-era POW, calling Iowa voters “idiots” and boycotting a Republican debate less than a week before the Iowa voting, thus making himself the most denounced candidate.

Despite dispensing with conventional virtues in an unprecedented way, the real estate mogul made it all the way to the GOP nomination race strongly supported by the public opinion.

A forerunner to Donald Trump

No one knows how the motor-mouthed mogul got so far. A quick look back to 1940 offers an interesting insight to this question, when a man, now largely forgotten, came out of nowhere to take the GOP nomination out of the party’s customary leadership.

Utility executive, Wendell Willkie, capitalised on fears about the international situation by achieving the victory of the Republican nomination, passing down in American history as the first businessman candidate to win a nomination.

Is the same scenario possible for Donald Trump? It worked for his predecessor and a look at the Pinnacle’ odds for winning the GOP nomination implies that it could work for Trump too. 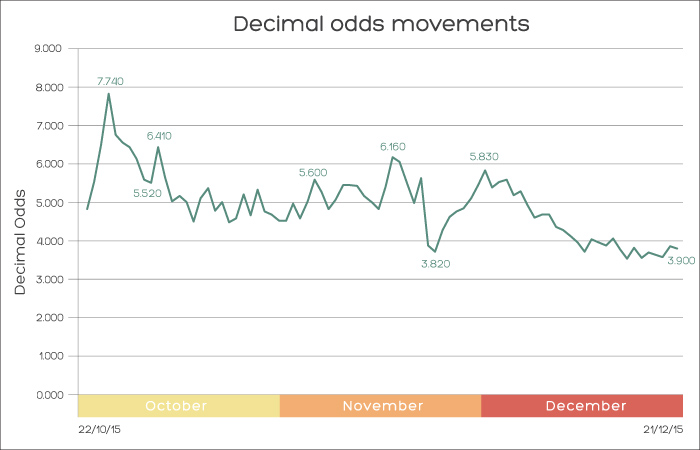 Key dates to look at

Looking ahead, all eyes are on the Nevada and South Carolina primaries on Saturday 20th February, where the stakes will be high.

What is worth noting when it comes to Trump, is that by turning a qualification for office (political experience) into liability and inexperience into an asset, he has managed to give voice to an alienated part of the GOP base.

Those tired of conventional scripted campaigns and mechanical repetitions as performed by his contenders are delighted in Trump’s willingness to speak “unfiltered”.

There is only one cloud on Trump’s horizon. Despite his landslide victory in New Hampshire, he was still within the prediction range of the final pre-primary polls.

He definitely gained momentum from the New Hampshire results, but he is not unstoppable as of yet. It's down to Nevada and South Carolina to decide whether the bombastic republican candidate is more of a concept or a reality.

In case he flounders, it will be interesting to watch which nominee will placate the alienated segment of GOP, leaving open the question: Is Trump’s biggest impact on politics yet to come?

Get into the betting action with the best 2016 U.S. Presidential Election outright odds online at Pinnacle.