In 2016, bookmakers largely misjudged the chances of President Trump and Brexit occuring. In 2017, France, Germany and the Netherlands are going to the polls in a round of elections that is set to cause an earthquake at the core of the EU as we know it. With political betting more popular than ever among Pinnacle’s bettors, don’t place a bet on politics before reading the five reasons why bookmakers fail in political predictions.

Let’s start with a crash course on how bookmakers set the odds. Betting companies employ a team of people, called traders or odds compilers who calculate the statistical probabilities of outcomes based on past results. Although this common practice works in sports where every second of action is monitored and registered by various parties interested in sports data, it is easier said than done for politics betting.

Before 2016, when was the last time Donald Trump campaigned for the US Presidency or the British people were asked to decide whether they want to leave the EU? Exactly. This is why normal rules don’t apply in politics betting. The below chart shows the proof is in the pudding - it analyses the implied probability of Trump and Clinton to win the 2016 US elections based on Pinnacle’s odds. 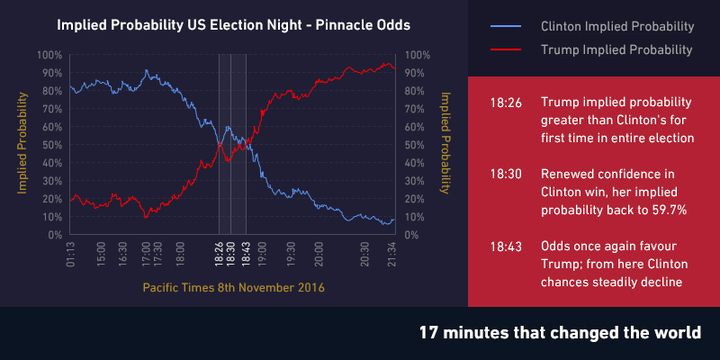 It wasn’t until the vote counting was under way for the betting odds to get in sync with reality, which brings us to the second reason why bookmakers fail in political predictions.

When bookmakers don't have enough data, they inevitably rely on gauging the public opinion. This is where polling comes into play. Polling has previously proven a reliable guide in political voting, however, confidence in survey results could not be lower at the moment. The Brexit-Trump shock results brought home a point - people poll in one way and act in another. Wondering why that is?

To paraphrase Mark Twain: “There are lies, damn lies and polls.” Statistics don't lie, people do. The truth about lying, according to social science research, is that lying in surveys could be the result of social desirability bias. In plain English, when people are asked to give an opinion on sensitive topics, they are prone to giving misleading information out of the fear of what they will look like if they say the truth. But even when they do give truthful answers, polling can still miss the mark. How come? Indecision plays a big part.

Statisticians are aware of the social desirability bias and take all measures available to minimise this effect. If predicting the extent to which people lie is somewhat possible though, based on rates of lying in previous surveys, there is one thing that even the best statisticians in the world cannot account for - the undecided voters.

In head-to-head elections that are close and the winner is decided at the very last moment, pre-election polls are as good as worthless. The ones who will determine the winner are the ones who have not made up their mind yet, which makes statisticians useless and the betting odds irrelevant, or depending on your point of view, a valuable opportunity for betting profits. The higher the uncertainty, the bigger the odds fluctuation and the more opportunities there are for the bettors to place their bets at favourable prices. So, if the polls cannot gauge the undecided ones, who do they really gauge?

Welcome to a crash course in how the bookies set the odds, part two. Once they set the opening odds, the players bet on the markets they believe offers them good value, causing the bookmakers to constantly adjust the odds in order to maintain a balanced book and avoid exposure on one side - also known as following the money.

While surveys measure the opinion of people who are involved in voting, the odds reflect the betting activity (i.e. what people who want to make money think). That is a completely different ball game. Let's take for example the upcoming French elections. While the number of French citizens registered for voting is about 43 million, the number of people who bet on who will win the French elections can be as big as the adult population of earth with access to the internet or a betting shop.

And last but not least, sex comes into play.

When Cristiano Ronaldo is on the pitch, the only thing that can drastically change his odds of scoring is an injury. Political candidates, however, can see their ratings go from top to flop as fast it takes for a sex scandal to spread across Twitter. From the Profumo affair that rocked the British Establishment during the Cold War and contributed to the defeat of the Conservative party in 1964 to the most recent Clinton-Lewinsky affair, sex scandals in politics have the potential to turn the betting markets upside-down.

Now that you know why bookmakers struggle to get the odds for political outcomes right, do you think you can beat the bookie? Get unbeatable odds on the French and German elections at Pinnacle, the only bookmaker who welcomes winners.