How the election works & swing states

The voters only indirectly select the US President; it's actually the Electoral Colleges in each of the 50 States that cast the crucial votes, and each voter is therefore voting for their candidate’s elector – the two are one and the same.

The Electoral College consists of 538 electors so a majority of 270 electoral votes is required to elect the President. Each state’s entitled allotment of electors is in proportion to population (according to the 2012 Census) so California (55), Texas (38), New York and Florida (29) are vital because of their size. Interestingly only Florida has voted both ways since 1992.

On the basis of stonewall Democrat leaning states it can be argued that a Democratic candidate could expect to win 257 electoral votes of the 270 needed to cross the winning line, without even trying. It is these so-called ‘swing states’, where the political persuasion is fluid enough to be swung to either side, that are crucial to Presidential Elections with Florida top of the list.

The key factor in trying to make these states swing in the right direction is money. Funds are poured into canvassing in these states, whether through live rallies, door-to-door initiatives, TV ads, social media or tele-campaigning, to the point where success can strongly be correlated to the money spent.

Money – The key factor in the race to the Whitehouse?

The simple truth is that Democrats now hold the advantage in raising funds, having learned harsh lessons from the late 80s and 90s when the reverse was true.

It may seem counter-intuitive to bettors that Republicans gained control of the Senate in the midterms yet have an implied probability of just 40% for success in the 2016 Presidential race (as per mid November). Aside from the natural tendency for incumbents to suffer in midterm elections, one of the reasons for this paradox is the massive importance of campaign funding.

Note: the odds in the graph below will be updated monthly, as we track the odds from now until Election Day. 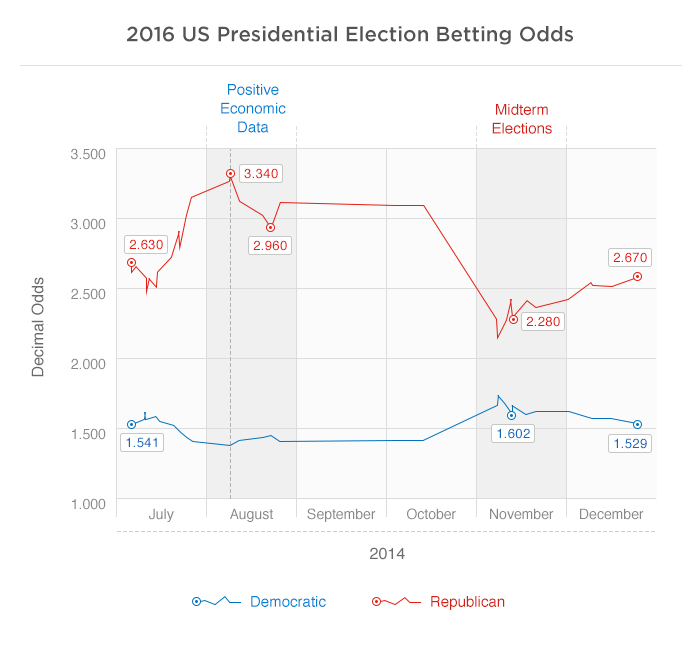 Midterms – What did they tell us?

As their name implies midterm elections for the Senate and House of Representative come midway through the Presidential Term. As such they took place on November 5th, two years ahead of the Presidential election and provided a good barometer of public sentiment; the big caveat is that this is a snap-shot of sentiment as of November 2014 – two years is an eternity in politics.

Notwithstanding that, the results were decisively in favour of the Republicans in several swing states, giving the GOP control of Senate and power over the political process. This is key, as their ability to stall any positive policy action is likely to be construed by the electorate as failure by the Democrats, rather than their deliberate obfuscation, which they will play on across the campaign trail.

It should be noted how low Obama’s approval rating has fallen, to the point that Democratic candidates in midterm campaigns actively discouraged him from supporting them, with many even avoiding referencing him in speeches. With the loss of control of the Senate, Obama looks like a lame-duck President; the question faced by bettors is to what extent will this impact the odds of a Democratic successor replacing him in the White House?

There is a saying on Capitol Hill - the only issues that matter are those on a 90-day timeline; anything else is just too far into the political future. This is a sad indictment on the modern political/electoral dynamic but it is nevertheless a reality. The fickleness of voters has been studied, with some concluding the number of times a Presidential candidate smiles can be influential. If the 90-day rule applies, midterms must be taken with a pinch of salt.

Bettors can of course correlate midterms with Presidential outcomes, and there have been 57 previous elections, which provides a significant amount of form to study, but politics is about the here and now. It is highly unlikely that what concerns Americans in November 2014 will be on their dial in 2016.

The US economy maybe growing, while unemployment is falling and the dollar recovering strength, nevertheless, Federal Reserve Chairwoman, Janet Yellen, is walking a tightrope.

Positive recent US economic indicators are in contrast to global decline while many commentators suggest the US economy won’t survive without the intravenous investment of the Quantative Easing programme, which was only recently turned off. What if the converse happens and the economy over-heats? What about interest rates, can they be kept at historic lows to stimulate investment, while potentially building asset bubbles in stocks and property?

The direction of the economy will be critical to the Presidential race such that bettors require a crystal ball to know where the economy is heading, while geo-politics is even murkier. Islamic State (IS), the current bête-noir of the West, was totally unheard of 12 months ago, so what homeland threats will Presidential candidates be addressing on the stump in Autumn 2016?

Obama won a second term on a pledge to bring troops back from Iraq, he now moves into the end of his second term committing troops to another questionable Middle-Eastern offensive, such are ‘unknown unknowns’ to borrow from former Defence Secretary, Donald Rumsfeld. The Ebola crisis could easily fall into that category with the potential to dominate homeland fears.

One of the most obvious tools that bettors can use to provide insight into election results is polling data. An entire industry has grown up around the polling samples of the electorate in order to get a steer on the eventual official outcomes. This has created a positive feedback loop with media and political apparatus now scrutinizing polling data, leading to more polling.

Polls aren’t however, without their flaws. Samples are often small, and not always representative of the true electorate, while their accuracy can only apply within the context of the time they are conducted. As discussed above, sentiment can change very quickly.

They are however useful tools for bettors, especially the so-called ‘poll-of-polls’, aggregates of individual polls that can smooth out the biases. Nate Silver has built a reputation upon his ability to use polls (among other bespoke indicators) to predict the 2012 election correctly in all 50 states; such can be their power.

One UK bettor felt enough confidence in polls ahead of the 2014 Scottish Referendum vote to bet £1,000,000 on the No vote. “By June there had been something like 85 individual polls and not a single poll had actually had a "Yes" outcome.” In the end some polls did eventually put the ‘Yes’ vote ahead, but this punter landed his gamble largely on the evidence of polls.

One of the biggest difficulties in predicting two years in advance who’ll cross the finish line first is that the candidates are not yet known. Yes, Hilary Rodman Clinton appears to be the anointed one for the Democrats, but she was hotly tipped in 2008 until a relatively unknown Afro-American Illinois Senator blew her away.

She will have more challengers and even though she will be much wiser and richer from a campaign perspective, there is the gender issue. Clinton needs to cross the Rubicon for women in the way Obama did for the Black community, with no less a challenge, perhaps an even greater one, in becoming the first female Presidential Candidate of a major party. Who will carry the Democratic message across the US in Autumn 2016, if not Clinton?

The key point weighing against the Republicans, which could be another factor contributing to their current odds, is the absence of a strong and obvious Republican Presidential candidate. Most names in the hat lack momentum; many are fighting damaging corruption cases, none unite the hard-line and moderate influences, while one of the more likely runners, Mitt Romney, has previously tried and failed.

Bettors should keep a very close eye on the race within the race, as the GOP struggles to find the face and voice for its tilt at wrestling power from the Democrats on November 6th 2016. Candidacy is just one factor that is likely to influence the outcome and to which bettors must assign probabilistic values to in order to make an effective assessment of where value lies in 2016 US Presidential Election betting.

Since we posted the article, in the wake of the mid-terms and a resounding Republican success, the odds have actually moved in the opposite direction. As of January 12th the Democrats are now available at 1.529 having been at 1.581 when this article was originally published. This further reinforces the idea that what happens in the mid-terms isn't necessarily seen as reflective of what will happen at the polls in November 2016.

The Republicans have control of both Houses which have now resumed business, with several key battles raging such as immgration and health, with the GOP desperate to water down Obamacare. However, the biggest story is the strength of the US economy, which stands out in stark contrast to almost all other major economies bar the UK. Unemployment fell to 5.6% in December, capping the best year for job creation since 1999. Is this factor, more than any other, influencing the market?

Jeb Bush - former Governor of Florida - seemingly threw his hat into the ring for the Republican nomination in December, saying he was 'actively exploring' a 2016 run. Jeb will look to follow in the footsteps of his father and brother, and become the next President of the USA, but
he is seen as too liberal to unite the Republicans, and the odds didn't react to his announcement.