Showcasing some of the best underdog stories in recent memory, our Against the Odds series delves into some of the greatest sporting achievements from a betting perspective. This article looks at the St. Louis Cardinals’ unbelievable run for the wild card all the way to the World Series.

An unlikely contender in the race for the World Series

Our featured team in this article, the St. Louis Cardinals, were not considered to be in the MLB championship picture at the start of the season. The consensus among bookmakers was that the Cardinals weren’t in the top five contenders, for many of them even the top ten was a stretch. The odds Pinnacle had suggested as much.

Below is what the top of the market looked like in Pinnacle’s 2011 World Series winner market before the season got underway.

Injuries would play a big role in the Cardinals’ season, with the first of those coming before the season even began in the form of key player Adam Wainright who would miss the entire campaign with an elbow injury. The Cardinals knew that without Wainright, it would be an uphill battle.

They opened the 2011 season with a disappointing 2-6 record, but managed to recover swiftly by April to sit in first place in the Central division of the National League (NL) with 16 wins and 11 losses. 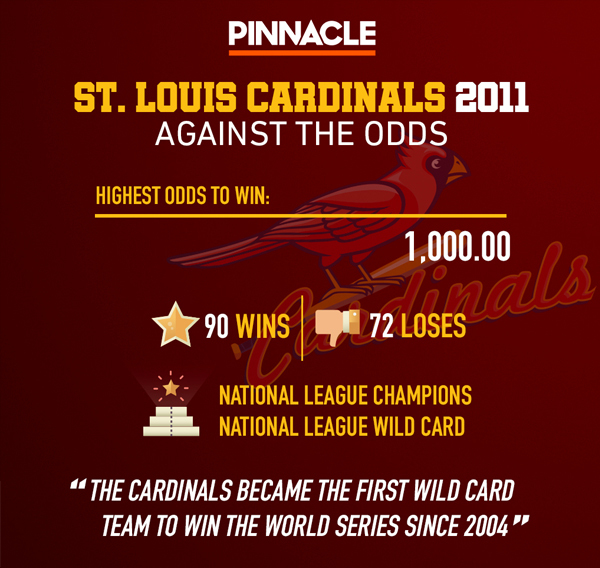 Injury would strike yet again however, with both Matt Holiday and David Freese heading to the treatment room – the latter suffered a broken bone in his left hand which resulted in a lengthy absence.

Despite those absentees, the Redbirds come together as a group and produced a 17–12 record in May which gave them a two and half game lead ahead of their closest divisional rivals, the Milwaukee Brewers.

Then came June, a month that would result in yet more injury misfortune. On June 19, Albert Pujols - the Cardinals number one scoring threat - fractured his wrist and was placed on the disabled list, expecting to miss out the next four to six weeks.

With the mounting injuries, St. Louis did their best to tread water. Through June, July, and August, the Cardinals amassed a respectable record of 39-41 given the circumstances. Their almost breakeven record meant that they had fallen 10 games behind Milwaukee in the NL Central standings and 10.5  games behind the Atlanta Braves in the NL Wild Card standings.

To be able to get back into contention, the Cardinals would need to pull off an amazing recovery without some of their best players.

Fighting back from the brink

On September 1, the Cardinals’ odds of making the playoffs stood at 1.7%. While bets were taken at 1000.00 for them to win the World Series, it is more likely that these came from diehard fans and casual bettors rather than anyone actually thinking they had a chance of going all the way.

Miraculously, those odds would tumble, as the Cardinals would stage a comeback for the ages. In their final 32 games, St. Louis would go 23–9 to erase a 10.5 game deficit to a Wild Card spot. This included a 18–8 run during September when the Braves went 9–18 to open the door.

By edging Atlanta to clinch the Wild Card berth on the final day of the regular season, the 2011 Cardinals completed the largest comeback in regular season history after 130 games.

The Cardinals finished second place in their division with a record of 90-72 to advance to the postseason and face the NL East champions the Philadelphia Phillies. The Phillies were heavily favoured to progress from the series with odds of 1.39 (72%).

The road to the World Series

St. Louis would defeat the Phillies in five games in the Division Series, setting up a contest with the Milwaukee Brewers – the only team that had a superior record to the Cardinals in the NL division - in the League Championship Series. However, despite pushing the Cardinals one game more than the Phillies, the Brewers would be  defeated in six games to send St. Louis into the World Series.

The 2011 World Series would see the return of the Texas Rangers, who had lost the year before in 2010. For St. Louis, it was there third World Series appearance in eight years.

The Cardinals had overcome the odds to get to this point and would have to do so again if they were to clinch the World Series. Below is how Pinnacle priced up the market ahead of the series. 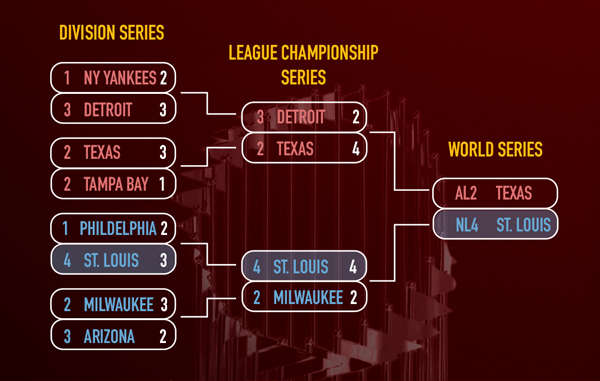 Game one went to St. Louis, with the Cardinals edging out the Rangers in a close fought 3-2 win. Texas responded with a close fought win of their own in game two to tie series 1-1.

After a total of just eight runs scored in the first two games, the offence of the two line-ups scored a combined 23 runs on a historic night in game three.

Albert Pujols had what was described as "the greatest individual hitting performance in World Series history", leading his St. Louis Cardinals to a 16-7 win that moved the series to 2-1 in the Cardinals favour.

This prompted a stern performance from the Rangers in the following two games, winning both with a combined score of 8-2, causing the Cardinals to fall behind in the series 3-2. At this point, Pinnacle’s odds suggested the Cardinals only had a 29% chance to comeback and win, but like the majority of the season the Cardinals refused to lay down. 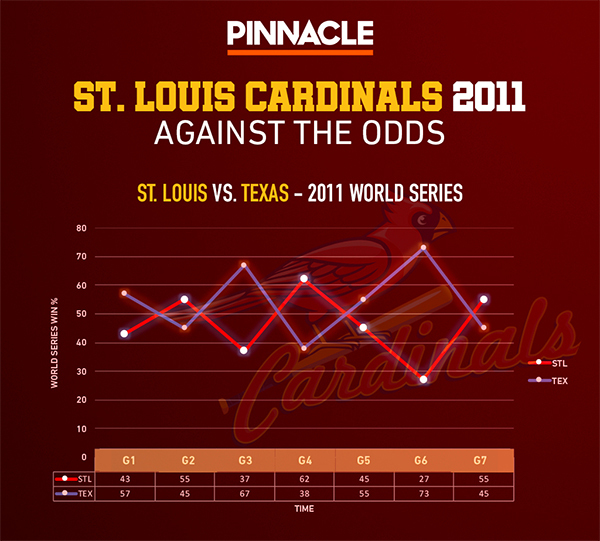 Game six saw St. Louis pull off one of the greatest single-game comeback wins in World Series history, winning 10–9 in 11 innings after twice being one strike away from elimination.

The Cardinals set two records in their Game six win. The first team to come back twice from deficits in both the 9th and 10th innings, and the first team to score in the 8th, 9th, 10th, and 11th innings.

On October 28, the Cardinals would complete the fairy tale end-of-season run.

Despite the injuries that plagued them throughout the season and being 10.5 games behind for the NL Central Division lead at one stage - the Cardinals defeated the Texas Rangers 6–2 in Game 7 at their Busch Stadium home in front of 47,399 fans to clinch the World Series with a 4-3 series win. 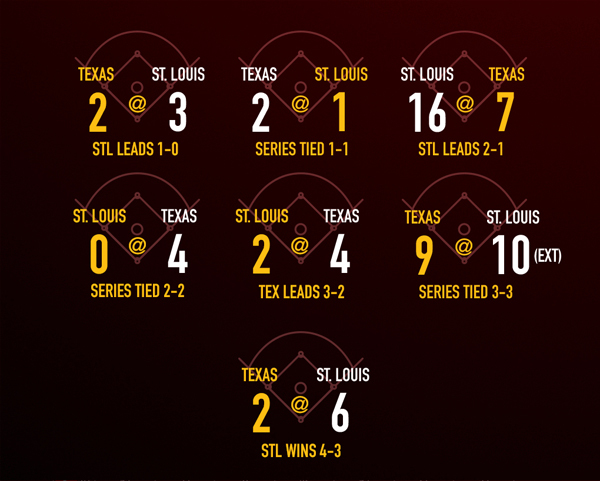 In terms of player accolades, David Freese would be named World Series MVP. He had 21 post season RBIs, a new MLB record while having a batting average of .348 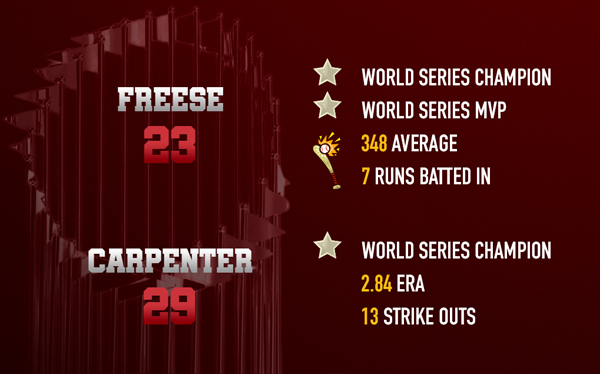 Chris Carpenter pitched in Games one, five and seven and his was 4-0 in the postseason with an 3.30 ERA.

In a season plagued by pre-season doubt and mounting injuries, the Cardinals pulled off some of the most remarkable set of  performances just to get into the post-season let alone go onto win the World Series.