Showcasing some of the best underdog stories in recent memory, our Against the Odds series delves into some of the greatest sporting achievements from a betting perspective. This article looks at the New England Patriots incredible 25-point comeback overtime victory in Super Bowl LI.

The New England Patriots came into the 2016 NFL season as one of the favourites to lift the Vince Lombardi Trophy, having won the Super Bowl two years prior. Pinnacle’s odds before the season started showed just how heavily fancied the Patriots were to make it to the season finale.

Meanwhile the Atlanta Falcons, who would go onto be the Patriots eventual Super Bowl LI opponents, were considered as big outsiders at the start of the NFL season.

Bookmakers were pricing the Falcons at 34.00 (2.90%) to win the Super Bowl that year – highlighting that this article could have and perhaps should have been about the Falcons Cinderella story to postseason glory – but it wasn’t to be. 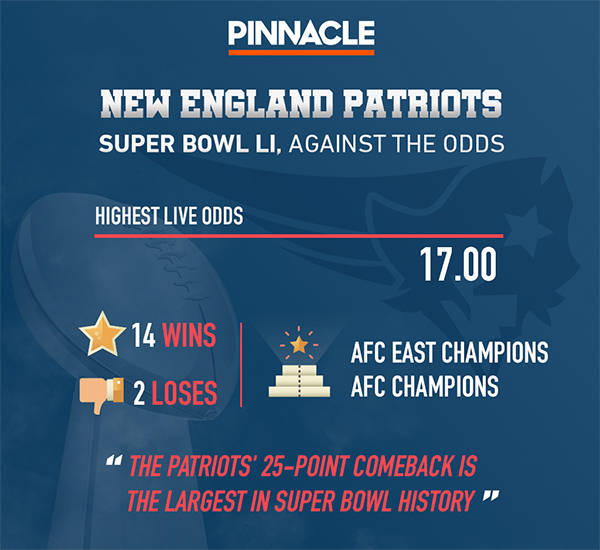 The Patriots faced a difficult start to the regular season as amidst the infamous ‘deflate gate’ controversy, star QB Tom Brady was suspended and would miss the first four games due to his alleged involvement in the scandal.

Despite Brady’s absence, the Patriots responded superbly going 3-1 from their opening four games. A run which would shorten their odds to 4.40 (22.7%) to win the Super Bowl.

With Tom Brady’s return, the Patriots would only lose one other game for the rest of the season ( 24-31 against the Seattle Seahawks in Week 10) finishing with a record of 14-2 on their way to winning the AFC East division, and clinching the number one seed in the AFC.

As a result, their odds to win SBLI shortened once again, with some bookmakers pricing them as short as 2.78 (36%).

It was the ninth time in franchise history that the Patriots had clinched the AFC title and what’s more, the Patriots did not lose a game on the road, making them the seventh NFL team ever to accomplish this feat.

Bill Belichick’s side also had the most pass attempts by a team without an interception to start a season and the single-season record for fewest interceptions thrown by a team (two).

On the defensive end, the Patriots led the league with the number one scoring defence for fewest points allowed (250).

The top seeded Patriots began their postseason run by defeating the Houston Texans 34-16 in the Divisional Round, whilst the second seeded Atlanta Falcons dispatched the Philadelphia Eagles.

The next week, in the AFC Championship Game, the Patriots defeated the third-seeded Pittsburgh Steelers 36–17, booking their place in Super Bowl LI. The Falcons meanwhile defeated the Green Bay Packers 44-21 to meet the Patriots at NRG stadium. 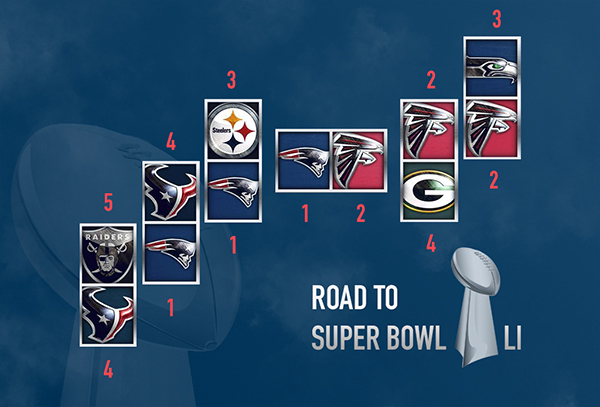 Led by regular season MVP Matt Ryan, the Patriots were going up against stiff competition in the form of the Falcons – but bookmakers gave the experienced championship winning Patriots the edge, pricing them as 3 point favourites on the Handicap, giving them a 57% of victory on the Money line.

One of the greatest-ever Super Bowls?

This was the Patriots’ record-setting ninth appearance in the Super Bowl, whilst this was just the second time in the Falcons’ franchise history that they had made it this far – losing their only other Super Bowl appearance in 1998.

The game started off in very cagey fashion, with the opening quarter scoreless after a resolute defensive performance from both sides. The second quarter however was a different story, with the Atlanta Falcons blitzing the Patriots with 21 unanswered points, punctuated by an intercepted pass that was returned 82 yards for a touchdown.

At this point, the market had flipped and the Patriots chance of victory had gone from 57% to 12% (odds of 7.22 just before half time). New England could only respond with a field goal in the dying seconds of the first half, sending both teams to the locker room with the score at 21-3.

Those expecting an immediate fightback from the Patriots were mistaken as Matt Ryan and the Falcons continued where they left off by marching 85 yards down the field and scoring a touchdown on their first drive of the second half to give Atlanta a 28-3 lead with 8:31 left in the third quarter.

At this point, bookmaker’s odds set the Falcons at 94%. There was surely no way back for the Patriots. Miraculously, against the odds, they did indeed fightback, scoring 25 unanswered points to tie the game at 28–28.

The Falcons had numerous chances to finish the game off, even in the final minute, but failing to get into a position to score a field goal forced them to punt and give possession back to the Patriots.

The Falcons had blown a 25-point lead.

Ten plays, 91-yards, and a 2-point conversion sent the match into overtime for the first time in Super Bowl history.

New England won the coin toss and chose to receive the ball. Following their incredible regular time comeback, the live odds gave the Patriots a 62% chance of victory at this stage. 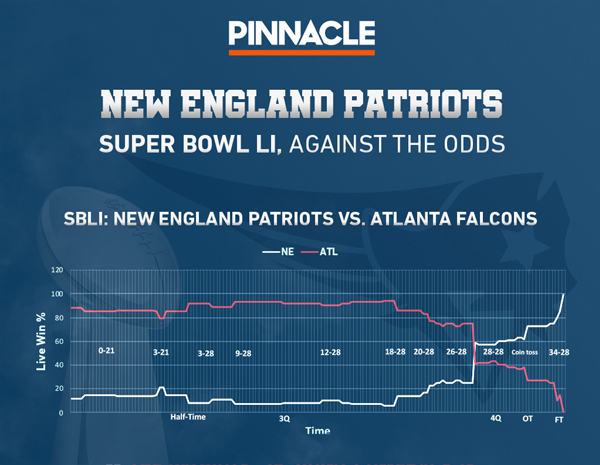 With eight plays and 75-yards, James White took a pass to the right and dove at the goal line for a touchdown, winning Super Bowl LI for the Patriots, 34–28.

It was the first time in NFL postseason history that a team with a 17-point lead or above in the start of the fourth quarter had gone onto lose the Super Bowl. The record up to this point for teams with that advantage was 133-0, a record dating back to 1940.

As confetti rained down, many Super Bowl records had been either broken or matched.

James White's 14 receptions and 20 points were among these broken records, along with Tom Brady, whose record-breaking 43 completed passes, 62 pass attempts, and 466 passing yards, saw him named Super Bowl MVP for a fourth time (the most of any player in NFL history).