Showcasing some of the best underdog stories in recent memory, our Against the Odds series delves into some of the greatest sporting achievements from a betting perspective. This article looks back to the historical run of the Las Vegas Golden Knights all the way to the 2017-18 Stanley Cup Final.

A group of misfits

This intriguing underdog sporting story is made unique by the Golden Knights roster. This was a newly formed NHL team made up of castaway players that were unwanted by the other 30 teams in the league, and left unprotected in the Expansion Draft.

As was to be expected, no one fancied the Golden Knights to make waves in the NHL, with bookmakers offering odds up to 501.00 for a team made essentially of rejects to lift the Stanley Cup. 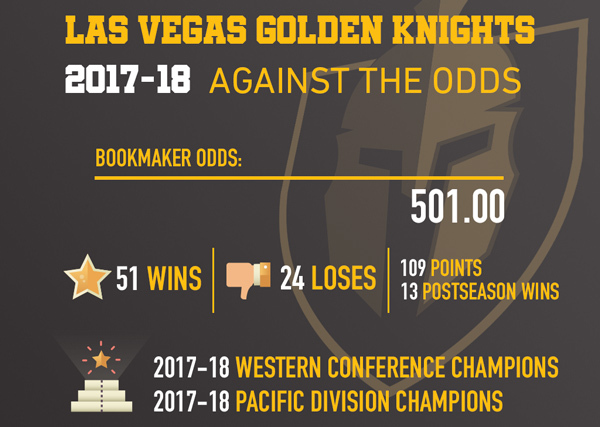 There were fans who took the Knights at this price, with many claiming it was merely to keep as a souvenir of sorts. There were, obviously, a lot more serious bets at the top of the market. This is what Pinnacle’s outright odds for the 2017-18 NHL season looked like:

Heading into their opening game against the Dallas Stars, the Golden Knights were given a 33% chance of victory. However, a remarkable performance from goalie Marc-Andre Fleury, who saved 45 of 46 shots, helped guide his team to a 2-1 victory – the first win in the franchise’s history.

In the weeks that followed, the Golden Knights went on to win eight of their first nine games – the first time a newly formed side had ever accomplished this feat in NHL.

Their fantastic form carried them into the All-Star break, with a record of 32 wins and 12 losses. James Neal, Marc-Andre Fleury and their coach, Gerard Gallant, were all awarded positions on the Pacific Division All-Star Team for their fantastic performances up to that point of the season.

As a result of the Golden Knights’ record-breaking run, their odds shifted significantly compared to the start of the season. This is what they looked like at the All-Star break:

LVGK odds at the All-Star break

Records continued to tumble as the regular season reached its finale, with the Golden Knights breaking an expansion team record for the number of wins in a debut season with 34 victories.

Not only that, but on March 31, the Golden Knights achieved the remarkable feat of clinching the Pacific Division title, becoming the first expansion team in NHL, NFL, NBA and MLB sports to win a division title in its inaugural season.

After clinching the Pacific Division, the Golden Knights turned their attention to the Western Conference finals and were slightly favoured in both matchups against the Los Angeles Kings and the San Jose Sharks. They were 1.80 to win the series against the Kings and won in four games; and 1.75 to beat the Sharks (it took them six games to clinch victory).

This meant the Golden Knights became only the third team in NHL history team to advance to the Stanley Cup Finals in its opening season.

Despite being written off by pundits, unfancied by the betting markets and labelled a team of misfits by the majority of NHL fans, the Golden Knights were now one series away from glory. They opened as slight favourites to win the series against the Washington Capitals, with the bookmakers giving them a 55% chance of lifting the Stanley Cup. 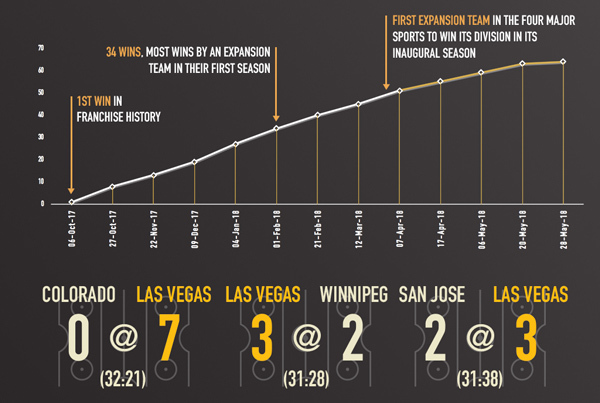 An opening, hard-fought 6-3 win in the first game of the series seemed to indicate this was really going to be the Golden Knights year. However, the Capitals would go onto play the role of dream destroyers, storming back to win the next four games and clinch the Stanley Cup.

Despite falling at the final hurdle, it cannot be underestimated how incredible an achievement this was.  The redemption of players who were deemed surplus to requirements by the rest of the division makes this story even more extraordinary, with Centre William Karlsson having had the best season of his career and winning multiple awards.

Marc-Andre Fleury was a nominated finalist for the Vezina Trophy (Top Goalie) and, Coach Gerard Gallant awarded the Jack Adams Award (Coach of the Year). William Karlsson scored 43 goals and finished third in the Maurice "Rocket" Richard Trophy – the award given to the top scorer in the NHL. He had managed just 18 combined goals in his first four full years of playing in the NHL.

Fleury made 1276 saves with career highs in save percentage and goals saved above average (20.77 GSAA). He was awarded the following offseason with a three-year, $21 million contract. 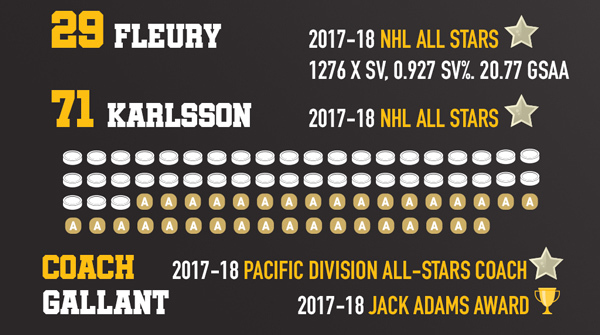 Defying expectations and shattering records along the way, the Golden Knights can claim to have enjoyed the best debut season for any expansion team in North American professional sports history.