Showcasing some of the best underdog stories in recent memory, our Against the Odds series delves into some of the greatest sporting achievements from a betting perspective. This article looks at the remarkable comeback from the Cleveland Cavaliers during the 2015-16 NBA finals.

High expectations going into the season 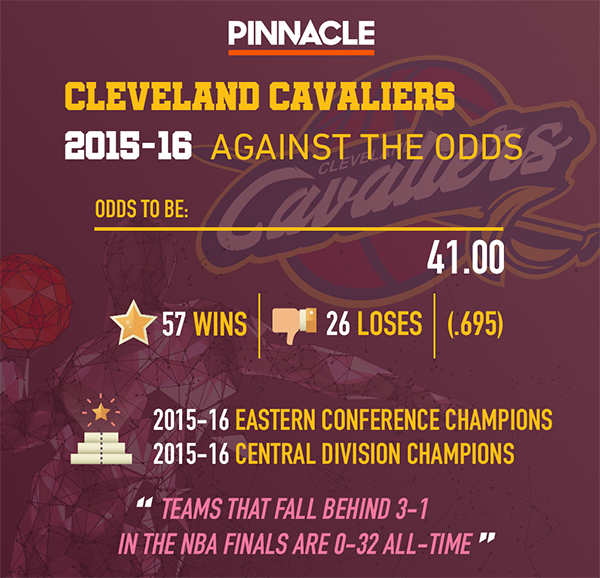 Both the Cavaliers and GSW made great starts to the season, and heading into the All-Star break, both were top their respective conferences (Cavs East, GSW West). GSW in particular only lost four games up until the break, compared to the Cavaliers succumbing to 14 losses in the same period.

February 10, marked the All-Star break and the odds shifting accordingly. Below is a look at both teams’ records and what it meant for their odds to win the 2015-16 NBA Championship.

End of the regular season

Both GSW and the Cleveland Cavaliers would carry their form into the latter stages of the regular season, with both going onto clinch the no.1 seeds in their respective conferences.

It was a regular season to remember for GSW, as the reigning NBA champions broke legendary 1995-1996 Chicago Bulls 72-10  regular season team record (the team that featured Michael Jordan) for best regular season record. They finished with a record of 73-9 (.890).

Stephen Curry had a regular season to remember, averaging 30.1 points per game and shooting 90.8% from the free throw line. Draymond Green was also crucial to the Warriors’ success, averaging the most assists, rebounds and minutes played per game across the regular season for his team.

The Cavaliers would finish with a record of 57-25, finishing just one win ahead of the Toronto Raptors record of 56-26. The key to the Cavaliers success was their effectiveness at both ends of the floor, with LeBron James and Kyrie Irving leading offensively whilst Kevin Love and Tristan Thompson marshalled defensively.

It was clear that anyone trying to stop the record breaking GSW were in for a big challenge and the team coached by Steve Kerr were heavily fancied by the wide majority of basketball bettors and fans to retain their NBA title.

What happened in the playoffs?

The Cavaliers really stepped their game up a level in the playoffs, sweeping both the Detroit Pistons and Atlanta Hawks 4-0 in the first and second round of the Eastern conference playoffs.

In fact, the Cavaliers did not suffer a defeat until the Eastern Conference Finals in Toronto, eventually overcoming the Raptors 4-2 to set up a NBA finals rematch from last season against the record-breaking reigning champions GSW.

Intriguingly, GSW had to overcome a much trickier Western Conference playoff to reach the finals, suffering over more than half the amount of losses (five) in the first three series than in the whole regular season. They overcame both the Houston Rockets and Portland Trail Blazers in five games but would be pushed to the absolute limit by Oklahoma City Thunder in Western Conference Finals.

The battle for the NBA Championship

Despite their rocky road to the final, GSW began the Championship series against the Cavaliers in confident fashion with two back-to-back games on home court resulting in GSW going 2-0 in the series.

Having won both games with a combined score of 214-166, the Warriors set another record with the highest winning margin in the first two games of an NBA Championship Finals (a 48-point differential). 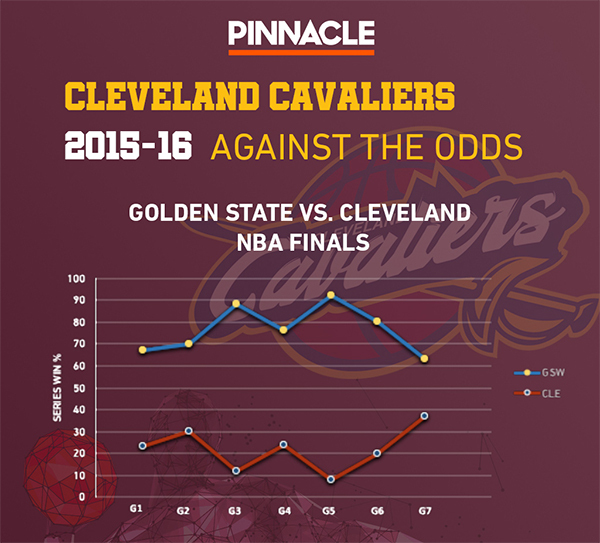 Game three at the home of the Cavaliers, the Quicken Loans Arena, would signal the start of their fight back. The Cavaliers won by 30 points and make it 2-1 in the series before moving on to game four. They would have also known that game four was a must win as no team in the history of finals series has come back from a 3-1 deficit (0-32). Heading into game four, the odds had shifted and GSW were at 89% to win the series.

GSW would go on to make yet more history in game four, by making 17 three-pointers – the most for a single NBA Finals game. Not only that, GSW only made 16 two-pointers (the first time in NBA Finals history a team had more shots from three-point range than two) on their way to a 108-97 victory to take a 3-1 series lead.

Crucially, Starting PF, Draymond Green had to be separated from LeBron James during the end of the game, which would result in a costly suspension.

The Cavaliers knew that despite there being three games remaining, they would have to do what no other NBA team has done in NBA Finals history and comeback from a 3-1 series deficit. So unfancied were the Cavaliers, they were given just a 7% chance of winning the series.

Game five back at Oracle Arena (home of GSW), where the Warriors hoped to be crowned NBA Champions with one more win, would see LeBron James and Kyrie Irving become the first teammates in NBA Finals history to score 40 or more points in the same game, leading the Cavaliers to a 112-97 win to claw back the series to 3-2, forcing a game six back in Cleveland.

Another outstanding performance from LeBron James who notched 41 points would see the Cavaliers take game six and tie the series 3-3 – forcing a winner takes all game seven.

It was a game that will go down in NBA history as one of the best game seven’s in recent memory as the Cavaliers had to overcome GSW’s home court advantage one more time if they were to seal a remarkable comeback.

Contributing a triple-double and one of the most iconic blocks on Andre Iguodala, James would lead his hometown Cavaliers to their first championship in franchise history – ending a 52-year drought of sports teams from Cleveland not winning a major championship.

More notably, the Cleveland Cavaliers become the first time in NBA history to come back from a 3-1 series deficit to win the NBA Championship – doing it against one of the best teams ever assembled.

LeBron James was named the Finals Most Valuable Player. He was the overall leader in points, rebounds, assists, steals, and blocks during the series, a feat that had never been accomplished in an NBA playoff series.