An in depth look at the history of the Bundesliga title race including season analysis and odds. Read on to inform your Bundesliga 2021/22 predictions.

Not many European leagues put as much weight on being ‘winter champions’ or ‘champions of the Hinrunde’ (Hinrunde is German for the first half of the season) as the German Bundesliga does. While the trophies may not get handed out until May, the opening 17 matchdays are usually a good yardstick as to how the rest of the campaign will pan out but this is not always the case.

Bayern Munich sat nine points clear of closest challengers Borussia Dortmund after the first half of the 2021/22 season, but does that mean they will be league champions come the summer? Here at Pinnacle, we dissect how performances in the early part of the season reflect the final standings and how heavily the winter break affects this.

Since 2012, Bayern Munich have won nine consecutive Bundesliga titles and look set to add a 10th league victory in 2022. They’ve failed to lead the standings during the winter break only twice in that time - in 2018 and 2019. That stands at an impressive 77.78% success rate.

In that time, they’ve had eight managerial appointments – including Jupp Heynckes twice and interim boss Willy Sagnol. They’ve dominated during this period though, and at this stage of the season have been 11 points clear on two occasions: in 2014/15 under Pep Guardiola and in 2017/18 under Jupp Heynckes.

"Bayern went on to win the league by 10 and 21 points respectively in those seasons."

But it’s worth analysing those two occasions where they weren’t crowned the Herbstmeister(team in first place after the first half of the season) ahead of the winter break.

In 2018, Borussia Dortmund – managed at the time by Lucien Favre – lost only once in the league in the first half of the season and topped the table at the winter break mark by six points. They appeared on course for their first Bundesliga title since 2011/2012.

However, BVB would go on to drop 17 points in the Ruckrunde (second half of the season), including three losses, and were overtaken by Bayern Munich – managed at the time by Niko Kovac – after suffering an embarrassing 5-0 loss to the Bavarians in Matchday 28.

Kovac’s side would win four of their last six matches to secure first position and the title, which many labelled as their most unconvincing title win for many years.

The second of these two instances occurred the following season with Julian Nagelsmann’s RB Leipzig setting the early pace in 2019/2020. They were crowned Herbstmeister with just a two-point lead to Borussia Monchengladbach, with Bayern another two points behind them. The preseason Outright odds had Bayern at 81.8% implied probability, whilst Leipzig stood at odds of 11.000.

But there was a belief that Leipzig could be a genuine threat to Bayern’s supremacy after the East German club won seven matches and drew only once between Matchday 10 and Matchday 17. RB were briefly in the top spot from Matchday 3 but really took control of the table on Matchday 15. 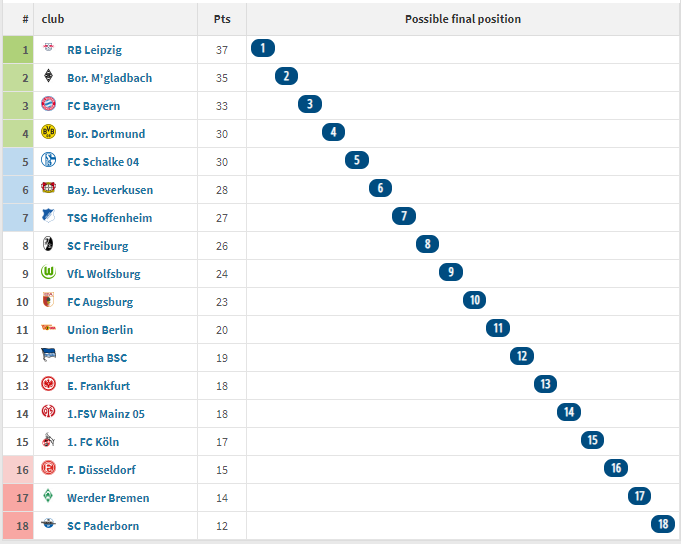 But the winter break appeared to come at the worst possible time for the young Leipzig side, who had teenagers Dayot Upamecano and Ibrahima Konate playing prominent roles. From Matchday 19 onwards they won just six more matches and drew eight times to hand control, and subsequently the title, to Bayern Munich.

Jurgen Klopp took over as Borussia Dortmund manager in 2008 after the club had just finished 13th under Thomas Doll. He would guide his new club to German Super Cup victory and a sixth-place finish in his first season in charge. This was followed by a fifth-place finish in 2009/10 and a return to European soccer competition.

But it was in the 2010-11 campaign that he fully announced himself and proved that his philosophy was a winning one. After an opening day defeat to Bayer Leverkusen, Klopp’s Dortmund won 14 of their next 15 matches to secure the top spot at the winter break mark.

But Pinnacle traders only took their first bet on Dortmund in the Outright odds on November 11, 2010, when they were already a 50% implied probability. Bayern were the preseason favourites at 1.650.

Klopp bought young players like Shinji Kagawa and Lukasz Piszczek (who’d go on to be a club legend). While the arrival of Robert Lewandowski perfectly complemented the exciting Mario Gotze and Jakub Blaszczykowski. After the restart, they wouldn’t lose until March 12, playing away at Hoffenheim and were crowned champions for the first time since 2001-02 with two matches to spare.

The 2011/12 season saw the arrivals of Ivan Perisic and Ilkay Gundogan, but they’d lose three of their opening six matches and were sitting 11th in the table with just seven points – nine points behind Bayern at that stage. However, they’d go undefeated for the remainder of the season, sitting just three points off the top spot at the winter break mark. 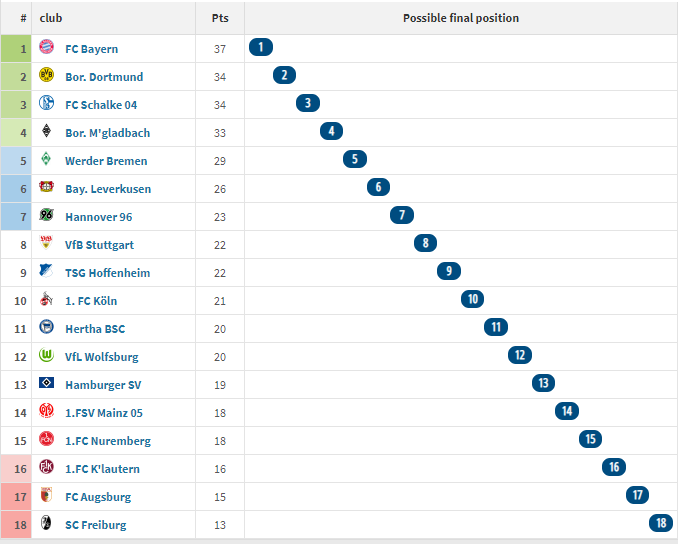 However, they secured a pair of 1-0 victories over Bayern Munich and went on to go six points clear at the top of the table. It was one of the most impressive title victories the Bundesliga had seen and with 81 points, they broke the points tally record, and their 25 victories from 34 matches in the season contributed to a 73.5% win ratio.

Pinnacle’s odds saw Bayern Munich open in the preseason at 1.570 but by mid-March, they were out to 2.750. On the other hand, Borussia Dortmund were 6.160 outsiders but at the same point in March were as short as 1.510.

Bayern have dominated German soccer for over a decade but it wasn’t quite the same in the late 1990s and 2000s.

Kaiserslautern were promoted to the Bundesliga ahead of the 1997/1998 season and started the season with a 1-0 victory over reigning champions Bayern Munich. In fact, they didn’t relinquish first place in the league from Matchday 4 onwards, holding a four-point gap over Bayern at the halfway stage.

The squad was built on the goal-scoring abilities of Olaf Marschall (21 league goals), captain Andreas Brehme, and a young Michael Ballack – all led by Otto Rehhagel, who’d been sacked by Bayern in 1996. After Matchday 33, Bayern could only draw with MSV Duisburg and Kaiserslautern became the only newly promoted club in Bundesliga history to have won the league.

There have been other notable examples of teams who have gone against the grain. Take the 2006/07 season: Bayern Munich were at preseason odds of 2.530, with Werder Bremen – who led the table at the winter break mark – at Outright odds of 5.140.

Our traders didn’t take a bet on the eventual winners Stuttgart to triumph until September 5, 2006, at odds of 101.000* (a 1% implied probability). They were four points off the top spot after Matchday 17 but with the youngest squad in the Bundesliga, Stuttgart won their final eight matches of the season to secure the title, holding a two-point advantage over Schalke 04 and four-point cushion over the season’s Herbstmeister, Werder Bremen, in third. 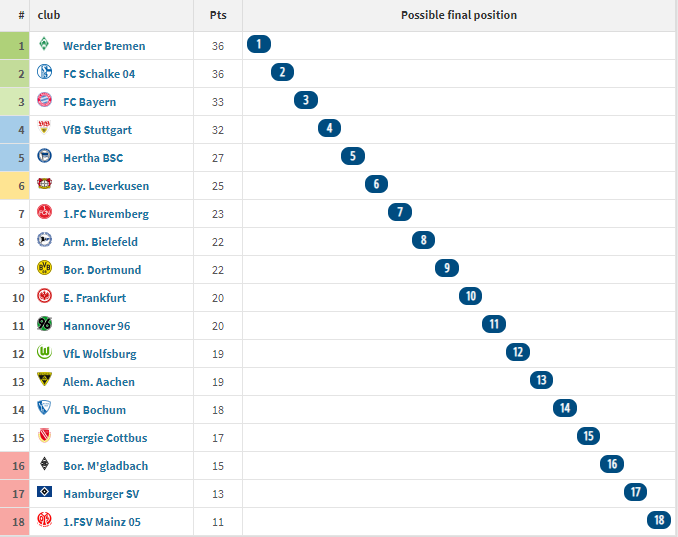 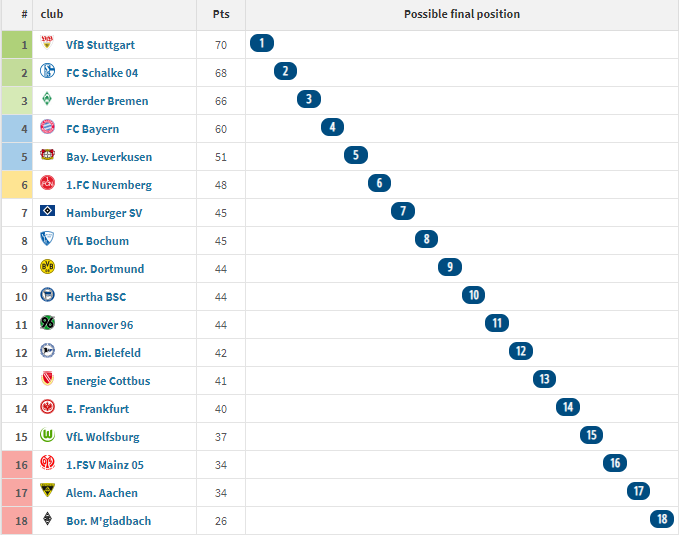 The Bundesliga title race: A conclusion

Having examined the historic data and the previous campaign’s trends, it shows there is no guarantee that a team can replicate their form from the Hinrunde in the Ruckrunde. Statistically, in the 15 seasons between 2006/07 and 2020/2021, first place swapped 40% of the time – that’s taking into consideration Bayern’s supremacy from 2012.

The winter break is a chance for all clubs to recalibrate. It took the element of surprise and a new style of soccer to dominate from start to finish as seen with Kaiserslautern in 1998 and Borussia Dortmund under Jurgen Klopp between 2010 and 2012. But the findings do suggest there is some jeopardy in becoming the Herbstmeister and that bettors should be wary of backing the Herbstmeister, as it doesn’t necessarily mean form will be maintained for the remainder of the season.

Looking at what might lie ahead for the 2021/22 season, recent history proves Bayern Munich will be too strong for the rest of the field, despite there still being 14 games remaining. Pinnacle’s latest odds suggest this too, with Bayern priced as the 1.025* favourites to win the league in the Outright market. The nine-point gap they had at the winter break was the joint highest in the last six seasons. However, Borussia Dortmund are at 15.000* and if they can get within three points of the reigning champions, history shows they could overturn the points deficit.

Get unrivalled odds on the German Bundesliga with Pinnacle.

Charlie Dear
Charlie graduated in BA Hons Sports Journalism in 2015 and has a keen interest in European soccer – particularly in Germany. He has since gained experience writing for newspapers, online magazines and within the sports betting industry before joining Pinnacle. Charlie likes to delve deeper into the stories the sporting world is talking about and look at things through a predictive lens.
See more articles by Charlie Dear Show team
Show more Show less