Although Liverpool (1970’s and 80’s) and Manchester United (1990’s and 00’s) have enjoyed dominant reigns in the top flight of English soccer, it is still widely regarded as the most competitive league in the world. However, there is rarely any evidence given to prove that this is actually the case.

The fact that there have been four different winners of the Premier League in the last five seasons perhaps shows why the English league is labelled as the most competitive.

When assessing a league’s level of competitiveness, there are various factors to consider. Even if one team dominates a league in terms of finishing first, the competition for remaining places could be much closer than in others.

The Euro Club Index (ECI) is a well-renowned ranking system for soccer teams across leagues in Europe. This system uses scientific statistical methods to calculate point-based values for historical and actual match results across various competitions and acts as a good measure of individual team strength.

We can use the ECI as a basis for gauging the overall quality of a league (the average ECI for all teams in the league) and calculate how big the gap in quality in each league is by calculating the difference between the top and bottom rated teams.

The table below shows both the league average ECI and ECI differential for the top five leagues in European soccer from 2012/13 to 2017/18.

*Data sourced from Euro Club Index (figures taken at the start of each season).

Which league has the most dominant teams?

As mentioned above, the most common method of assessing the competitive nature of a soccer league is to look at the top of the table. The fact that there have been four different winners of the Premier League in the last five seasons (Chelsea the only team to win it twice) perhaps shows why the English league is labelled as the most competitive.

Looking at how often a match is drawn in each league can be used as an indicator for how evenly matched teams in the league are.

Bayern Munich and Juventus have won every title in their respective leagues in the last five years, while PSG have won all bar one in France (Monaco winning in 2016/17) and three clubs - Barcelona, Real Madrid and Atletico - have all won the La Liga title between 2012/13 and 2016/17.

It is when looking at the proportion of points won in these leagues over the last five seasons that makes things more interesting. Bayern Munich have won 10.19% of the points shared between Bundesliga teams in the aforementioned period, further highlighting their apparent domestic league dominance when compared to other teams across Europe.

The table below shows the two teams from each league with the highest proportion of total points won across Europe’s top five leagues between 2012/13 and 2016/17:

*Monaco have the second-highest proportion of Ligue 1 points for the four seasons they have been in the division.

We can see that Bayern Munich are by far the most dominant team according to the proportion of points won in the last five seasons. Barcelona and Real Madrid are fairly evenly matched - both winning a higher proportion of league points than PSG - while Chelsea and Manchester City have won exactly the same amount of league points between 2012/13 and 2016/17.

When combining the top two teams in terms of proportion of points won in each league, we can see which is the most competitive when it comes to dominant teams.

Competition to be classed as the elite

Given that one or two teams dominate some leagues, it is hard to gauge how competitive these leagues are in terms of the other “elite” league positions. If we look at how many different teams have finished in the top tier of each league in the last five seasons, we can see how competitive each league is to be classed as elite.

The top tier in the Premier League, Serie A, La Liga and Ligue 1 is the top six while the Bundesliga’s top tier is the first five positions (this league only has 18 teams compared to the others with 20).

In this regard, Serie A is the most competitive league with 12 different teams finishing in the top tier. The Bundesliga has had 11 different top-tier teams, while La Liga (10), the Premier League (nine) and Ligue 1 (eight) are all slightly further behind.

How hard is it to stay in each league?

Although the main focus of competition tends to be at the top of the league in soccer, teams do compete for every position in the table. Relegation results in a team losing their place in the league so while the elite will aim to finish as high as possible, other teams may have more reserved ambitions of avoiding relegation and simply finishing above the relegation places (usually the bottom three).

If the same teams that win promotion to the top five leagues in European soccer are the ones relegated the following season, the competition for these lower places will not be very high. However, if newly promoted teams improve the quality of the league and older teams are relegated, it could be argued that the league is becoming more competitive.

Do draws make a league competitive?

If two teams are evenly matched in a single game (and neither is lucky or unlucky) we can assume a draw is a fair result. Therefore, looking at how often a match is drawn in each league can be used as an indicator for how evenly matched teams in the league are (of course some teams will draw considerably more games than others).

The table below shows the average percentage of games per season that have been a draws in Europe’s top five league over the last five seasons:

Which league is the most competitive?

Using a simple points scoring system based on all of the factors mentioned above, we can see that the Premier League is in fact the most competitive when it comes to the top five leagues in European soccer. La Liga comes in a close second with Ligue 1 slightly further behind, followed by Serie A and the least competitive league in Europe, the Bundesliga. 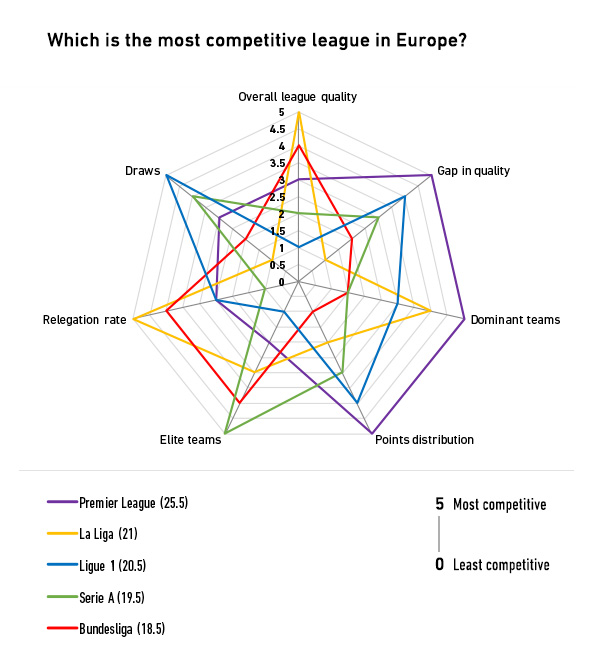 Want to keep up-to-date with ECI rankings and learn how to use them to your advantage? Follow Euro Club Index on Twitter.