'A team is most vulnerable just after scoring' is a phrase often heard in soccer. Like many soccer 'myths,' there is rarely any evidence given to proove this is actually true. Examining recent data can therefore help bettors calculate live soccer odds and develop a live betting strategy. Read on to find out if a team is most vulnerable after scoring.

There are many myths in soccer. Most are formed into clichés that rattled off with such frequency they become generally accepted – with no data examined as to whether they are actually correct or not. Some may well be; others, however, come under heavy scrutiny when investigated.

One such myth is that a team is most vulnerable just after scoring – a pertinent subject for bettors who are interested in live soccer betting.

Taking the phrase upon face value, there appears to be some logical validity to it – as with most myths and clichés. If a soccer match is tied, a goal disrupts the status quo and could lead to the scoring team dropping in concentration levels, or the losing team increasing their efforts to restore parity (now armed with added motivation).

How can we measure the myth

In the book The Numbers Game, Chris Anderson and David Sally suggest one method of investigating this soccer myth: looking at 1-1 draws and analysing when the second goal of the game was scored. For example, after a 50th-minute goal, the remaining time would be split into four equal ten-minute sections.

Naturally, there are limitations to this methodology. There are far more scorelines in soccer where both teams have scored than just 1-1. It is also impossible to know when betting if a game is going to end 1-1 and not 2-1, 2-2, 3-1 and so forth. This is especially difficult without a specific live soccer betting strategy.

Most soccer clichés are rattled off with such frequency they become generally accepted – with no data examined as to whether they are actually correct or not.

The method, though, still provides plenty of insight. For starters, how a team responds after going 1-0 up or down is a crucial element of live soccer betting. Analysing the period of time between the first goal and subsequent equaliser can then help determine the general pattern of the remainder of the match and be applied to similar scenarios in future.

As such, betting insight can be gained from looking into every 1-1 draw of a given division over the past five years. The claim that a team is most vulnerable having just scored appears to be particularly prevalent in English soccer. Therefore, the Premier League - with a sample size of five seasons to reduce the impact of outliers - seems the natural place to start when looking to prove or refute this myth. 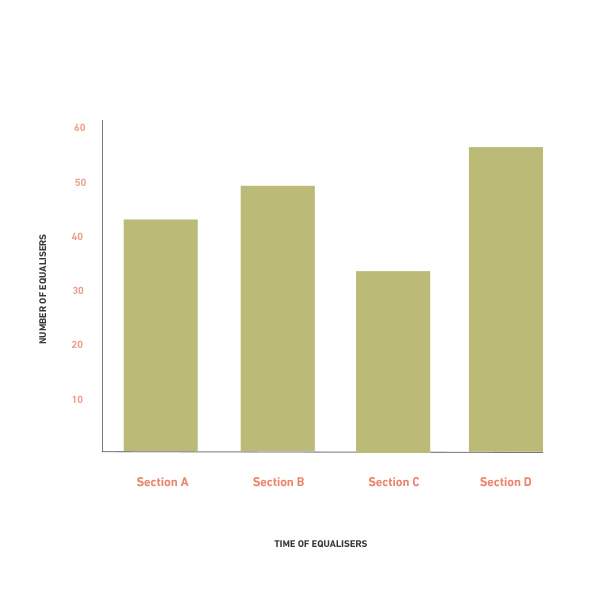 Upon conducting the research, our findings suggested a team involved in a 1-1 draw was, in fact, more vulnerable to conceding in the closing stages of a match rather than immediately after taking the lead. Indeed, only 23.6 per cent of equalisers in the described scenario came within the first of the four sections that followed the opening goal.

As can be seen, Section D was the most popular time for an equalising goal during the period.

Across the five seasons, Section C was the least prominent time overall for an equalising goal. A possible explanation is that sides tend to bide their time during this period before going for broke in Section D. This, too, is a common period for managers to make substitutions, with those substitutes then needing time to influence a game.

As can be seen, Section D was the most popular time for an equalising goal during the period. In three out of the five individual seasons measured, the most equalisers during 1-1 draws were scored in the 73rd minute or later (13 times in all three cases).

A final interesting trend is the 14 goals netted in the first 10 minutes after half-time – most likely inspired by managers’ team-talks or changes.

Furthermore, our results indicate that 26 goals were scored in the 90th minute or later. This paints a clear picture of Premier League clubs doing their utmost to salvage a goal in the final stages of a match, suggesting the leading side are perhaps most vulnerable when only needing minutes to hold onto a lead.

Section A and B combined produced 92/182 goals, with Sections C and D containing 90 (including the 90th minute goals). This is almost an exactly equal split and nowhere near enough evidence to support our soccer myth. Bettors looking at live soccer odds will therefore need to keep an even spread in mind.

For those interested in Money Line betting, meanwhile, the overall amount of draws was relatively similar over the five seasons: 40, 28, 36, 40 and 38. Learning how to predict draws in soccer can help bettors gain an edge on the bookmaker.

A final interesting trend is the 14 goals netted in the first 10 minutes after half-time – most likely inspired by managers’ team-talks or changes. Naturally, these only applied to opening goals scored in the first half.

Has the myth been busted?

In conclusion, data accumulated from recent Premier League campaigns does not support the myth that soccer teams are most vulnerable when they have just scored. That is not to say they are not at all vulnerable – and it is not to say they never concede straight after scoring. On average, though, it certainly does not happen most of the time.

Our results indicate that 26 goals were scored in the 90th minute or later. This paints a clear picture of Premier League clubs doing their utmost to salvage a goal in the final stages of a match

Indeed, if there is one time a team that has scored seems most vulnerable, it is in the last 20 minutes of a game. Even this, however, is just a few per cent more frequent than in any other sections of a match. Generally, there is an even spread across the remainder of a contest.

As ever, further research will only help bettors looking for an edge in live soccer betting. Potential areas for further investigation are finding out if a team is actually more likely to score again rather than conceding an equaliser. Moreover, bettors could apply the above method with other scorelines and look at the importance of the first goal in soccer.