A close look at the Valladolid vs. Real Madrid odds 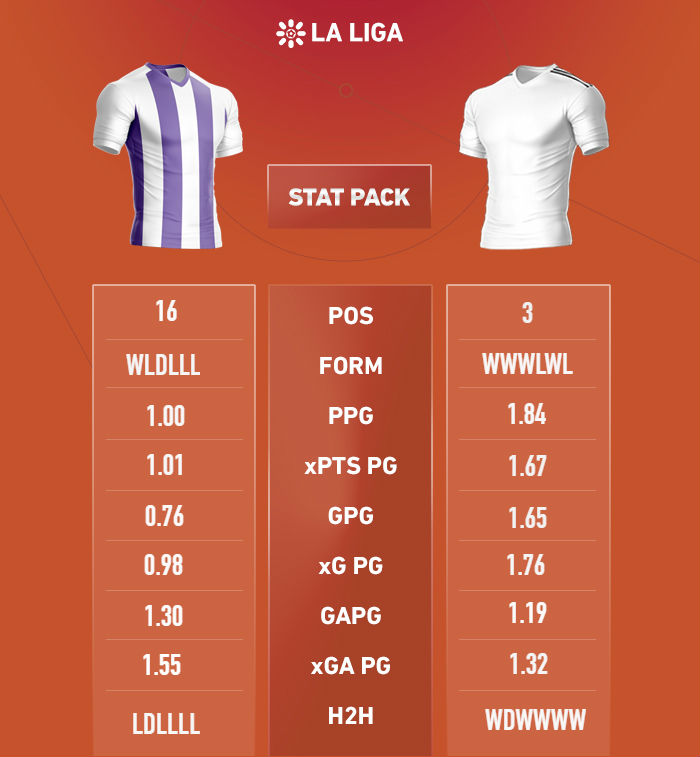 Having steered clear of the bottom three for the overwhelming majority of the season, Valladolid are in worryingly poor form as we approach the business end of the season, and have won just once since the start of the year.

Their last win was in the form of a 2-1 victory at home to fellow strugglers Celta Vigo on January 27.

Valladolid need to start picking up points soon but if ever there was a good time to play Madrid, it is now

Despite having a very promising start to their La Liga campaign, Valladolid haven’t been able to maintain any sort of momentum – and when viewing the La Liga form table (last six games) – they are second bottom.

Picking up just four points in their last six games, from the aforementioned victory against Celta Vigo, as well as a 0-0 at home to Villarreal, Pucelanos as they’re also known, have scored just three goals in that time – conceding 11.

A sign of how much their good form was confined to the early stages of the season, four of their six total La Liga victories came in a period of just 24 days between September 27 and October 21 – which accounts for 50% of their total points.

More still, Valladolid have been especially poor at Estadio Jose Zorrilla, and currently have the second-worst home record in the division – winning three, drawing three, and losing six.

For Real Madrid, the events of the past week have been nothing short of a nightmare.

Now set to end a season without a trophy for the first time since 2014/15, Madrid are in desperate need of an overhaul of their squad

Having been dumped out of the Copa del Rey last week by Barcelona, a second El Clasico in three days on Saturday saw Madrid’s already slim title hopes evaporate thanks to a 1-0 defeat.

Crowned European champions for the past three seasons, Real went into Wednesday night’s Round of 16 Champions League game at home to Ajax 2-1 up on aggregate – and comfortable favourites to progress to the Quarter Finals.

Stunned by a youthful Ajax team, Madrid were thrashed 4-1 on the night – as Ajax became the first team to overturn a 2-1 first-leg home defeat in the Champions League.

Now set to end a season without a trophy for the first time since 2014/15, Madrid are in desperate need of an overhaul of their squad – but have failed to acquire a suitable replacement for Cristiano Ronaldo.

With Gareth Bale’s days at the Santiago Bernabeu looking numbered following a number of frosty receptions from the Madrid faithful, Toni Kroos possibly past his prime, and Vinicius Junior still too young to be relied upon – the current Madrid side is already a shadow of its recent self.

With second place their most realistic ambition at this stage, Sunday’s game could see them potentially close the five-point gap on neighbours and bitter rivals Atletico Madrid, who host Leganes on Saturday.

The two sides last met back in early November, in Santiago’s Solari’s first game in charge for Madrid.

Having hit the crossbar twice in the second half, Valladolid entered the last 10 minutes of the game holding Madrid to a 0-0 draw. Upon entering those last 10 minutes, a deflected Vinicius Junior strike and Sergio Ramos penalty on 83 and 88 minutes respectively, secured all three points for the European champions.

Their first win in six league games at the time, the three points took them to sixth place – but just seven points off Barcelona. While Madrid are now third, they now lie 12 points adrift of the league leaders following last weekend’s El Clasico defeat.

With a very kind fixture list for the remainder of the season, second is still a real possibility for Madrid should they win on Saturday.

For Valladolid, Sergio’s men need to start picking up points soon or they’ll continue their slide down the La Liga table – but if there was a good time to play Madrid, it could be now.

Valladolid vs. Real Madrid: Where is the value?

Despite losing their last three games, and having their season effectively ended by Ajax on Wednesday night, Real Madrid are still strong favourites for Sunday’s clash so backing the away side at 1.625* seems sensible – but might not offer value to bettors.

Given Madrid’s recent troubles, and the possibility Vinicius Junior, who was forced off when injured against Ajax, may miss the fixture, Madrid could potentially struggle for options upfront.