The start of the Premier League season is awash with league position predictions. Instead of the subjective opinions of so-called “experts”, bettors can use more efficient methods to get a better idea of what the final league table will look like. This article explains how to use odds to predict the Premier League table.

Betting Resources has a number of valuable articles explaining how and why Pinnacle’s match betting odds for a soccer game offer the most value and are amongst the most efficient in the online sports betting market.

Armed with this knowledge we can use these match odds to determine whether a team has been lucky or unlucky, and where it ultimately might finish at the end of a season.

I have previously considered this methodology investigating the unlikelihood of Leicester City winning the 2015/16 Premier League. In this article I’m going to take a more general look at last season’s performances and try to make a few predictions based on those for the new 2017/18 season.

Using Pinnacle’s closing line to predict the probability of results

Pinnacle’s closing line in a 1X2 soccer betting market is arguably an excellent measure of the ‘true’ probability of a particular result occurring. Of course, we can’t ever know what a true result probability is before a match is played, but based on hundreds or thousands of similarly priced matches, the percentage of them that finish with the predicted results closely matches the probability implied by the odds.

Of course, to get a genuinely reliable measure of the result probability from the match odds, it is first necessary to remove Pinnacle’s margin. Naturally, exactly how Pinnacle will apply their margin to a set of ‘true’ or fair odds in the first place will remain a secret.

There are, however, a number of possible candidate methods that yield intuitively reasonable solutions that take into account the favourite–longshot bias, where prices on longshots are shortened proportionally more than they are on favourites.

One of these uses what is known as a logarithmic function. A logarithm is simply defined as the power to which a number must be raised in order to get some other number. For example, the base 10 logarithm of 100 is 2, because 10 to the power 2 = 100 and hence log10100 = 2.

The logarithm function for applying a margin to a set of ‘true’ odds assumes that the same power number is applied to each of the 1X2 odds. This is perhaps easiest to understand by means of an example.

Finding a set of ‘true’ odds from a published book of 1X2 odds simply reverses this process. The ‘logarithmic function’ model is intuitive in that it accords with the majority standard economic theory of risk and utility.

Assuming a logarithmic sensitivity to risks, a bettor would regard the difference between 2.00 and 1.93 to be equivalent to the difference between 6.00 and 5.49. The latter is greater than the former, but bettors are arguably less sensitive to lower probability events, so won’t make so much of a fuss over a proportionally less valuable price.

Once the true outcome probabilities have been calculated, we need to decide the result of a match. Obviously in the real world, we know what that is once the game has finished, but here we are interested in expected outcomes.

Using the match odds to model, no team finished more than four places away from expectation, whilst six matched it exactly.

Like expected value and expected goals, this is really just a method for determining what we can expect to happen based on the forecasting model parameters, in this case the expected result probabilities as implied by Pinnacle’s closing odds.

One way to simulate expected results is to randomise outcomes over many thousands of matches by means of a Monte Carlo simulation. If the random number generated is less than the probability of the result, then assign that result to the game (i.e. it happened); if it is greater than the result probability, then assign the null result (i.e. it didn’t happen).

By repeating this process over 38 games for an entire season for each team we can simulate the expected number of points won. The Monte Carlo method gives us a normal distribution of expected points totals for each team. Using Pinnacle’s closing odds for the 2016/17 season these are shown below for the winners Chelsea, previous winners Leicester City and relegated Sunderland. 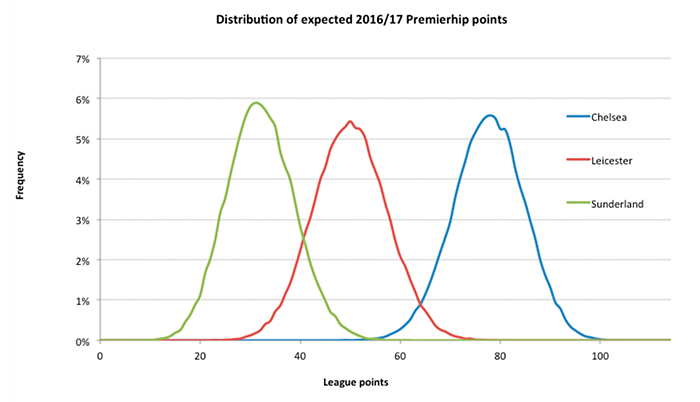 The average expected points total for Chelsea according to this model was 77.7. In fact we know they finished with 93 and this can imply two things.

Firstly, this model may not be a wholly accurate method for predicting the Premier League table. Indeed, according to the actual match odds, Manchester City should have won the title last season with an expected points total of 81.3. Of course, no model is wholly accurate, but some are better than others.

Secondly, it is known that model predictions are typically narrower than real life, with a range of expected points totals across all teams that is smaller than what actually occurs. Sunderland, who were relegated with 24 points had an expected total based on their season’s match odds of 32.1. This implies that whilst Chelsea were luckier than expected, Sunderland were unluckier.

Despite these caveats, using the match odds to model the finishing league table did prove fairly accurate; at least in terms of positions. No team finished more than four places away from expectation, whilst six matched it exactly and another five were within one place.

The simplest model for predicting the 2017/18 Premier League table is to assume that the past is the key to the future.

A Monte Carlo method with a large enough number of repetitions would arrive at the same answers, but this method is an easier shortcut. To demonstrate equivalence, the expected league points totals for the two methods are compared below. However, its shortcoming compared to Monte Carlo is that it provides us with no measure of error and variation. As a consequence it is unable to estimate the probability of finishing in each league position.

Predictions for the 2017/18 Premier League season

The simplest model for predicting the 2017/18 Premier League table is to assume that the past is the key to the future. Aside from other factors like new player transfers, the next table shows the number of times in the 100,000 Monte Carlo repetitions that each team (not relegated) finished first in the 2016/17 table, and by extension the probability of winning the 2017/18 teams and their implied fair odds. These are then contrasted with Pinnacle’s pre-season title winning odds to identify potential value.

Predictions for the 2017/18 Premier League season

According to our model, Manchester City, Chelsea, Arsenal and Liverpool all offer some value. This is at the expense of Manchester United and to a lesser extent Tottenham. Potentially, the outright Premier League betting market still overrates Manchester United as a dominant force after the Ferguson era and Mourinho as a manager. Alternatively, the model has understandably not considered Manchester United’s high-profile summer signings of Romelu Lukaku and Nemanja Matic.

A significant drawback of this model is that it requires a completed season of results to make inferences about the next one. However, there is no reason why we should restrict ourselves to this limitation. We could, instead, choose to run the model based on the games played to date, or on a rolling basis over the last 38 matches, updating our modelled probabilities and implied title winning betting odds as we go along.

Of course, we would also need to take into account real points already won as the season progresses. Such a Bayesian approach mimics a method of statistical inference where the probability for a hypothesis is updated as more evidence or information becomes available. We could also repeat this methodology for other markets like Premier League relegation betting and a top-four finish.

Although this model is simple, it evidently makes predictions that are not wildly dissimilar to those made by Pinnacle’s traders.