get the best odds and biggest payouts for Champions League betting.

Get the latest Tottenham vs. Liverpool UCL final odds

A close look at the Tottenham vs. Liverpool odds

The odds indicate that Liverpool are most likely to lift the trophy. The favourites are available at 1.543* to win the competition. The betting market is also favouring a lower-scoring final with Over 2.5 Goals currently priced at 2.150 which could offer value to bettors.

Naby Keita is expected to be Liverpool’s only absentee.

Tottenham could be without three players due to injury, with Jan Vertonghen and Harry Kane suffering ankle injuries and Harry Winks suffering with a groin problem. 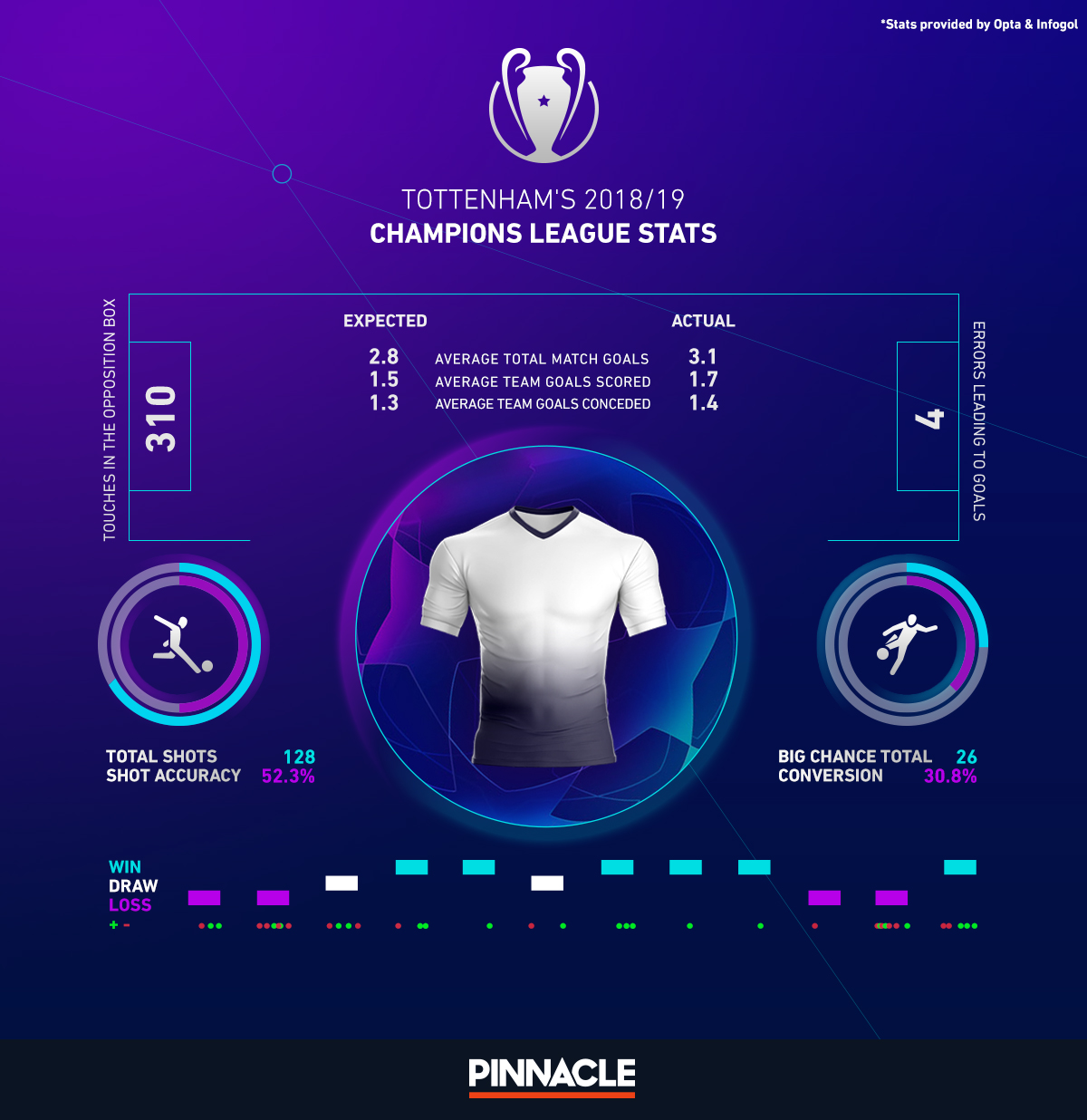 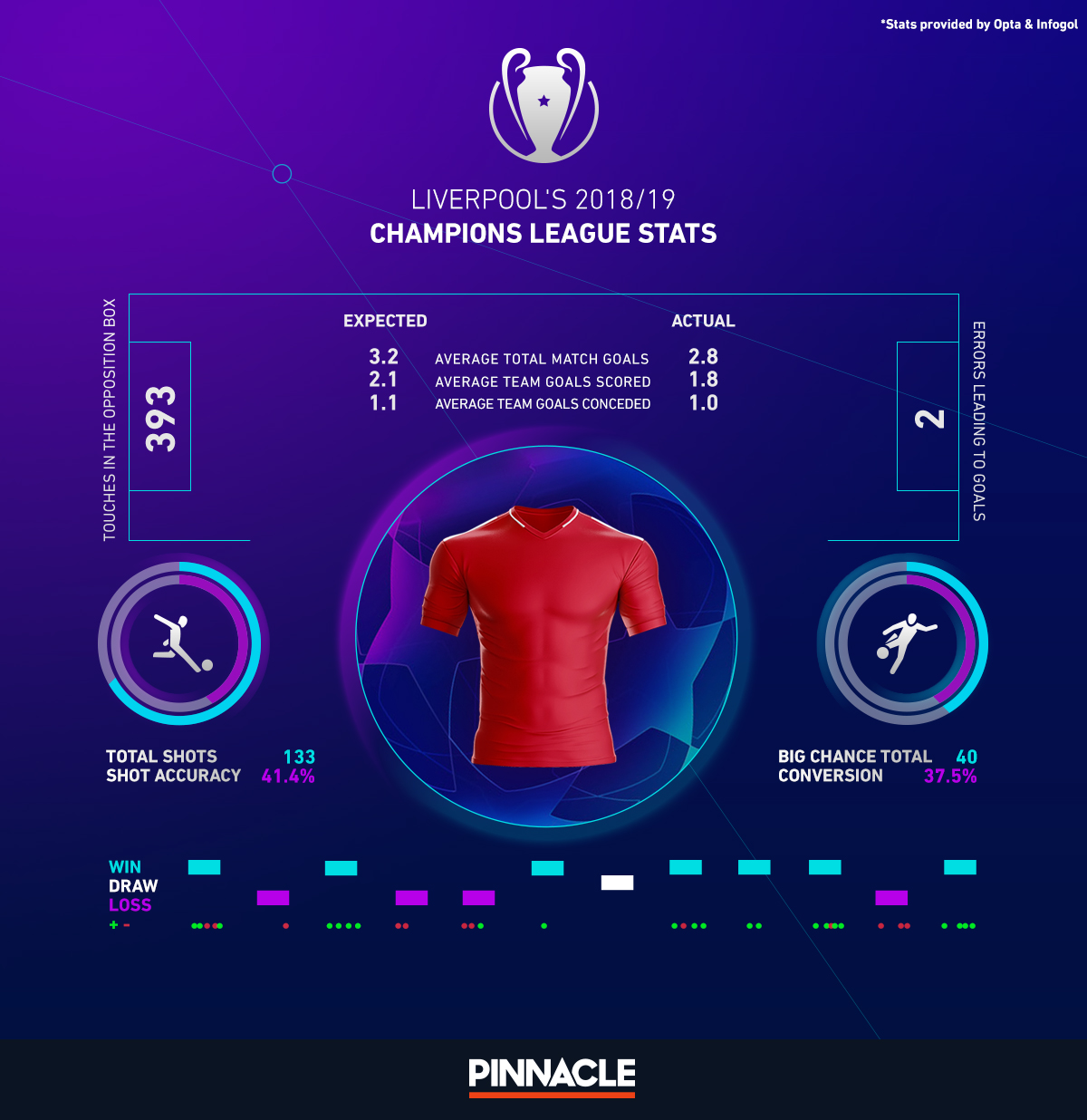 Inform your Tottenham vs. Liverpool prediction

Tottenham come into the fixture with Liverpool after a heroic two-legged victory over Ajax and will be playing in their first ever European Cup/Champions League final. In an unlikely turn of events, Brazilian attacker Lucas Moura managed to grab a second-half hat-trick to secure an extraordinary 3-2 win in Amsterdam and send the London club through to the final on away goals.

When analysing the semi-final using expected goals data, Ajax had an excellent thirty minute period in the first leg in London and it was nearly enough to take them to Madrid, but Tottenham outplayed them overall. Spurs heavily dominated the Dutch side throughout the entire second half in the return leg and their persistence and drive earned them a deserved comeback (xG: Ajax -1.66 - Spurs 3.28).

Tottenham took 7 points from their final three matches in the group stages after a dreadful start - including a draw away to Barcelona, which meant they edged out Inter Milan before a resounding win over high flying Bundesliga side Borussia Dortmund. They then had a seesaw battle with domestic rivals Manchester City in the knock-out rounds before beating Ajax, who had previously knocked out Real Madrid and Juventus, which demonstrates that the North London club will be a live underdog in Madrid on June 1.

"The Merseyside club have lost just once in their last 23 games in all competitions, including two victories against Tottenham"

When analysing the expected goals data, Liverpool were unlucky to lose so convincingly in the first leg, but they also still controlled the match for long periods, as well as having created some good chances. (xG: Barcelona 2.15 - Liverpool 1.58). The second leg saw The Reds run out the convincing winners (xG: Liverpool 2.29 - Barcelona 0.78). They were clinical in front of goal and justifiably qualified for the final despite having two of their most inspirational players in Salah and Firmino injured.

In the group stages, Liverpool did show vulnerability by losing all three away games, and that shows they are a side that can be tamed if you are tactically astute. Domestically, they have been outstanding, only losing one league game and finishing one point behind Manchester City. The Merseyside club have lost just once in their last 23 games in all competitions, including two victories against Tottenham, but only by a single goal margin, ending in 2-1 wins.

A further positive for Liverpool coming into the final is that Tottenham have conceded an average of 1.79 GA per game in the Champions League this season, showing that they have been defensively vulnerable, and with the attacking talent available to Jurgen Klopp, it is hard to see a scenario where Spurs can keep their attacking trio at bay for the full 90 minutes.

Sadio Mane will go into the final as Liverpool’s most in-form attacking player and he could be the difference in a key battle against Kieran Trippier. The Tottenham and England right-back has endured plenty of criticism this season, and with Andy Robertson providing the Senegalese international extra width it will be an area that Jurgen Klopp will feel he can exploit.

While his goalscoring ratio has improved, Mane’s all-round game has stayed at a similar consistency, recording comparable numbers in terms of key offensive stats. This would suggest Mane has become more clinical in front of goal, taking his chances more often, with the 27 year-old  averaging 2.4 shots per game this season, in contrast to 2.8 last campaign.

In terms of dribbles, he averages 1.5 per year this season, down from 1.9 last season and 2.5 the season before. Mane has also amazingly only recorded one assist in the Premier League this season, compared to seven last season, leaving a lot of the key passes to Salah.

Trippier has been accountable in defence for key errors at times for Tottenham this campaign, and whilst he is fully capable of providing a threat when attacking, it will be the defensive side of his game that can potentially be exploited by Liverpool.

Tottenham vs. Liverpool: Where is the value?

Tottenham have just one win in their last 14 fixtures against Liverpool, and The Reds are the superior team, whilst they will also be looking for redemption after last year’s heartbreak against Real Madrid. What Liverpool did against Barcelona gives them the perfect chance to do this against Tottenham and odds of 1.531* to lift the trophy potentially offer value.

With the attacking ability in both sides and the vulnerability Spurs have shown defensively against quality opposition in this competition the final has potential to be a high-scoring affair, although the line is favouring a lower-scoring match. Over 2.5 Goals to be scored in the game is available at 2.150 which could prove to be a value bet.

Bettors looking to alternative markets, the last time a Champions League final failed to see both teams score was back in 2010, so eight finals in a row have witnessed both teams scoring, and the same has happened in seven of Jürgen Klopp’s nine matches against Tottenham, which suggests the probability is high that both sides will find the net at some stage.